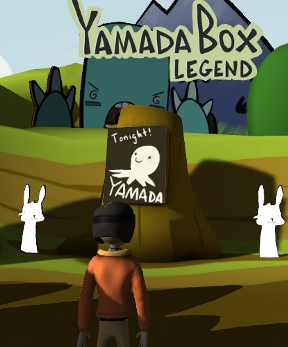 Who knew that everything through the looking glass was actually made of cardboard? Yamada Box Legend is a quirky fantasy game that sends you spiraling into the Cardboard World after being the stooge for a magician's vanishing act. A team of students calling themselves Arcane Kids, including Tom Astle (creator of Spikes Tend to Kill You), produced this graphically pleasing puzzle RPG adventure that will draw you in with its bizarre characters and engaging gameplay. In this Lewis Carroll-esque 3D world, you take on the task of exploring different cardboard realms, led by the helpful (and perhaps sinister) nudging of various rabbits. Filled with mischievous characters and challenging environmental puzzles, the only thing that may prevent you from hopping right into this surreal delight is a severe case of leporiphobia.

To explore the critter-filled world you've found yourself in, you'll need to use the [WASD] or [arrow] keys to move yourself to and fro and the [spacebar] to jump. Move the cursor to rotate the camera and to direct your character's movement. Left click in order to pick up objects, hold down the right mouse button to target, and then left click once more to toss the held item. Scattered about the game, you'll find different boxes with portals to new worlds, and it's up to you to jump in [E], solve the problem inside, and jump back out [Q].

As you wander about, be prepared for instructions or requests from a carnival of creatures. An angry bear needs your help, a mob of rabbits wants you to obey, and a gerbil desperately wants to save a princess. Each box in the game transports you to a different place, though some are for moving from one level to the next and others have the problems you need to reason through that will help you succeed. The puzzles presented may seem straight forward in the beginning but as you delve deeper you may find yourself scanning the screen frantically for some type of clue, whether real or imagined. The cluttered landscape of jumbled magician's tools will seem less like a behind the scene's tour and more like a descent into a rabbit takeover.

Exploring this imaginative little cardboard universe is made all the more entertaining by the well paired music that accompanies you through the various challenges. The camera angling can sometimes be awkward, and if you're using a Mac with a single button mouse or touch pad you may find yourself having mild difficulty with the controls. However, in the face of the humorous dialogue and nicely crafted brain teasers, it's possible to endure the added challenge with a Cheshire Cat-like grin. Unlike some other Unity games, Yamada is crisp instead of clunky and shows a promising example of the great direction NoxiousHamster can take this tantalizing hybrid.

Grab the key and give it to the rabbit

Is that the end? I got the ending where

I jump in the trapdoor behind the gerbil and several of the animals look from above and close the door.

apparently I need a separate plugin to view the content... it's not working in either Chrome or Firefox, can someone help me?

@Rachel
It's a unity plugin. Google it, it's the first result. It's a pretty quick download and works immediately (on Firefox at least).

@Rachel: you need the Unity player plugin (click the 'plugin info' link just under the game title in the review header above). As far as I know, it is only available for Windows and Mac OS, though.

For some reason this game doesn't respect my mouse. I was doing fine with trackpad until I saw the throwing controls, which are impossible on my trackpad.

I'm unwilling to aim with trackpad and click with mouse, so I guess I can't play this game.

Help! I am stuck at the

Any hints on how to beat it?

Might come back to it but so far, mouse just keeps getting lost - this is in Firefox 9.0.1

thinking inside the box.

That worked! Thanks MC!

Grab the key and give it to the rabbit

@Yaddab: You want the mouse to disappear. Once you click inside the frame you use your cursor to turn yourself in the direction you want to move, and also to look around. If you want to have your cursor back all you need to do is press ESC.

Was all counter intuitive for me - Ill try again

I'm having the same problem that Ezra had--it's a cute game, but seems completely impossible to play with a trackpad, even with Lion (which allows two fingers down to serve as a right click under most situations). Has anyone found a workaround?

@dsrtrosy: That's weird. I'm on a Mac with the two-fingers-right-click on and it worked just fine.

For all the people having issues with touchpad and the throwing mechanism- I emailed noxioushamster to let him know of the issue and hopefully it will be resolved or he'll email back letting me know if there's a way around it. One possible solution may be to key bind one of the clicks. If you're on a laptop (not sure if it's the same for macs) right click on the touchpad icon on your taskbar and click on properties. There will be a tab for buttons, go ahead and mess around.

this game looks really cute, but I can't rotate my character at all. The game just doesn't seem to respond to my mouse movements. He'll kind of twitch his head, but that's it. As a side note, I have no problem with the throwing mechanism, and I do have a track pad. but the lack of rotation means I can't aim, only move my character forward, backward, or sideways. Depressing.

Just a quick problem to point out in case anyone else has this issue (this seems to happen all the time with unity).

At the end of the game:

Specifically after the gerbil kills himself. If you are standing directly in front of him the lower half of his body sometimes blocks your path to the exit. The only way I was able to get by was to pull the dice out of the sword world and use it to knock the body over. This could easily make people give up because of a programming error.

Guess it's more of a note to the programmer but hopefully it helps someone else :)

On a Mac, I don't know a way to bind a key to trackpad buttons.

When I use my trackpad, I have the obvious problem.

When I use my mouse, I have the same problem as Callidy: it doesn't seem to get my mouse movements, even though it gets my mouse clicks.

Good news for everyone having problems with the throwing mechanism:

We have just uploaded a new version that will give you the ability to use the [C] key to pick things up, throw and aim with [V]. Just reload the page to get the latest version.

Tom informed me that it's a little clunky because he just implemented it but it should help with throwing. Hopefully this will also help anyone who was having movement issues, though please remember that you need to be clicked into the game screen. You should not be able to see your cursor at all.

Thanks for the fix!