Ed Ryzhov's Xonix 3D 2 is an interesting little beast... a 3D take on the dice-em-up arcade avoidance of games like Fat Slice, complete with power-ups and a super funky techno beat. Using the [arrow] keys, your job is to drive the ball across the field to create a line that will raise up whatever is on the other side of it... providing it doesn't get hit by an obstacle before you're done drawing it, or you don't run into it yourself, of course. The goal is to cut off a certain percentage of each level, and as you play, everything from speed boosts, to score bonuses and even hazardous fireballs will drop from the sky. Later, some of the obstacles bouncing around within each level's confines will even be able to chip away at the walls you build when they bounce off! 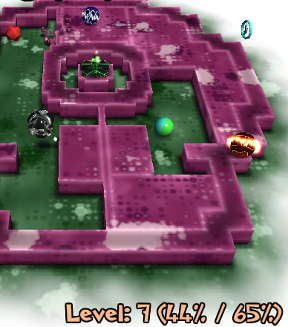 Xonix 3D 2 is a fairly simple twist on a fairly simple game, but it's fun and energetic in a way that more arcade games should be with its myriad of power-ups... and power-downs! The main problem is that the level design and overall difficulty can be sort of erratic, with some stages just not that interesting compared to the obstacles and setup of others. (Also, why can't you press a key to restart or advance a level if the rest of the game is keyboard controlled?) It just feels like the sort of thing ripe for the flashy, chaotic feel of classic arcade cabinet games, and if more of the levels had embraced that with the Tesla towers and explosion launchers, it would have been a magnificent thing to be hold. As it is, Xonix 3D 2 is fun and creative for such a simple idea, and with what feels like a very '80s style and flair to its colourful looks, makes for a great coffee-break style diversion.

I LOVE THIS GAME. Did the whole thing in about an hour. Is there more.. Or is the maker going to make more? Thank Indian