Ever since the days of Mario, games seem to have some sort of obsession with mushrooms. The adorable little worms in the puzzle game WRRRMZ! by Ian Snyder, seek to keep this obsession alive. Using your mouse, the object is to touch each mushroom only once to light it up, and get your head to the next worm hole. The trick is you have to stretch the worm out to its full length, or it doesn't count. 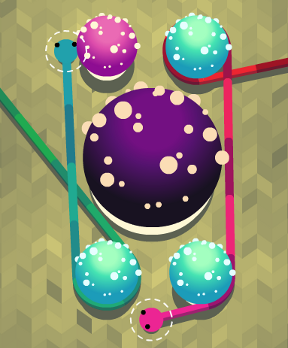 Don't let the cute lull you into a false sense of security. The puzzles get pretty darn tricky, so it's nice that there's a skip button. Later levels introduce purple mushrooms which must be touched at least twice, and blue worms, who don't like to be touched by other worms, both of which ramp up the difficulty. If you can manage to solve the first 45 levels, some bonus levels will unlock for you. A reset button would be nice, and often the phrases the worms say when they get near the hole don't disappear, so the screen can get cluttered in what is otherwise a clean, simple interface. WRRRMZ! is a delightfully unique puzzle game that you'll be tangled up in in no time.

I agree with the review: this game could really use a reset button.

Does anyone know how to pass level 14?

I can't figure it out.

Quite fun, but surprisingly difficult. I keep leaving the game because I can't figure solve a level, only to come back an hour later to try again.

@starbeamrainbowlabs:
[spoiler]The bottom worm goes around the bottom right and upper left mushrooms and into the top hole. The top worm does exactly the same, mirrored. Make sure you go around the mushrooms the long way--they should be mostly encircled.[/spoiler]

Game creator here, thanks for the review!

regarding: "often the phrases the worms say when they get near the hole don't disappear, so the screen can get cluttered in what is otherwise a clean, simple interface."

This was due to a glitch which has since been corrected. If a new version isn't already up, it should be up soon! :)

Good game! But the last level was confusing. It left me wondering if I finished it or even if there was a last level... Anyone figure it out?

It looks like this game is mistagged; 'windows isnyder' should be two separate tags.

Looks like a really fun game....Unfortunately, after the "So good" blue screen shows, It loads a black screen that says "UH OH! The sitelock has been triggered :/"
Using latest versions of Google Chrome and Flash
and disabled adblock

This game is beyond adorable. Wish the gibberish worms could narrate my life.