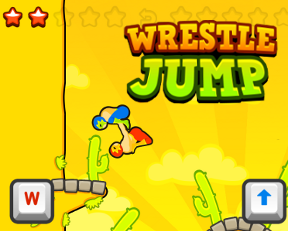 There's a part inside every one of us that, on occasion, just wants to smack someone's head to the ground. Otto Ojala has made this possible (in a safe a civilized manner) in his entertaining one or two player fighting game Wrestle Jump. And with only one button to push, the game is a cinch to learn.

At the start of each round, two burly men in Mexican wrestler attire are locked in battle. Push the up [arrow] on your keyboard to kick your leg against the arena floor to try to throw your opponent's head to the ground or wall. Your leg always points toward the ground (apparently these men are contortionists on the side), so even if your head looks guaranteed to smack the earth, there is a chance to save yourself. You play several rounds, with the arena changing each time, until one person fills up their star meter. At this point that player wins the game. If you like a little more variation in your arenas, or a set number of rounds isn't enough for you, head to the options menu. There you can turn on ice arenas or endless mode. Whether you are playing solo, or beating up your best friend or co-worker, Wrestle Jump will have you laughing and shouting "take that, you mask wearing fool!" in no time.

I officially luv this game, reminds me of Foddy's Pole Riders, both are absolutely amazing micro games A+

needs a pause button though