Jumping on the picross wagon with a new downloadable release is World Riddles: Seven Wonders from Funny Bear Studio. Similar to the World Mosaics series, World Riddles sends you on a journey as you fill in picross grids across the globe, learning about the Seven Wonders of the Ancient World as you go. One key difference here is the addition of mini-games, small diversions that break up the logic puzzles for a quick round of jigsaw, picture completion, missing objects, and more! 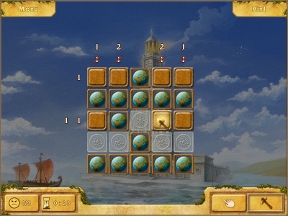 New to picross? Never fear, World Riddles has a nice introduction to walk you through the basics (it's skippable if you know the drill). The general idea is to use the number clues above and to the left of the board to fill in and wipe clean squares on the grid. If a set of numbers reads "2 1 4", for example, you know that two adjacent blocks are filled in, followed by at least one non-filled space, a single block, and then four adjacent blocks. Using intersecting clues, you can eventually chisel out a picture from the grid.

World Riddles: Seven Wonders awards you a medal for each level based on how quickly and efficiently you completed the puzzles. You're allowed three mistakes per picross grid, and there's a hint system to give you a nudge when you need one. Outside of the box filling, you'll encounter a good variety of mini-games such as missing object puzzles, jigsaws, tile swapping riddles, and more. For the most part, the mini-games are a nice diversion from the main game, but you won't find anything ground-breaking in these diversions.

Completing stages also unlocks bonus levels from the main menu. These special challenges are focused on collecting as many points as possible by completing a series of picross puzzles without making a single mistake. This may not sound like much, but when the added of pressure of "no mis-clicks" is applied, you'll think twice before filling in a space on the grid. 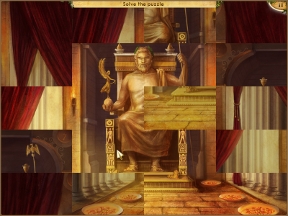 Analysis: The all-important interface is the key to success in any digital version of picross, as emulating the ease of a pencil and paper setup can be a tough challenge to complete. World Riddles keeps it simple with "fill" and "don't fill" icons at the bottom of the screen, allowing you to switch between cursor modes by [right] clicking the mouse. In the options menu you can change the right button's function to permanently stay as "don't fill", which was my preferred method for quick and easy picross completion.

Puzzle difficulty has a gradual and smart curve, starting out easy in the Library of Alexandria and adding bigger, more complex puzzles as soon as you move to the next wonder. Picross veterans will have to slog through the first dozen stages before anything interesting comes into play. When you get there, though, over 200 puzzles are awaiting your expert eye, a respectable challenge for any picross game to present.

World Riddles: Seven Wonders keeps everything simple. The interface is smart, the visuals are clear, and the game doesn't attempt to throw any gimmicks between you and a good experience. It's a wonderful addition to the expanding family of picross games and will provide hours of challenge and entertainment. And maybe a few neat facts about the statue of Zeus at Olympia.