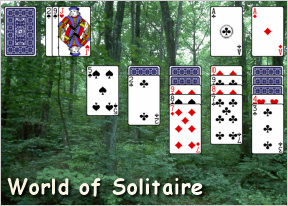 Solitaire is as solitaire does, but sometimes a version of the classic card game appears that makes it feel fresh and interesting all over again. Enter World of Solitaire, a sleek and highly customizable DHTML version of solitaire (no Flash, just Javascript) created by Robert Schultz of Cosmic Realms. It's the next best thing to sitting down with a deck of cards, only now you can sneak in a game or two while you're at work.

Everyone and their uncle knows how to play at least one version of solitaire. World of Solitaire includes 22 varieties of the single-player game. That's... that's a lot of solitaire. From the classic Klondike to Scorpion, Pyramid, Yukon and others you probably haven't even heard of, the whole gang is here, complete with instructions on how to play.

Aside from the sheer number of games available, what makes World of Solitaire actually worth playing is the options palette. Don't like the table background? Change it. Don't like the look of the playing cards? Choose a new theme. Want the cards to animate faster, a sharper-looking deck, or the computer to auto-play obvious moves? Go for it. Customize to your heart's content, but don't forget the timer is running and there's a game to be played.

A simple game everyone loves can be ruined with poor design choices, but in the case of World of Solitaire, it can rise to a new level. Forget about that game of solitaire buried on your computer and revisit the classics in style.

That was fun..is there no sound? I feel like there should have been sound..but maybe that was just my longing for triplejack to be back :) I use to play solitaire all the time when I was little and that was a nice little nastalgic game with a goood new flavor.

Cool! I've been looking for some new online versions of Klondike and Pyramid, etc. to play!

Oh, how nice. I am currently using the oxygen deck style with a lovely customized background... very slick. DHTML's nifty.

Great to see this here! I discovered World of Solitaire some time ago, and have been playing it on and off since then. It's been a while since my last visit, though. I see there's a new deck now.

how do you complete a stack? whaT'S with the aces?

Up to 48 games now (including variations)

This has got to be one of the most overlooked gems on this site!

I truly appreciate the hard work and altruism necessary to create this game page for the enjoyment of a world of total strangers.

After retirement, I turned to the internet as a daily viable connection with the outside world. I have enjoyed untold hours playing Klondike Solitaire and appreciate your efforts immensely.

My personal favorite games are Clock and Baker's Dozen, because they are easy, and World Of Solitaire currently isn't blocked at school, which makes it a great time waster.
/commenting on old review

At random times and for no apparent reason, the game terminate in the middle of play. The stacks go through animated "explosions," form into rotating rings, and perform other graphic gyrations that would only amuse a 3-year-old, and only require a 5-year-old to code. What's the point in offering solitaire games where you can play halfway through, only to have the game ended arbitrarily. I tried communicating with the author, but he only suggested that it was some problem with cookies or temp files, which is B.S. -- it's a feature that he built-in, for no reason I can think of but to annoy users. AVOID!!!!!

4,928 Views
1 Comment
chrpa— Jayisgames needs your help to continue providing quality content. Click for details It's always a perfect time for a hot spring bath, but at the end of winter it's one of the best things you can wish for. Unfortunately, unless...  ...