Picross has returned in World Mosaics 2, a brand new puzzle game from Fugazo. Fans of picross (also known as nonograms, paint by numbers, picture crosswords, etc.) will appreciate World Mosaic's straightforward interface and attractive visual design, while everyone else will get a great introduction to the world of picross. Plenty of puzzles, both easy and difficult, and a little story thrown in for good measure make World Mosaics 2 a great choice for all types of puzzle fans. 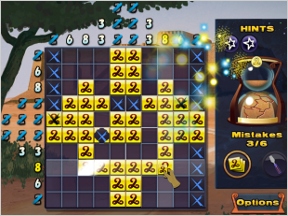 For the uninitiated, picross puzzles are logic puzzles where you fill in squares on a grid to form a picture. Numbers line the top and left sides of the grid, each indicating a number of blocks to fill. What they don't tell you, however, is how many empty spaces there are. For example, if a row says "2 3 1", you know there are two blocks that need to be filled in, followed by at least once space, followed by three more filled blocks, followed by a single filled square. By using logic you can gradually narrow down the possibilities until each segment is a certainty.

World Mosaics 2 puts a bit of a story-style spin on picross and picks up where the original World Mosaics left off. A strange hourglass artifact has thrown you back in time, leaving you stranded in a prehistoric world and shattering itself in the process. You stumble upon a diary entry from an old friend along with a bag of Time Tiles. Using these tiles you must solve "mosaic" puzzles (picross!) to help repair the hourglass and get yourself back home.

Picross is a pen and paper game, so making the leap to your computer screen can leave players scratching their heads. Interface is of monumental importance here, and I'm pleased to say World Mosaics 2 gets it right. To fill in a square, simply left click it. To mark a space as empty, right click it. To fill entire rows, simply click and drag the mouse. The game confines your drawing to that row or column, so don't worry about your cursor slipping, you'll be fine. To cancel a move, press the mouse button you aren't currently holding. Pretty simple stuff, but that's exactly what picross needs! 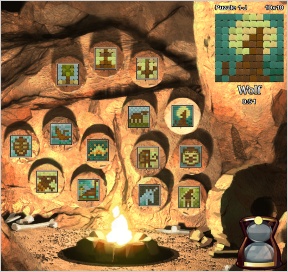 Analysis: I'm a bit of a picross fan, and by "bit" I mean OMGPICROSS!!!! Naturally this makes me a huge critic of the picross games out there. World Mosaics 2 falls squarely under the "yes" category, largely due to its attractive design and unobtrusive interface. It's easy to switch between filling and x-ing squares, and drawing long lines is a snap. The game only allows you to make a few mistakes each level, and mistakes include marking blocks that shouldn't be filled as well as x-ing squares that must be colored in. The latter is unusual in the picross realm, but it's not entirely unwelcome, as doing these puzzles is all about precision, not guesswork.

The story is one element that's entirely unnecessary in World Mosaics 2. I mean... who needs an excuse to play picross? Fugazo did a good job integrating it with the rest of the game in the form of diary entries after you complete each puzzle. At first I just clicked past, not bothering to read the paragraphs because I wanted to keep picrossing. Once I read a few, however, I realized they add a lot to the game. Most entries are quirky observations about the world from the time-stranded traveler's point of view, and any casual game that references Monty Python is ok in my book.

One thing you won't find too much of in World Mosaics 2 is challenge. There are around 200 puzzles to complete, and to be honest, they're all fairly straightforward. It takes some time to work through the early puzzles in order to get to the meat of the game. And when you get there, you won't have much to chew on. It was a bit of a disappointment for me, but like I said, I've been a picross fan for years, so only the more challenging puzzles will please me. World Mosaics 2 was designed for your average casual picross fan.

World Mosaics 2 is picross, plain and simple. No mini-games, no awkward gimmicks. If you like logic puzzles and don't mind a small dose of witty commentary, this game's for you!

I played the original World Mosaics to the end and loved it. I'm glad to see that the sequel is finally out. I'll be playing this as soon as I can.

Bought it. This reminds me of Gemsweeper, which I loved.

It is a very pretty picross game, and probably a good place for beginner players.

Drawing it out, realizing I have 1 extra space erase 1 off the end of each (finding I know for sure where 2 fills are).

The puzzles I completed in the demo never went above 10 x 10 so they weren't that hard, but I'm assuming they become more difficult later.

Also, making a mistake and knowing about it feels like unwanted advice. It is far more helpful than the hint button, that just puts random pixels on the board.

I would rather not be told about my mistakes unless I was stuck and I could use the hint button to error check. Maybe an option in WM3?