There's no beating around the bush with this one: Words & Cards is the combination of a word game and a card game, and playing it is just as easy as the title suggests. In this multiplayer game by Royal Palm Games, you've got to make a word using the pool of eleven letters that you share with your opponent. You earn points for the consonants you use in your word, and those consonants are converted into playing cards, with which you can play poker-style hands to grab more points. 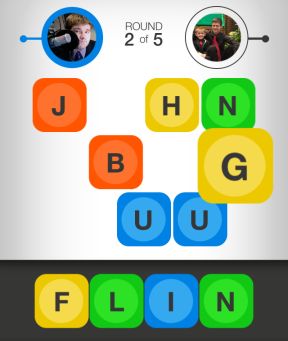 Each game consists of five rounds of you and your opponent making words and card hands, with the pool of letters replenished to eight consonants and three vowels between each turn. The harder a consonant is to use, the more points it's worth (30 points for a red Q or J, 20 for a yellow W or H, 10 for a green R or N). In the card phase, you must play (or discard) enough cards to reduce your hand to seven or fewer cards before you can finish your turn, so it's important to make not just high-scoring words, but also consonant-heavy words to give your hand more flexibility. You are also allowed to play two boosts per game, which can deal you a new rack of consonants or make all consonants worth an even 20 points, as well as affect how many points or cards your opponent gets in their next turn. Boosts can be purchased with in-game chips, although there always seems to be one random boost available for free.

After five rounds, the player with the highest score wins a small chip bonus, as well as the pot, if both players agreed to ante into it. As far as a gambling/poker theme goes, this is a weak point in the game's execution. Buying into an ante suggested by your opponent is completely optional, and since you're playing only with random players (for now) of whom you know nothing of their skill level, that's an okay thing, but it negates the point of having the gamble in the first place. If there were, say, a chance to raise the stakes mid-game (once you're more familiar with the player across the table from you), it'd fit a little better thematically, but as is, the gambling doesn't enhance the game at all. 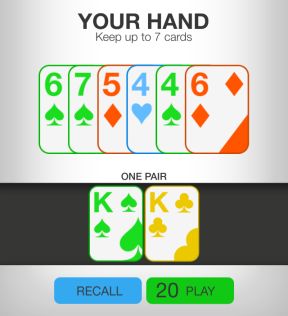 This missed opportunity aside, there's still a pleasant amount of strategy hidden in this game. Making a complex word with a bunch of red letters may be good for your score, but clearing out hard letters might make it easier for your opponent to make a longer word with an easier batch of letters. Claiming a pair of cards now can give you some easy points and get you below the seven-card hand limit, but discarding unmatched cards, while worth less, may lead to playing a more valuable two pairs later, or even a full house. Currently, you can only play against random competitors online (and it seems like you need to have a quick connection to hook up with their server), but buttons in the "new game" panel suggest that you should be able to play with friends or AI players in the future. The gameplay might be as simple as the title, but there's a lot of fun to be had with Words & Cards.

I agree with pretty much everything in this review. The gambling aspect needs work, and when you run into the "slow connection" error -- a frequent problem, judging from the many app store reviews mentioning it -- it can lead to various kinds of weirdness (mainly duplicate cards) that can actually corrupt the score of the game. That's pretty serious, but at least the developers know about the problem and have promised to fix it soon.

When it's working smoothly, this game has a lot of potential. I had 38 matches going at once the other night, and it seems that's the current limit. Yeah, it's kind of addictive.

Reducing my rating to two mushrooms on the grounds that the connection and score corruption problems have only gotten worse as more people start to play, and there's no sign of a fix. If one shows up before I completely give up on this game, I'll post accordingly.