When the world is in danger from the insidious Lord Nightmare, who preys on the dreams of people as part of a sinister plot, they need a hero... someone stalwart, honorable, trained in the ways of dream magic. Unfortunately, all they have is you, some lunkhead who crawled out of the bushes after a night of hard partying. Oh well. In Asymmetric Productions' Word Realms, you'll learn to defeat enemies in turn-based combat by spelling out words from a set of Scrabble-like tiles, learning new abilities as you complete side-quests in your adventure to save the world. Complete with inspirational '80s training montage! 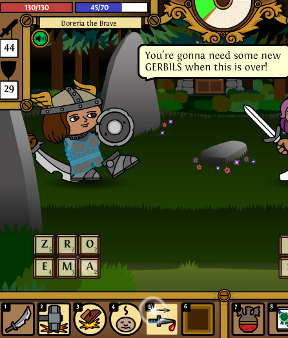 After a short tutorial, you'll be booted out into the world proper to begin your journey. Places on the map with an exclamation mark over them have a quest related to them, so click to travel wherever you please. In town, you can purchase items or upgrade your equipment, but most everywhere else will result in duking it out, librarian style, with foes. While swords and armor are important, your vocabulary is even more so, since the power of your attack is determined by the value of each of the randomly distributed letters you're given to spell with. Don't spend too long staring at your letter tiles, since the timer at the top of the screen ticks down until your turn automatically ends, whether you've spelled something or not. Instead of leveling up with experience points, growing stronger depends on defeating multiple types of enemies to achieve milestones. Pounding away at a certain number of skeletons, for instance, could lead to a permanent increase in strength, while defeating lots of intelligent enemies might mean you get a permanent additional letter tile in each battle.

Your questing is simply done by visiting locations and pummeling enough baddies until a story sequence triggers, but there are exceptions. Using your unique powers, you'll be able to capture the dreams of certain characters. Once done, you can enter into those visions to attain clues or free people from nightmares. These events are usually more puzzle oriented than combat related, tasking you to solve riddles, construct specific words from tiles using strict rules, and more. While some dreams are entirely optional, you'll still want to complete them to earn new abilities, since the longer you play, the harder the game is going to get. Making words is the easy part, but as enemies begin to get craftier and come with dangerous new skills and spells that can hamper you, you'll have to be more strategic too. Use abilities to scramble or destruct your foe's tileset, inflict status ailments, use scrolls with unique spells, or equip passive abilities to gain bonuses of all kinds. Once you rescue the village blacksmith, you'll even gain the option to buy a set of crafting tools to make your own equipment, like some sort of medieval, verbose Martha Stewart. 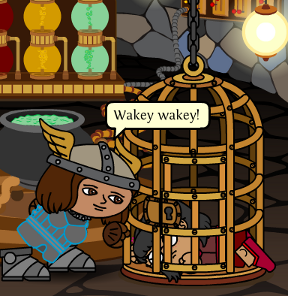 Analysis: Word Realms is one of those games that will absolutely devour your spare time if you let it. Not only is it easy to pick up and satisfying to play whenever you have a chance, but it's also compulsively playable in a "one more turn" sort of way that makes you look up in bewilderment and realise you were late for your appointment three hours ago. (I didn't need that heart surgery anyway.) Word Realms' best quality, however, might be its sense of humour, which is every bit as sublimely silly and wonderfully weird as you would expect from the creators of beloved online RPG The Kingdom of Loathing. Sometimes sassy and sarcastic, while others more subtle and surreal, the game keeps its plot moving with snappy dialogue and one-liners. It almost seems impossible to predict whether the game will recognise words and use them as taunts in a way that makes sense, with gems like "I'm going to knock your SOUP off!" coming on the heels of "My Monster Journal CITES several sources saying you're a loser!" or unexpectedly funny Star Trek references. Fortunately, if you feel the game missed the mark on its word usage, you have the option to tell the developers so by reporting improper instances after each battle.

The game can definitely feel a little repetitive at times. Lacking any real puzzle-solving or actual adventuring beyond the dream sequences, gameplay boils down to battling over and over in each area until there's nothing left to get out of it. But Word Realms is dedicated to its core gameplay in a way that means it's as engaging and polished as it can possibly be, and the result is what you could call the perfect marriage of word puzzle and RPG for the casual gamer. There are hours of challenging, funny, and smart gameplay to be had that make it hard to put down, especially as combat gets more varied and difficult later in the game. With a great sense of humour and a unique look, Word Realms comes highly recommended to anyone who likes the pick-up-and-play style of Kingdom of Loathing married with the think-on-your-feet action of Bookworm Adventures for one unique, clever beast.

Is a good game

Hell yes it's a good game. It's a great game. The author of the review missed out on the "puzzle aspects" of the game-- there are multiple games within the game. There's a mystery in the bar to be solved by talking to the patrons, there's a basement full of foes with unique abilities that you have to unlock to progress through, and there are endurance trials in a boxing-ring set up where you have to survive five foes in a row with unexpected attack and defense abilities.

There's also multiple ways to customize your play style... some of which are described in the review... but there is a crafting system that allows you to discover potions and armor recipes. Overall, an EXTREMELY interesting and fun game that I would recommend to anyone. I have given my friends copies as gifts and they *love* it, as do I.