Woodhead may be developed by a studio called Terrible Games, but never fear: that's just an example of the kind of sarcastic, hipster-ironic humor that the game uses as its backdrop. If you're a fan of The Onion, you'll love the interstitial newspaper headlines between the levels, but even without that, this is one of the most accessible yet challenging, straightforward yet never repetitive block sliding puzzle games out there, and the game takes full advantage of the strengths of the iPhone for its interface. 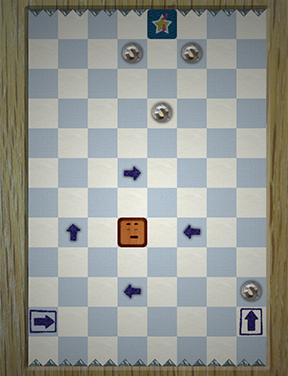 The core of the game is swiping left, right, up or down to make Woodhead go that direction. You'll have a star-marked goal to head for, a couple of shiny jewels to pick up along the way, and a goal number of "strokes" to beat in order to make par, like golf. Manage to pick up all the jewels at or under par, and you'll three-star the level. Three starring a level unlocks secrets and bonuses, but all you have to do to move to the next level is to get Woodhead to the star. This is generally pretty easy, and enables frustrated players to move on when they're stuck.

If it were simply sliding around a tiled board, it'd be pretty boring, but Woodhead includes an impressive number of other elements, such as keys and locks, expendable "friends", spikes and black holes, sticky goo, and more. In levels with friends (all of which can die with no penalty), the blocks all start the level asleep and can be woken up or put to sleep with a tap. 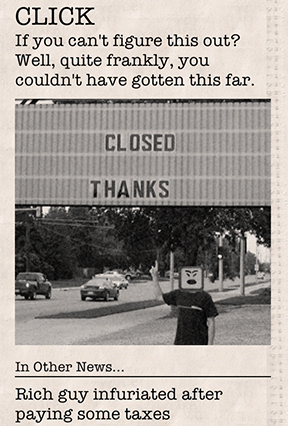 Analysis: The game requires a significant amount of spatial intelligence and planning skills to excel. You have to do things like place blocks or unlock locks the moment you pick up the item, so you have to be able to envision all the steps you're going to take towards the end of the level right then. This is exacerbated by the lack of a one-move-back undo button. All you can do is restart the level, even if you just made a swiping error at the last moment.

The snarky humor of the cutscenes and newspaper headlines between levels won't be to everyone's taste and may offend some. Again, it's really similar to The Onion, so you should have a good idea of what to expect based on your reactions to that website, or check out the screenshot for an idea. But even if it's not your cuppa, a simple tap to skip and you're back in smooth, relaxing, puzzling goodness.

NOTE: This game was played and reviewed on the iPad (3rd Gen.). Game was available in the North American market at the time of publication, but may not be available in other territories. Please see individual app market pages for purchasing info.