WonderCat! He's the greatest adventure there is... I mean come on, he's an adorable little cat in a sweet robot suit. His adventure started when he crash landed on an alien planet, and he now must find his friend and save him from doom. He's an inspiration to us all. Getting us to dream again and wonder about the world around us. Thinking things like "Why was this mine abandoned when there are gems literally floating the the air?" And "How are there still so many mining carts for a track that ended up in pieces?" and even "What the heck is Wondercat?" Well wonder no more because... He's... I don't know he just is. M4de's and MDCK Tech's new iOS and Android game, WonderCat Adventures, has you leaping from moving platforms, dodging furious bats, and trying too stay one step ahead of this fast paced gem. There are only 50 levels, all with beautiful graphics and a new score of music for each of the five areas, but those levels are going to last you a long long time as this game is quite difficult. It will have you testing your reflexes and doing your hardest to spot the false trails before you find yourself on the path to destruction. There are also 5 different bosses which have you trying to keep away and grab missiles as you go. There's never a dull moment when WonderCat is around. 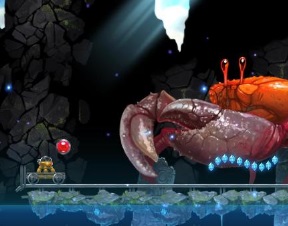 There is only one thing you can do in WonderCat, and one thing only... jump! Tapping on the screen makes your robot fly into the air, and the longer you hold, the higher and farther you go. Your suit is really good at this. Er... It's the only thing it's good at. It can't walk left or right, and hitting any spikes, lava, or bats will send you cartwheeling off the screen. So you must rely almost solely on the mining carts to make it to the end of each level, which is marked by a floating glowing piece of land. Thank goodness there is a lot of them. They also are kind enough to start moving if you miscalculated your landing, and will meet you if you haven't gone too far ahead. Once you've landed they keep moving, but this is where some of the trickiness begins. There is no "normal" speed for the carts and you can't tell how fast it will be going 'til it's already moving. In some levels you will have to hop from a few slow ones, until suddenly the next one you land on takes off. This keeps you on your toes through out a level... aaaaand it also means you're probably going to die a lot. This mobile game is full of tricks like these making every level a new guessing game. It's not really a game I'd suggest to those who are impatient, and in fact you're going to need to be able to handle a good deal of repetition, because after the first few that help you get started, making it through a level without dying is almost impossible. You're going to have to try, try, and try again to be successful. This won't be a game for everyone, but for those who like a challenge and have no issues with high death counts, and for a small chunk of pocket change you too can have all the wonders this feline does. So are you ready to take a leap of faith?