Newly discovered powers. Mysterious mentor. Evil controlling empire. Perhaps you're thinking these are the points for a superhero story. Well, then you'd be wrong as it's the points in the superheroine visual novel, Wonder City, designed by Naomi Clark and written by Phoebe Harris Elefante. You play as Ada, a seemingly normal high school student who discovers her ability to control Quant, the energy of the universe. 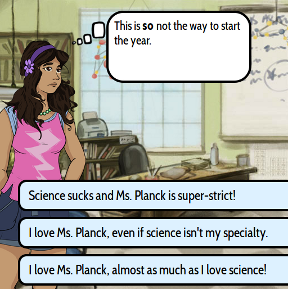 Created as a partner to the documentary Wonder Women!, this game sets out to create strong female characters who call upon the strength of real life strong females from history, encompassing a wide range from Amelia Earhart to RuPaul. Unfortunately, the constant insertion of these names is more distracting than impactful, but the rest of the writing is so well done that the name-dropping can be seen as a minor issue.

Wonder City is of 'lunch break' length, making it a relatively easy visual novel to get into. Achievements are presented as awards for the different ways you can play out the story including being collaborative in your efforts and being secretive with your powers and identity. With over a dozen of these achievements to earn, some of them opposing in nature, you're sure to play through several times to earn them all. Whatever message you take away from this game, it's a well written adventure that anyone can enjoy. So, by Oprah, get out there and start saving your fellow students!

A pretty neat game, although replay value is low for me. Kind of tedious to click through the whole game again; wish there was some way to access individual scenes to choose other options.

How is it a good thing to use influential women's names as epithets? Taking their names "in vain" seems really misguided, and it's even more confusing that the rest of the bowdlerized "swear words" are desserts...

I have a basic problem with this notion of promoting this short list of powerful women. No one would ever put Thomas Edison and Dr. Phil on the same list of *anything* together, but Marie Curie and Oprah are forced to share a podium because we're trying to round out the numbers of iconic females. I'm not sure of the point the authors wish to make, but if they have to look that hard for examples, their point must be a weak one.

Perhaps it would be better to educate people about the lesser-known women of history -- to use a male example, Nikola Tesla did almost everything earlier and better (and more ethically) than Edison, but wasn't good at promoting himself, and has only recently begun to enter the public consciousness. These unsung heroes need to become household names, rather than repeating the same handful of icons over and over.

P.S. Yes, I'm a white dude, not that it should matter for anyone who truly views the sexes as equal.

Song - Yeah, it can be kind of tedious, but at least if you quit the game in the middle of a playthrough, it saves your exact spot so you don't have to do it all in one sitting.

Strangelander - I do agree with your first sentence, but I would argue your assumption of why certain figures were included in the game. It's not so much that you should compare Oprah to Marie Curie, but I think the developers were trying to offer a variety of women to look up to for different reasons.

Strangelander, I get what you're trying to say, but simply because Oprah and Dr. Phil are associated together doesn't mean that she's a female analogue of him. And yes, while she's not the scientific genius that Curie was, she definitely is a landmark pioneer in media, comparable to Barbra Walters, so I think she can afford to have one hack psychologist on record. Media may not seem like a big deal in the scheme of things, but think about how women are usually relegated to the blonde news airhead or gameshow assistant. Making strides in media means more women/girls can more easily see a wide range of possibilities for themselves as leaders, which means more potential Curies.

The writing is pretty atrocious; it reads like an after-school special. Additionally, it's ripping off the name and basic concept of Wonder City Stories, a web serial about superheroes in a world where superpowers have helped even the playing fiend a bit for women, racial minorities, LGBT people, and other oppressed groups. I'd suggest reading WCS instead of playing this game. wonder-city.dreamwidth.org