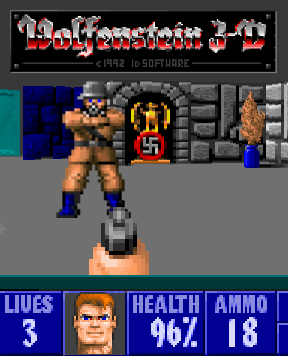 WOLFENSTEIN! Now there's something that feels like it should be cackled gleefully while backlit by dramatic lightning flashes. Bethesda Studios brings back Id Software's classic shooter for its 20th anniversary... in glorious HTML5! Wolfenstein 3D stars you as Captain William J. Blazkowicz, deep in Nazi territory with no other option but to blast your way out in the manliest, gunliest way possible. Use the [arrow] keys to move, [spacebar] to interact, and [X] to fire your weapon. You can hold down [shift] to sprint, and holding [Z] while pressing the left or right [arrow] key will allow you to strafe sideways rather than turn around. Take down enemies before they fill you full of holes, keep an eye out for delicious floor chicken legs, and above all... keep that eyebrow arched, soldier!

It goes without saying that Wolfenstein 3d's subject matter is somewhat controversial, but anyone who's played the game knows it's more or less the great, great grand-pappy of the 3D first-person shooter, and all other titles are just toddlers staggering around at its feet. For a lot of people, being able to play it in their browser is going to be a terrific blast from the past, while still more of you will make me die a little inside by pointing out you weren't even born in 1992. The default control scheme feels a little awkward if you're used to being able to aim with a mouse, though once you're in game you can customise the controls to something more to your liking under the options menu by pressing [esc]. Loaded with secrets, weapons, and battles galore, it's a good idea to play Wolfenstein 3D not just because it shows you how far we come, or what HTML5 can do... but because it's still just as entertaining today. Besides, who can deny the important lessons it taught us... namely, that anyone worth their salt has at least three secret rooms in their place of residence, and eating chicken off the floor is not only good but good for ya.

It is laggy as hell on Firefox for me, unfortunately I updated straight from 9 to 12, so cant check 11.

It seems fine on Chrome though.

Just thought I would mention that in case anyone else has a problem with Firefox.

The addition of a save feature would have been a glorious addition to the game. 8 floors is a lot to do in one sitting.

It's hard to complain about the controls since it is a faithful port of the original.

This is a lovely gift from Bethesda, given that most game companies would simply celebrate the game's anniversary by trying to get you to buy it again. I'll likely spend some time this weekend playing through and finally finishing this game once and for all.

Alas, no cheat codes (don't judge me) and I didn't see an auto-map. Some of those higher levels are going to be hard without the map.

oh man -- Wolfenstein was the very first first-person shooter I ever played -- it was the hottest thing on the market, and it was pretty creepy on my black-and-white monitor. (hey, I was all that - I had black and white, not green!)

The only thing missing is the option to play with beeper sounds.

Unplayable on Firefox 12.0 due to lag and overly responsive controls; sounds like I should try chrome though.

Will it make you feel younger if I say I'm wistful for the ORIGINAL Wolfenstein? So far as I know no one has done a browser version of that yet, and they ought. The 3-D version way too new-fangled for me.

There is a better port in existence with many original features not available in the Bethesda/ID port. Just search for Wolfenstein 3D HTML5 in YouTube or Google.

Was playing this game for awhile on my work computer, now I keep getting an ERROR 404 message. I've tried refreshing the page, using different browsers, clearing my cache, almost everything the internet suggests but I still keep getting this error?? Buddy who works next to me plays the game fine on his comp and never has had this error.

Stephen and I are having the same problem, when I click on the Play Wolfenstein button I got ot the jayisgames page we all know and love but instead of the game there is a small 404 in the left hand corner of what would be theg ame screen. I'm using Chrome.