Getting paired with brash, bossy Alicia as your mentor on your first day at Elandryl Academy, where young witches and wizards are taught, seems like getting the short end of the stick. She's loud, rude, lazy, and likes making you do her work for her. Just when you're starting to think she might not be so bad, however, Alicia's impatience with her schoolwork and her thirst for bigger and better powers could wind up spelling trouble not only for you and your newfround friends, but the entire kingdom as well. Gee, never saw that coming. Wizschool by OWLOH is a stunning match-3 RPG hybrid for your iOS or Android in the tradition of Puzzle Quest that will serve as a fantastic introduction to the genre for casual gamers but is just as beautiful and addicting to us grumpy old veteran gamer farts. 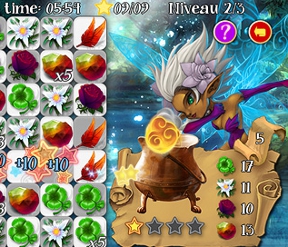 While Alicia and her trio of buddies will drag you along with them from place to place on their adventure, gameplay boils down to the various match-3 sequences. Mixing potions involves swapping icons around on the grid so that you match enough of the appropriate items to get all your ingredients, while playing poker sees you and an opponent taking turns to try to get all of your required symbols first. Winning helps you level up, which increases your attributes, so you'll want to do your best to be stronger for the battles. During these, you and your opponent will take turns swapping scrolls, potions, and skulls to attack each other or heal. If the timer isn't your cup of tea, try switching on to the "casual" setting of difficulty so you can play more at your own pace without feeling like you're under the gun. The more you play, the more potions and magic elements you can unlock to equip, which will give you bonuses that can help out. You'll even get gold you'll eventually be able to spend at a shop to beef up your stats in various ways, or you can just spring for some coins via an in-app purchase if you don't feel like grinding.

While there's no denying that as far as the gameplay goes Wizschool lacks the freedom to explore and complexity of Puzzle Quest, Wizschool's vibrant presentation and simpler, more easily accessible gameplay combined with the premise means it may cast its net wider and appeal to a broader audience looking for something lighter. The game is a knockout, with beautiful environments and imaginative character art (despite a surprise amount of cheesecake evident in the female designs), and the story remains bright and engaging despite a few small typos and familiar concept. It's effortlessly addictive, the sort of thing you can pick up "just for a minute" and look up to find an hour has flown by. On the downside, the time limit feels out of place, grinding is inevitable, and if you're playing on a small-screened device the scrolls during battles can be difficult to tell apart at a glance under pressure. The developers, however, have shown a remarkable willingness and desire to listen to feedback, and the balance and overall experience is constantly improving as a result. Though the corny, goofy premise and characters won't appeal to everyone, for fans of snappy match-3 style gameplay and lush design, Wizschool is well worth checking out.

NOTE: This game was played and reviewed on an HTC One S. Game was available in the North American market at the time of publication, but may not be available in other territories. Please see individual app market pages for purchasing info.

I ended up getting an Android phone instead of an iPhone because it was free, but I can't seem to figure out how to get the simplest things to work. For example, I tried insalling the demo of this game and on the Play Store it says it's installed, but there is no icon on the phone. I really wish this process was as transparent as iTunes, but I'm sure that criticism will get the Apple haters up in arms. However, this teaches me that I should never purchase anything for this phone without testing it in a demo first. I guess the game is lost somewhere in the ether between phone and computer.

Hi dsrtrosy! When I install games on my Android (HTC One S), they rarely appear on the home screen, usually on one or the other screens you can get to by swiping to the left or right. Alternately, you should be able to view your installed applications list and see it there. What type of phone do you have?

Thanks, Dora. The way mine is set up, they don't appear on any of the outer screens--I can only see them if I click Apps and then I have the option to move them out to one of those scrollable screens. Unfortunately, the game isn't downloading anywhere! So I have had to go to the Play Store through the phone, which sort of defeats the purpose for me.

Here's my transparency issue: I am in my Play Store account on my computer (using Chrome) and, at the same time, on my phone. The computer shows the game is installed. The SAME ACCOUNT looked at through my phone doesn't show it at all. So I will try downloading it through the phone. Just wish this process actually worked as advertised. It's very strange not to have a central, simple way of seeing everything.