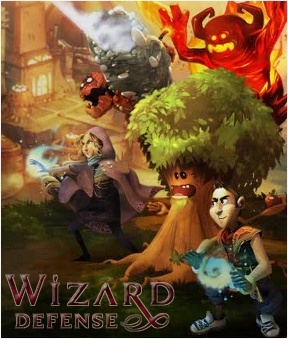 Touted on its website as one of "the world's best tower defense games," Wizard Defense is a new strategy game (still in beta) developed by Big Park, Inc. When it comes to presentation and graphics, I just might have to agree—I don't know if I've ever seen a Web-based tower defense game with such a rich back-story and polished UI. You play a young wizard who resides at the Espeon School of Wizard Defense, hand-picked by Edith—an "elder"—to defend the land from evil magic forces and monsters.

Your towers are called Elementums, each drawing its power from an element like wind, fire, earth and so on. Unlike many element-based TD games though, there are no gems or detailed resources here to play with. It's a pretty simple design, actually. You begin with just two Elementums; Leafros (a tree) and Voltoss (a storm cloud). Towers cost "Lumens" to build, which is basically the game's magical equivalent of money (you earn Lumens for each monster you destroy). Each of your towers can be given one "boost"; power, speed or range. While the towers cost different amounts of Lumens to build, the boosts always cost the same amount.

The boosts are pretty self-explanatory, especially for TD fans. However, since you can only give towers one boost each, they're pretty extreme (especially the range boost, which also improves critical hit chance). The speed boost doubles your attack speed and the power boost really increases damage a considerable amount. Lastly, boosting an Elementum also enables a secondary, inherent ability, such as temporarily freezing enemies or causing area-of-effect damage.

The controls are standard fare for this kind of game; just point and click with the mouse. Each stage of the game consists of two levels with around seven or eight waves of monsters. Your character is positioned at the end of the path, which would represent the "base" in most other TD games. You have 10 points of life, and lose them if enemies are able to get past your towers and attack you. 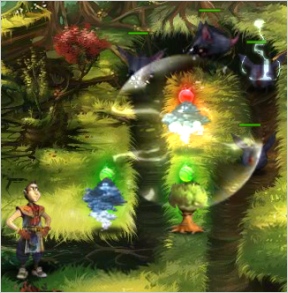 Your character doesn't just serve as decoration, though—you can also cast offensive spells that damage monsters and supplement your Elementums. You'll learn these spells—rather slowly—as you progress through levels by earning "medal points." At the end of each quest, you're awarded a bronze, silver or gold medal depending on your score. Each medal is worth a different number of medal points that unlock spells, like the "Magic Bolts" spell that lets you target monsters directly, or the "Fire Wall" that you can place down across the path to damage any monster that passes through it.

Analysis: Story-wise, you might liken Wizard Defense to the Harry Potter franchise at first glance. The whole "young-wizard-at-a-magic-boarding-school" is a bit similar, even if only in premise. It's the back-story though—along with the highly-polished website and fleshed-out characters—that actually confused me at first, wondering if this was some new intellectual property like a novel or cartoon that was licensed into a Flash game to promote it. Typically, you just don't see this kind of production value in independent Flash games (especially in the tower defense genre, which is still primarily a grassroots movement). It's got its own Web site, complete with professionally-drawn art with lots of written story behind it, and even a forum section. More importantly, this production value is evident in-game as well, with great animation and sound, gorgeous backgrounds and an overall gloss that's usually only found in downloaded games.

That being said, the first question is whether or not the gameplay lives up to the standard of its packaging. The answer? Almost. First of all, the game is labeled as still in beta. While there's not many bugs that hinder gameplay aside from the occasional UI overlay hiccup, it might suggest that the developers are still tweaking things behind-the-scenes, like enemy hit points or other balance mechanics.

Even though there are three levels of difficulty available, some tower defense veterans might find Wizard Defense a bit on the easy side. That's not to say it's a cakewalk; the medium and hard modes offer fewer resources and tougher enemies, and will pose a challenge to most players. The overall mechanics are a bit simple for this genre though, suggesting that it was designed to be accessible even for a pre-teen audience.

However, that doesn't stop Wizard Defense from being one of the most impressive TD games I've ever seen. Aside from the ending coming a little too quickly (and for some, requiring registration to play past the first quest), there's not too much to complain about. Multiple path routes and a variety of tower and spell abilities offer just as much strategic fun as any other defense game. Rooted by its rich story and dazzling presentation, it's something that every casual gamer should check out.

Thanks for the suggestion, Ed!

Ohh! Looks Exciting! This looks like one of the better tower defense games!

Solid game, though the shortness is rather annoying. The main problem I had was that there was no apparent way to stop placing towers where you click. Most annoying.

this is an incredibly ambitious tower defense, but the viewing angle leaves a lot to be desired

...oh yeah...the creep visibility is pretty bad, too. Can't wait to see the final version, though. Looks like it could be the best tower defense out there, with some improvements.

It's as gorgeous as you say, but I had a real problem with the tower placement/upgrading lagging behind notices or the creeps. Every notice seems to take several minutes to appear. I have high speed cable wifi, so that shouldn't be a problem. Anyone else having lag issues?

This is a really great TD game. I'm just really stuck at the 2nd part of the 4th map in medium difficulty. It's hard with the placement and the grubs regenerations. Can anyone help me out on this?

Also, it'd be great if we can have upgrades after every map, like most TD games, instead of just having medals for additional skills.

two": the reason is it's simplicity. no tutorial needed; grab towers and place. I try and play other TD games but i get tired when I have to go through mind numbing tutorials that take the casual out of casual games.

hey, looks great, but at 4AM EST, I get a page load error.... so I guess i will have to hold off judgment until.... tomorrow?

I'm disappointed that you have to sign up to play more. I dislike signing up for stuff these days that doesn't seem to really need it. The free easy mission was fun. I did find the response to my clicks a bit slow, and I think it would have been nice to see the tower's stat when i highlighted it even if I already upgraded (I may be just missing this).

Excellent visuals, and the storyline just being there adds flavor to the game.

Yeah it has pretty graphics, but this game is way too short!

But all the verbose story line added nothing to the game. lots of info, but no real story line.

I am not sure that this game brings anything but eye candy to the genre... Just a lot of flash and noise.

With its placement and lag issues, not sure I am going to play this one again.

Gemcraft has ruined me for TD. Just holding out for Gemcraft 2.

Great presentation (although the story boxes get annoying after a while), but pretty shallow on the content side. I might check back on it when the final version gets released, but right now I can't say it's worth playing for more than a few minutes.

Well, it's very pretty. Unfortunately, my laptop can't handle all the eye candy very well, rendering the game almost unplayable after 4 or 5 towers have been placed.

Is there any way to reduce the quality, or number of particle effects or something?

I realize this is a beta but it seems to me there are some very basic elements they need to tweak before this game is ready for prime time.

What's up with ALWAYS having a tower "loaded" and ready to place? Several times I was clicking away at the upgrade button and mistakenly placed a tower I didn't want or need.

And why the three second delay between clicking the tower and being able to click the upgrade? In TD games three seconds can be life or death.

Technical details would be handy. What do the upgrades do? To what extent? How much damage am I doing to begin with? Then again to some players not knowing adds to the challenge I suppose.

Overall a game with promise to be watched.

Very pretty, but perhaps not so much in the way of substance...the core mechanic is, as other people have said, a bit too simplistic. Also, it's driving me mad that on most of the maps you can restart and just redo that map, but at the final and most difficult one, you for some reason have to redo the final *two* maps. This is really putting me off trying to complete the game, as it's essentially making you redo a level you've already passed, for no apparent reason.
The game is enjoyable enough for a bit, the basic idea is good and the graphics are nice, but ultimately it lacks depth.

waaaah! Everytime I try to play this game, it stopped at about 90%(that is my estimate)... What happened? It's a promising game and I can't play it.... T_T please help.