Worry not, witch lovers of the world! No witches were harmed in the making of Godseed's new tower defense game, Witch Hunt. In fact, it's the witch herself doing the hunting! Saucy young sorceress Lucrea has discovered that the giant crystal obelisk she's defending contains a demonic entity of greed, and any living thing that dies in its presence gets immediately transformed into money. And if a bunch of common sense-challenged goblins happen to try attacking her to steal it, well, she's only making the best of a bad situation! Using her mystical powers of fire, ice, and lightning, she'll drive away the goblin army and make a literal killing doing it. Oh, and something about getting the crystal to a magical tower or something, but more importantly, money. Swap between her three elements with [Q], [W], and [E], and aim her attacks with the cursor. You can click to fire at will, or even enable automatic shots if your trigger finger isn't that itchy. Blast away everything that wants to get its mitts on your crystal, and reap the delicious rewards! It's an intense, high-action, almost shooter-like take on tower defense, and it also packs a killer sense of humor. How many other games let you summon fiery penguins to do your bidding? 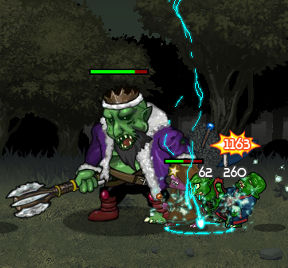 One of the first things you'll notice about Witch Hunt is simply how funny it all is. This is a game where you earn your first achievement in a cutscene, and one of your skills is known as "itchcraft" because Lucrea can't stand the "W" word. The artstyle also has quite a bit of character, with the smugly-grinning Lucrea staring down armies of scowling goblins with a twinkle in her eye. Be warned, however, that the game does feature sexualized "fanservice" elements, and while these can be disabled, they're on by default. But as for how Witch Hunt actually plays? It's a long, tricky tower defense game absolutely stuffed to the gills with content. Its thirty storyline missions are all seriously beefy affairs, where you'll be fighting off swarms of more than a dozen enemies all at once, over several waves. The frenzied nature of the fights means you'll need to give the game your full attention in order to beat it.

Although Lucrea only has three basic elements to work with, each one offers its own unique playstyle right from the start, and the games' enemies have strengths and weaknesses that require you to make use of all three elements. Each one can be leveled up in a variety of ways, and the game actively encourages you to swap between different builds by making it trivially easy to re-distribute upgrade points. In fact, there's no way to fully upgrade all your spells' parameters until you beat the game, requiring you to specialize your builds and encouraging you to experiment and develop a favorite way to play each element. Add onto this a wide variety of "Arcane" spells with various battlefield-changing effects, and the game truly allows for a plethora of possible strategies and playstyles. However, all these options means that Witch Hunt uses a lot of keyboard keys to swap between skills and activate Arcane spells, and during the heat of battle, it's easy to get finger-tied even for practiced typists. The large numbers of spells flying on screen also means the game is prone to slowdown. But slaying hordes of foes with a single well-timed lightning blast, or trapping an entire battalion of goblins in ice, is an epic feeling. Witch Hunt is a game overflowing with energy, challenge, and charm.

Can we please have a rule that developers have to study this in order to have a game appear on JIG?

Not sure which is worse -- the badly mishandled (pun intended) jyggle physics or a shot of the witch's knickers.

It's kind of a cool game...but let me know when you grow up, move out of your mom's basement and get rid of the gratuitous crap.

I disagree. Tight fabric and they do that. Not exactly like that, but they do that. Remember Epic Battle Fantasy? These are cartoons ya know. Lets see you animate some boobs.

what one more time

@SHA -- well, at least we know you definitely do not have bewbs and have never actually seen a pair in real life.

My point being it's kind of a cool game. There doesn't need to be any kind of attention drawn at all to the bewbs or the knickers. The game could stand alone without them.

A lot of animation doesn't mirror real life. Sometimes not even remotely. I, for one, like the cheesy anime-style fan service.

gamedev here. with a little plot reveal!
(was supposed to make it more obvious for the sequel but I guess a lot of people did not even notice the crumbs.)

Lucrea Quarta's character was based on the Seven Deadly Sins.
She is obviously no saint. In fact, the game's protagonist is even the antagonist in very different ways.

Unfortunately, most of the game's critics only noticed the 'LUST' part of her many other 'sinful' characteristics. And that reaction actually says a lot. (Greed even got seen-zoned)

STILL! Thank you, JIG for the awesome review and for everyone who played the game!

godseed, I think you quite misunderstood the concept of "lust" as sin. Is it her lust or the players that gets played on?

Dunno what it ought to tell.

Or let me say it that way, if you would have instead tried to portrait "lust" on a male character, would you had him as well by having him swing his sixpack and croch into the front of the camera?

So what does that tell us?

SURE! unfortunately, it was Eve who bit the forbidden fruit, which is who Lucrea was also based on. (geez i'm revealing way too much plot for the sequel already haha) If it was Adam, I have no problems showing crotches pecs or whatever. Later in the game there are enemies who lift. one particular male enemy even has lesser clothing than Lucrea. At anyrate, it's a game. it's fiction. I've done masculine and sexy in my previous games and projects. Anyway, my game, my plot, my direction. ALL WORKS OF FICTION. Thanks for playing!

Hi Dev, I really like your game. Appreciate that you can turn down the fanservice with an option. (I like 'em, but seeing it over and over is overwhelming) -_-

Love the humor also. Tell me how to play the cutscene again?

Tone down the ..I mean, max level Frost Rune with max Swarm combined with max Motormouth just owns the game. On the contrary, the fireball is too weak to be any use. I ended up beating stage 1 using a combo of frost and the 2nd thunder spell to blast anything immune to ice. No need to use fire at all.

Thanks! Please do play a bit more as the fire rune will surely have it's place. Also, you can finish the game without having to grind. just go at it. dying will still give you the gold you earned for the stage. and there will be a lot more in store for you.

Hopefully your ice build gets you far.

- Sorry bout the cutscene, tho. the only way to play it now is to start a new game. (It's my first as3 game, so the intro got a bit hard-coded)

you can flip between runes. In many other games I have played when you switch the countdown stops; it is nice that it continues in this game and you benefit by switching.

Discussing things with differing viewpoints is fun and constructive, except when things get personal and passive aggressive for no reason, so everyone please keep things as friendly and intelligent as I know you're all capable of doing. :)

Well, I just finished the storyline!
My main strategy:

I spent most of the time using lightning, with brief switches to ice to freeze something, or fire to pick off faster enemies or to repel slow, tough ones that are weak to it.

I made sure to keep Striker Pengu up as much as I could, he's great at picking off smaller targets and freezing the bigger ones. Fire Sigil works great to soften up any ground forces or take care of swarmer-type enemies that just die right as they enter it. Mjolnir into a frozen group for massive damage. Higher level arcanes only as emergency.

Also it seems that when you beat the game,

you unlock an infinite mode and some level limitations get lifted, so you can play with your build even further.

Overall, I loved it, but I couldn't help but wonder about one thing: if we consider ice to represent water, and lightning to represent air, we'll notice that an earth rune is missing. I'm sure there could be rock spikes, eartquakes and whatnot, but maybe it'd simply make the game too complex already. To reiterate, this isn't a complaint, merely a curious observation!
The ending also hints at future events, so here's hoping for a sequel.