Wispa Forest is a new hidden object game from Reflexive Entertainment. It immediately stands out from the dark and gloomy crowd of hidden object games with its gorgeous watercolor scenery and light-hearted storyline. Forget insane asylums, being trapped in castles, and relatives going missing while searching for ancient artifacts. Wispa Forest is about fairies, fairy friends, fairy enemies, and a curious little human girl, too! 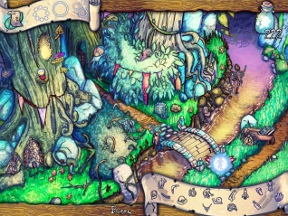 Corruption is lurking in the land of Underwood. A young Seed Wispa named Lyia is one of the first to sense this, and she immediately heads out to investigate. A curse is causing objects from the human world to gather near Winding Branch, and the Fairy Queen could be behind it. Follow Lyia's journey through a series of beautifully-illustrated pieces of scenery as she cleans up the mess of objects and investigates the source of the curse.

Wispa Forest doesn't deviate from the hidden object standard, but it does make things interesting within these confines. Each screen has a number of items stashed amongst the greenery and a pictograph list to tell you what to find. You can hover over each icon to get a description of the item, then start combing the area! The visuals in Wispa Forest are nothing short of beautiful, and you won't be put off by staring at them for a few hours as you try to find a spoon and a ladder in a fairy tale world.

The hint system in Wispa Forest is staggered, allowing you as much or as little nudging as you like. Each item you find earns you mana points. Using hints spends these points. You can get a cheap, vague hint, a more expensive and accurate hint, or two specific hints at once. You can also spend mana points to help you out in the match-3 mini-game that appears every few levels. 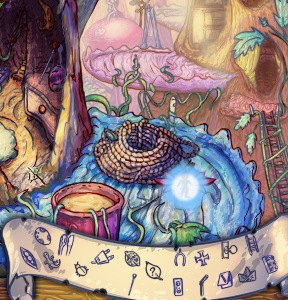 Analysis: A nice change of pace from the dark palettes and haunted mansions that so populate the hidden object genre, Wispa Forest will win a lot of fans simply because it's gorgeous to look at. The gameplay is straightforward with very little standing between you and looking for items, but that kind of stark charm is sometimes exactly what you want from a casual game.

It isn't possible to lavish enough praise on the artwork in this game. Watercolor fantasy world? Yes, please! The nature of the style even contributes to the game's difficulty, making it more difficult to find some objects because of fuzzy borders or mild shading differences. Nothing too difficult, and besides, it's a treat to scan these pictures, so scrutinizing them closer isn't a bad thing. Some of the sound effects are way too repetitive, which is a shame, because they did a decent job setting the fairy forest mood.

If Wispa Forest has any serious drawbacks, it's that there really isn't a lot going on that's out of the ordinary. It's a beautiful game, to be sure, and it makes a strong hidden object game. But if finding well-hidden items from a list isn't your thing, there's no real point of entry for this title for you.

Perhaps one of the best things about Wispa Forest is that it's very accessible for children. Us adult folk will have a great time with it, but because of the visual nature of this game, it's one of the few casual games even young kids will develop an active interest in. Don't be afraid to bring the family in for this one!