Why Am I Dead?: Rebirth

A murder has happened. Yours. And with the storm, it could be days till the road is cleared enough to let the police in to investigate. So you're sure these fine people won't mind if your restless spirit possesses them for a little detective work... Sound familiar? It might be if you played the original Why Am I Dead? But with the sequel to the popular mystery adventure coming soon, Peltast Games has revisited where it all began, remaking it from the ground up to better coincide with the upcoming game's art style and plot. Why Am I Dead?: Rebirth features new sprites, new dialogue, new endings, and even a new character (...technically) to possess. Move your spirit with the WASD or [arrow keys], possessing the different characters at the hotel with [X] or [Spacebar]. When inhabiting a person, you can use [J] or [Z] to talk to others or interact with your surroundings. Characters will react differently to different guests talking to them, and discovering all of what happened will require quite the bit of body-hopping. 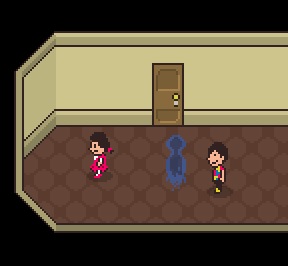 The two questions that every remake has to answer are whether it's worth it for new players, and worth it for those who've played the original. Why Am I Dead?: Rebirth scores well on both counts, with an improved control scheme, refinements to the plot, and gobs of new content. Obviously, you'll probably enjoy playing it more if you don't already know whodunnit, but even mystery books you've already read are hard to put down. A few technical glitches, like text flashing, remain from the original, sadly, and my reaction to characters now walking around the hotel without your input is mixed: it's less realistic to have people always staying where your ghost left them, I suppose, but tracking them down can be a bit annoying. Still, Why Am I Dead?: Rebirth retains it's intriguing atmosphere, memorably characters, and twisty plot, and that makes me excited to see more. Play it, and, if you like it, go give some support at the sequel's Greenlight page.

Play Why Am I Dead?: Rebirth

So far I have only discovered one of the new endings. The author states that there are four. I assume the last two have something to do with Morgan and Randy teaming up, as another player has stated on Newgrounds. If anyone knows how to trigger that, please post it as soon as possible! I'll leave some tips as to how to get the ending I found, since there isn't a complete walkthrough yet.

After discovering everyone's alibis as Cricket, possess Morgan and ask Cricket why he's there. He'll tell Morgan that he was going to meet someone. Now possess Lucille and ask Morgan about the owner for her to learn about Cricket. Talk to Randy about the owner and ask if he was going to meet someone. She'll put two and two together and realize they were meeting each other and that they are likely partners.

Now go talk to Cricket about his "investigation" and learn where he got the alibis of all the guests. Then confront Ted with this information and learn that he got all of those observations from Orval. Ask Orval about Ted and when he denies knowing him, click the one about best friends to learn that Ted asked him to research for him.

Lucille concludes that Ted gave the surviving partner information about everyone and decides that she needs to be ready should things go south. Go to her room and open the briefcase in the drawers (the prompt persists even after you open the briefcase, but it still registers as having been done no matter what). Proceed down the path of the original ending to see what changed.

Well I found ONE of the team-up endings. Presumably the other is what happens when you do it correctly.

Possess the old lady, get Morgan to confess about her investigation of the manager. Talk to Randy about how you got Morgan to talk about it.

Possess Morgan, talk to Randy and team up.

Check the unbroken mirror in the manager's room. Entering it now will result in one of the new endings.

Hey kgy121, I think I found the final ending and since it took your help for me to find it, I figured I needed to create an account and fill you in. So here goes.(please tell me if i do this wrong, I usually mess up spoiler tags


HUGE Spoilers btw.
So in the ending where Morgan and Randy team up, they are thwarted because they don't have a key. In the ending where you play as Lucille,a key is contained in her briefcase. So you need to make their team up a trio by making them friendly with Lucille. This requires the "extra" character mentioned in the comments.
Iblis' doll Sarah. Posses the doll and talk to Iblis. Then posses Iblis and talk to Lucille. Finally, possess Lucille and talk to Morgan.

I still need to find out what the ending actually is but i wanted to tell you ASAP. Thanks and Good Luck!

To talk to people with Sarah, you have to walk the person RIGHT up to the doll, then switch possessions.

Oh no, I'm stuck! You can't go through doors when you're not possessing someone, and everyone is behind a door! This seems like a pretty big flaw..

I know it sounds stupid, but I can't trigger any of the endings except the one mentioned by kgy121 :L I tried following the advice posted here but it doesn't work for me. What am I doing wrong?

I got hit with a nasty bug after teaming up Morgan and Randy:

I paired them up, then dispossessed Morgan and possessed Lucille, grabbed the key, saved, then quit. When I continued, Randy was still following Morgan, but Morgan will no longer investigate anything in the owner's room, including the mirror; she just gives the standard "Looking good!" response.

BrittaBot, I found that I could go through doors as a ghost by pressing Z.

Alternatively, possess someone, walk through the door, and then switch to the other person you want to possess.

I remember playing through the whole game and finding cricket's ending, but when I replayed it, i forgot how to get it :|

Here's what I remember:

I've forgotten a few steps here and there, but I hope this will get you guys one step closer to the ending.

Yeah, I got two endings but seem to have found a bug where I can't possess Randy and he blocks the door of the starting room so Cricket can't leave.

I did what you said but the only response I get out of Lucille (as Iblis) is the whole virgin conversation.

What am I doing wrong?

I also got this bug, but for me it occurred

, ending up in the same position as you. It appears that the bug happens if you save and quit after pairing Morgan and Randy up.

seriously can someone help me?
I've got Morgan and Randy together but I don't know how to get Lucille with them. Am I missing something?

I've finished with all endings but did anybody else find it weird with Ted and Orval not getting a bigger role? I mean the game was clearly hinting something when the little girl knows that Ted was hiding something, anybody think he was the serial killer Lucille was looking for? So suspicious.

first you need to travel through Lucille's end until you get the briefcase (so Lucille can show Morgan her badge), then you need to pair up Morgan and Randy.

I believe that is all you need to do before you

possess the doll and talk to Iblis.

Sarah needs to tell Iblis that she knows what her mother is up to and that Morgan needs help. Iblis will tell Sarah that Lucille is the most trustworthy adult in the hotel who can help her mom.

Then when Iblis talks to Lucille, there should be a second option to tell Lucille what Morgan wants to do.

I found a bug! I saved right after I followed kgy's walkthrough, but Lucille's conversations are reset, like she never had them. So basically, saving did nothing
I also found that I have to actually refresh the page to play again cause when i start a new game, the bald guy won't let me pass!

anyway, now my problem seems to be that the game isn't remembering the conversations, so its not unlocking options if that makes sense.
Like, Morgan has found out that Cricket is going to meet someone 3 times, but when Lucille asks Morgan insists that she doesn't know anything.

How many endings are there? just the original and the three new ones, right?