Elena Elkhorn's father is missing, and she knows it's got something to do with the strange, isolated mansion he was working at as a groundskeeper. She's been having strange dreams about him trapped inside, and unable to bear it any longer, she grabs the amulet he gave her and sets out to investigate herself. What she never expected was to find the tormented spirits haunting the grounds, or that her heritage was so... otherworldly. In Night Light Interactive's indie horror adventure Whispering Willows, also available for iOS and Android as well as Playstation 4, the XBOX One, and the Wii U, Elena discovers her ancestral amulet glows in the presence of spirits, and can be used to enhance her shamanic powers and leave her body. Scary? Sure, but she's going to need all the help she can get to find her father, especially since she's trapped on the mansion's grounds herself, and she'll need to uncover its unhappy history in the process. Use [WASD] or the [arrow] keys to move around, the [spacebar] to interact, and [E] to open or close your inventory. Pressing [Q] will allow Elena to exit her body, which means she can converse with spirits, slip through cracks (no, she can't just pass through whatever she wants), and possess and manipulate glowing objects. She can't venture too far from her body, however, and in her physical form Elena is vulnerable to certain dangers. Though short and potentially too easy for some, Whispering Willows is still a gorgeous piece of spooky storytelling to see you through an evening. 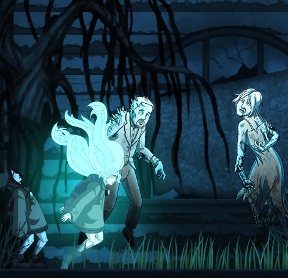 The biggest problem with Whispering Willows is that it moves so painfully slowly... or at least, Elena does, and since you're forced to backtrack over and over across the large estate, your patience can get tried in a hurry. It's also not really that challenging. Since the game is focused on its story, most of your time is spent wandering around flipping switches and bringing the proper items to characters. Elena's astral projection is a great concept, and the limitations imposed on it means you still have to think to get around obstacles, but some players may find the gameplay too simplistic to hold much challenge or variety. Where the game excels is in its gorgeous presentation and somber atmosphere, striking and spooky without being particularly scary or shocking, so just about anyone can enjoy it. The story goes about as you'd expect, but is revealed in bits and pieces as you go through diary entries and the words of the spirits you encounter, and it's great to see a heroine who really does look like your average teenage girl, especially a Native American one. Whispering Willows is an easy recommendation for anyone looking for an atmospheric creepy tale with beautiful art and sound. While you may wish the gameplay had a bit more meat on its bones (which is weird when talking about a game with so many dead people), it's a casual creepy adventure with a great story and setting.