It's a sweltering day outside. Seeing all the thirsty people gives Mickey an idea: lemonade stand! He's missing one key ingredient, however: water. Too bad it's not as simple as marching over to the sink and turning on the tap. From the creators of Where's My Water? and Where's My Perry?, the new physics-puzzle adventure Where's My Mickey? follows the same touch and drag formula as its predecessors, only with a new visual style and some few imaginative gameplay additions. 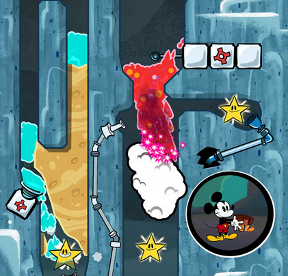 Each level in Where's My Mickey? presents you with a maze of pipes, drains and soil. Much of the dirt can be removed by swiping your finger to draw paths. Make trails to funnel the water to the appropriate drains, collecting stars and turning switches along the way. New to the franchise are sponge-like clouds that store and release water. Use gusts of wind to move these clouds around so you can make it rain right where you need it.

Where's My Mickey? is a real animated adventure. Disney characters make cameo appearances left and right, and there's a host of animated cutscenes to keep things rolling right along. The art style is much more old school Disney rather than prim and polished modern Disney, which was a fantastic choice for Mickey's latest outing. There are over 100 levels to complete, along with some scattered bonus items to uncover that unlock bonus puzzles. It's hard to say no to more dirt-digging water collection. Where's My Mickey? takes the familiar formula and adds just the right amount of newness, making it a creative and challenging puzzle game you'll be happy to play for hours on end!

Level 3: Down the Drain

Level 4: To the Cloud

Level 5: Switch it On

Level 13: It's Clouded in Here

Level 20: Hold it Right There

Level 6: A Change in the Wind

Level 8: Roof Over Your Head

Level 9: One for One

Level 13: Through Thicket and Thin

Level 15: We all make Sacrifices

Episode 4: It's A Big World After All

Level 4: Under the Mountain

Don't these people already have enough of my money? :(

I think you just came up with the next game title: Where's My Money? At least the series isn't riddled with in-app purchases and other traps.

Level 3: Down the Drain

Level 4: To the Cloud

Level 5: Switch it On

Level 13: It's Clouded in Here

Level 20: Hold it Right There

Level 6: A Change in the Wind

Level 8: Roof Over Your Head

Level 9: One for One

Level 13: Through Thicket and Thin

Level 15: We all make Sacrifices

Episode 4: It's A Big World After All

Level 4: Under the Mountain