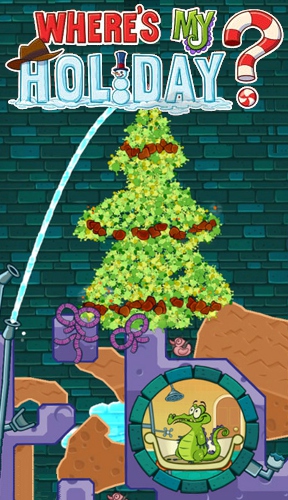 Swampy still needs a bath, and Perry is still trying to solve a mystery. Who has time for celebrations? These guys do, apparently, as they've managed to squeeze in a little Christmas cheer in Where's My Holiday?, a free release from Disney Mobile that turns the Where's My Water? and Where's My Perry? games into something special for the holidays.

Where's My Holiday? follows the same set-up as the other two games in the series. Each level is filled with dirt, water, and obstacles like lasers, ice, moss and pipes. By drawing lines through the dirt you can clear out pathways and deliver water to Swampy or Perry, filling up bonus rubber duckies/gnomes along the way. There are only a dozen levels in Where's My Holiday?, six for Perry and six for Swampy, and the game reminds you on several occasions that you can purchase full versions of the other releases for more puzzles. It's hard to argue with the price of free, though, and even a small taste of the water-moving puzzles is worth the few seconds it takes to download!

Level 1-5: Under the Mistletoe

Level 1-3: Gnome for the Holidays

Complete levels with both Perry and Swampy.

Complete all of the Swampy levels.

Have Yourself a Perry Little Holiday

Complete all of the Perry levels.

Check out all of the stockings above the fireplace in the menu.

Tri-duck all the Swampy levels.

Tri-gnome all the Perry levels.

Level 1-5: Under the Mistletoe

Level 1-3: Gnome for the Holidays

Complete levels with both Perry and Swampy.

Complete all of the Swampy levels.

Have Yourself a Perry Little Holiday

Complete all of the Perry levels.

Check out all of the stockings above the fireplace in the menu.

Tri-duck all the Swampy levels.

Tri-gnome all the Perry levels.

Short and so many ads that I think there was an ad in between each level.

6,286 Views
13 Comments
chrpa— It's Wednesday, it's escape time! Amajeto locked you in their room and wants you to escape, and TomoLaSiDo as well. Puzzles aren't hard so it doesn't take long to leave to enjoy the lovely weather outside. In Spiceapp's escape you...  ...

6,569 Views
14 Comments
chrpa— Hello - the new WE is here! Wishing you beautiful spring and happy playing during this quarantine time! Amajeto is definitely back and has changed remarkably, the latest game is bigger and feels more like their older escapes. Very nice....  ...