Where I Go At Night 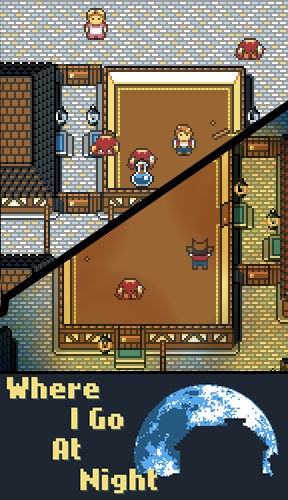 At night, it isn't me. It's like there's someone else controlling me. Making me do horrible things. I try to fight it. During the day I set up barricades. Yet when I regain control in the morning, they've been smashed away... and I see corpses... Before werewolves became sexy shirtless jailbait on the big screen, they used to be, y'know, scary. And what made them so scary was that there was a person inside who was helpless to keep himself from murdering people. It draws on that deep fear we all have within us about losing control and doing something we'd never do in our right minds. The fear of splitting into two people, and even worse, the fear that the murderer is the real you. Where I Go At Night by Pat Kemp explores this split by making it the focus of a local, 2-player versus game. It also reveals a surprising amount of strategy behind its 8-bit retro surface. Grab a friend, or another personality, to try it.

One player controls using [WASD] to move and [Q] to act, and the other player uses the [arrow] keys and [space]. You'll play one round with one of you as the man-form and the other as the wolf-form, with a round lasting three days and nights; then you'll switch roles for a second round. The man-form gains 3 points for every elixir found, and the wolf-form gains 1 point for every person eaten. The man-form can drop barriers (up to 10 per day) with his action button. The wolf-form can use his action button to tear down barriers, whether those dropped by the man-form, or doors in the town. After two rounds, the player with the most points wins. (It's not mentioned in the instructions, by the way, but during the flashing back and forth at twilight and dawn, both players can try to move the character, and you can both pick up elixirs and kill people.) 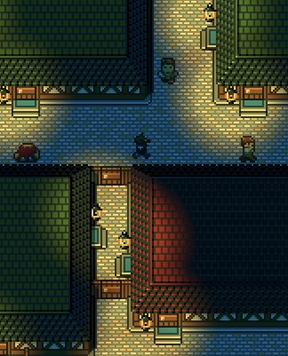 Analysis: At first Where I Go At Night seems hopelessly unbalanced. When I played with my husband, I started as the human form, and I wanted to quit after the first day and night. "This is so unfair! You can do so much more than I can!" But actually that's kind of the point. The wolf form is stronger and faster than his human form. All the human can really do is think long term in the placement of the barricades and try to slow down the slaughter. To stop it entirely is impossible. The wolf-player is almost guaranteed to earn more points than the man-player. That's why roles switch at the end of the round. To beat your local versus opponent, you want to be better at both roles.

Although the townsfolk run, they don't show a lot of sense in how they run, and sometimes will run straight into the wolf. And after the first night of bloodshed, you'd think they wouldn't walk so nonchalantly past the bloodied remains of their neighbors. But even with my suspension of disbelief hanging by a cable, I'm still struck by the low key brilliance of representing the classic werewolf "it's like I'm being controlled by someone else" dilemma by literally having two people control the character, and having them in conflict.

Even by the end of just one game, we started to realize the addictive potential for strategizing and impromptu decision-making in this game. The randomized layouts always add the potential for a sudden monkey wrench in the works, such as when I carefully laid down my barricades just before sundown and went to go hide in a house to find it filled to the gills with people innocently milling about. Chomp chomp chomp. Local 2-player versus mode is always a bit awkward, and the [WASD] [Q] player is at somewhat of a disadvantage, as I found it much easier to pound away at the spacebar. But these flaws don't detract from the overall fun. Plus, you know, being forced into such close proximity means that when you're tempted to rage-quit you can just reach over a few inches and flick your opponent in the forehead. Just claim "Sorry, that wasn't me... it was like someone else made me do it..."

Play Where I Go At Night

Where I Go At Night Walkthrough now available!

Where I Go At Night Tips and Tricks

Where I Go At Night Tips and Tricks

So if you're a human, you can just enter a house once it's close to midnight and lock yourself in? What's the point of being a wolf if I can't even leave the house?

I wish I had time to play it right away... I really liked your review, Joye! Sticking this on my favorites so I remember to try later. :)

@Pepper: I hate to be snarky... well, I'm not going to lie, I like to be snarky, but I'm honestly not trying to be so right now: have you actually played the game? The wolf can tear down barricades, it just takes him time. Including doors.