"Hey, Frank, what's that there on camera four?" "You're so paranoid, Bob. It's just a walking box." "Oh, all right, then. Go back to your Solitaire." Seriously, the security guys in What Box? are the worst. You can scuttle around quite safely in your cardboard hideout and they are none the wiser. Which is just as well, because you don't really need company while you're trying to escape. Who you are and where you happen to be is not particularly relevant; the important thing is to look for the exit and scurry on through it, using the [arrow] or [WASD] keys. 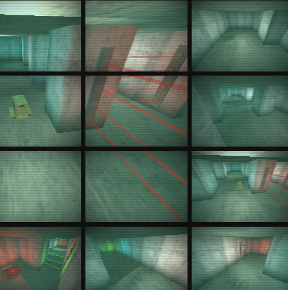 This being a puzzle game, simply waltzing to the door is not an option. Instead, you are somehow able to see yourself through the various security cameras, so you'll never have a clear view of the room you're in. Sometimes you'll go off one screen and emerge in another, showing a completely opposite angle, and it can take a while to find your bearings. The grey, nondescript walls don't help much, either, and by level three you'll be desperate for a decent interior decorator. The only colourful elements are the lasers and hidden buttons you'll have to find to turn them off. All this works great to create the right atmosphere and reminds you of so many classical sneaky sequences in action games. The concept is fun, simple and quirky, and it's a real pity that What Box? is very very short, so here's hoping for a future version with a load of new levels. In the meantime, I'll go and try to beat the game again, this time without traipsing around like a headless chicken.

I think there was a level like this in Psychonauts.

It'd be nice if the arrows made the box move in the same direction on every single screen.

After playing I was left with the impression that there are more creative ways to use the cameras that weren't explored.

I think the controls are meant to be a bit awkward. You're a hapless minion crawling around a high-security facility in a cardboard box. If it weren't awkward, it wouldn't be realistic, or quite as funny.

It ended just when I starting to see the cleverness of the concept.

The early levels weren't much fun, what with the obvious paths and the game stopping to change the 'main' view when you wander too far in one direction.

The last level was where it started to shine - to find the red switch you had to watch the cameras carefully to spot when you entered an intersection. It highlighted perfectly the handicap of being stuck in a second person view, and how you could use the multiple simultaneous viewpoints to overcome it.

I would have loved if the camera could be changed manually (I pick which screen gets zoomed in instead of the game doing it for me). As a balance for manual camera selection, maybe go with car-like controls (rotate left and right, forward and back to move) so that switching viewpoints doesn't change the controls.

This game could easily be expanded with moving cameras, cameras that see in different spectrum (eg, infra red and cameras that see normal light) more varied terrain (locating position based off landmarks, sometimes similar) and other ideas.

This one is a brilliant idea that hasn't been fully explored.

Definitely a cool idea, but it only hits its stride on the very last level. Another way it could be expanded: There are guards who will watch whichever camera is in the main screen, so you have to stop moving whenever it swings around to see you.

Is there a reason unity games are being tagged with linux now? As far as I am aware, the unity web player still doesn't work on linux, though the unity engine itself does (as do several other things called "unity" - it's a popular name for software projects).

'Twas a mistake and it's fixed now, thanks for the heads up!

What a great looking concept for a game. I enjoyed the look and the feel for the game, and I liked the design for the two last levels.

However - I think there is a level-flaw in the second to last game.

You don't need to press any switches at all to get out the door. You can just walk behind the wall after pressing the first switch. I don't know if this was on purpose, but it seems as if you were supposed to have to go back to press all three switches to go through the level.

Apart from this, I loved the game and would love to see it developed into a whole game.

I tried loading this game in both Firefox and Chrome, but there is no picture. I see black squares where there should be the security cameras, and I get music, and when I press the arrow buttons I seem to hear corresponding noises like I'm moving, but there's no video.

Am I missing something or is this an issue between Unity and my computer/browsers? (I am using an old XP laptop.) If it's a tech support question I'll have to figure that out on my own. Thanks!