A lot of games featured on JIG are intensive. They require Flash 10, or Unity or some sort of graphics card capable of displaying something more than monochrome. However, sometimes gamers just don'thave the latest hardware requirements to play the latest whiz-bang flavour of the month. So without further ado, here are a selection of games developed for the trusty old DOS system. You can play them on Mac, Windows and Linux using the handy DOSBox emulator, which is free. You'll need to type a few things into a command prompt, but don't be scared, it's laughably simple to do, and a quick tutorial covers just about everything.

Jetpack (DOS, 500kb, free) - In the included 100 levels, our trusty man-with-a-jetpack will encounter traps, spinning blades, spheres of doom, and something to make it all worth while — treasure. Jump, soar and dodge your way through the all of the levels, then create your own in the included level editor.

God of Thunder (DOS, 1MB, free) - One of the most classic of RPG's (in my mind) tells the story of Thor, the thunder god, and his quest over three epic stories to finally face his brother Loki. Along the way the quest will bring him in strife with snakes, witch hags, television repairmen and frequently haggling apple salesmen.

UrthWurm (DOS, 19kb, free) - The classic side-scrolling 'helicopter game' except this time in downloadable DOS based mode. Hold [space] to rise and release it to drop, correctly timing the undulations of your pixel-copter in order to traverse the dangerous cave system ahead of you. (Note: You'll need to scroll down a bit for the download link.)

Revenge of Froggie (DOS, 450kb, free) - Hardly anything can beat the pure, simple fun of getting a frog across a higway and lake without getting squashed or drowned. Well, a lot of things can, but work with me here. This version of the arcade classic Frogger features two modes of play, including "extended" — ooh, extendy. 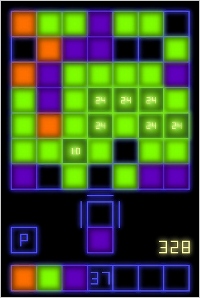 Primrose (Mac/Windows/Linux, 1MB, free) - Oh, it's a game that doesn't require DOS! Jason Rohrer's Primrose game was featured on last week's Mobile Monday, but did you know there's a free version as well? Two colored, connected squares appear at the bottom of the screen. Tap the grid above to place the first square, then tap any open space in the same column or row to place the second square. The goal is to surround one color with squares of another color. The idea is simple, but like any good puzzle game, mastering its intricacies are an entirely different matter. Grab it for your OS and see why its tile placing is one of the heaviest mental challenges you'll ever get from a puzzle game.

Can't run jetpack on Vista. RRRR! Why didn't I pay the extra $50 for the XP "downgrade"?

Ahh...God of Thunder. Thank you for taking me on this nostalgic trip! :)

I know I am not always the swiftest computer person, but how do I get God of Thunder to run? I go to the link, open the freeware, but I am just looking at a few files that I have no idea how to deal with. Any assistance is appreciated.

I'm honestly not sure any of these DOS games will run on Vista. Might help to get Dosbox from somewhere.

Agreed... I doubt XP could run them directly either. For those struggling to get the games working, please read the actual "review". It explains what needs to be done.

Jayisgames is more than just a link site...

I downloaded GOT...but the only problem I have is that it cuts off the bottom part of the screen so I can't see inventory....any suggestions?

Are you using dosbox?

If the resolution is the wrong size for your screen and the game is windowed, try this:

To run dos games you have to :

1) Download the appropriate version of Dosbox for your operating system (link provided in the review above).

3) Put a shortcut to the Dosbox executable file (dosbox.exe) onto your desktop.

4) Download the dos game you want to play, then extract the files into a directory (it's usually a good idea to keep dos games on the C:\ drive. I use C:\OldGames\GameName) e.g. C:\OldGames\JetPack

5) Go to the game directory and DRAG the game executable file over the DosBox shortcut on your desktop. This works for most dos games but not all.

I'm running Vista 64-bit and I can run dos games.

I am trying to use the dosbox for Mac and not getting anywhere with the tutorial...
Blah. Help, anyone?

Not sure there's non-linux binaries out there, but dboxfe is a good frontend for DOSBox in Linux. And I'm sure there are others for Mac and Windows. If they're any good, well, I couldn't tell you, but they must exist.