More games to make you scratch your head, this bonus edition of Weekend Download features a few titles that caught my eye in one way or another. I especially enjoyed G2: Geeks Unleashed, not only for its corny references (every one of which I understood!), but for its unique strategy/puzzle gameplay. 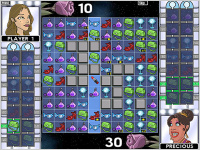 G2: Geeks Unleashed (Windows, 15MB, demo) - Ready for a cheesy puzzle game laden with sci-fi and geek pop culture references? Sure you are! Battle geeky opponents in a puzzle-based collection game where you try and grab item tiles to complete sets and win the match. The catch is that each player takes turns picking items, so depending on where you took your last tile, your opponent may get a better or worse hand. Do you play for your own inventory or set out to deny your opponent his loot? Sometimes the dialogue is a bit over the top and stereotypical, but the gameplay is unique and filled with subtle strategy you learn as you progress. Several gameplay modes add plenty of variety. 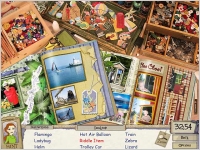 Scrapbook Paige (Windows, 105MB, demo) - A hidden object game that doesn't try to justify the fact that it's a hidden object game! Paige runs a scrapbook store and needs your help finding lists of items amongst the shelves and drawers. Grab a magnifying glass and take a look at countless sets of stickers, buttons, and more craft objects than you thought could be packed into a single screen. It's something a little different for hidden object fans, and scrapbook enthusiasts will appreciate the chance to do their craft even while on the computer. 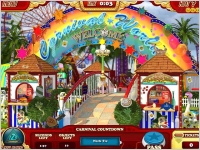 The Hidden Object Show: Season 2 (Mac/Windows, 93MB, demo) - Set in a carnival, this game doesn't try and mask its genre and drops you in the contestant's chair where you compete in various hidden object challenges. Set in a carnival, finding items earns you tickets that can be redeemed for prizes (gigantic stuffed animal, anyone?). The dozen or so minigames are unique and terribly fun, worth the price of admission alone. The biggest draw to this game is its massive length, over 300 rounds in all, three times as many as the original game. That's a lot of pixel scrutinizing.