Remakes, revivals, and retro-styled games are the stars of this edition of Weekend Download. We've got that tasty old-school gameplay philosophy, primitive pixel graphics, and a penchant for minimalism all wrapped into one.

Minima Bomber (Windows, 13MB, free) - A great little platformer with bombs and ability upgrades created by Mike Gnade of Graduate Games. The simple goal is to make it through the game's 16 levels in one piece. Use bombs to destroy bits of the landscape to carve a path through the world. Power-ups give you the ability to do things like wall jump, and enemies stop by to make your life difficult. Minima Bomber was created in a week for the Experimental Gameplay Project, so you may encounter a few glitches (bombs that fly all over the place). I thought the keyboard controls were a little awkward, but it was nothing a little gamepad key remapping couldn't fix. 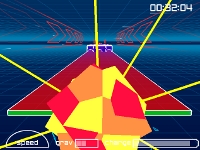 Tasty Static (Mac/Win/Linux, 15.8MB, free) - A remake of the PC oldie Skyroads, Tasty Static is best described by the following text from its homepage: "...a videogame where you go really fast and jump a lot. You'll probably get really annoyed along the way too." So annoyed, in fact, the screenshot you see is of the ship exploding, a sight that will likely occupy as much of your playtime as actual racing will. Use the [arrow] keys to move left and right and increase your speed, [spacebar] to jump, and your computer's [power] button to calm your nerves after the tenth failed jump in a row. Windows users can play around with a level editor, too!

The Thing with 40 Eyes Girl (Windows, 11.2MB, free) - Practically guaranteed to bring a smile to your face, this minimalist rhythm game was created by Ron Carmel for the Experimental Gameplay Project. A highly recognizable song plays in the background (I'll let you discover that on your own) while you mind the moving squares with your cursor. When a gray square appears, wait for the next beat them slide over it. If a square has a hole in it, you have to click it. Easy. The game is highly moddable and anyone with a keyboard and an .ogg file can create their own levels.

Tango Strike (Windows, 12.9MB, free) - A now-classic real-time squad tactics game that puts you in control of three operatives, each with his or her own unique abilities. Think The Lost Vikings but with C4 instead of swords and top-down pixel graphics instead of sidescrolling gameplay. Throughout your missions you'll rescue hostages, disarm bombs, infiltrate enemy territory, blow up doors and fences, and shot a lot of mindless soldiers. Some of the interface choices are less than intuitive, but the game itself requires a lot of patience, practice, and skill.

Small note, since it's a Rhythm Game, I wanted to try out "The Thing With 40 Eyes Girl" The link directed to me with an error because it had "20" instead of "40". I'll be trying it out.

Never mind that, fixed it, but those playing The Thing with 40 Eyes Might want to look into the folder a bit. ;)

Loving Tango Strike, but can only play the tutorial on infinite repeat. Anyone know what's going on?

Minima bomber was fun, I just wish it had laster a little longer. All the upgrades were pretty cool though.

What was that blue orb upgrade for? I got it but the game never explained to me what it did.

The Thing with 40 Eyes Girl was also pretty sweet. Extremely basic, but somehow very awesome. My only problem with it was that sometimes it would switch to a new square the exact second that I needed to move my cursor, so the new square would pop up as red automatically... and at the end, it wasn't registering my clicks right. Other than that, it was great.

I've had a problem with "The Thing with 40 Eyes Girl" that hasn't been posted yet. When I got to open the game, I get a message saying "The application has failed to start because the application configuration is incorrect. Reinstalling the program may fix this problem."
All I do is unzip the file, there is no installation, what am I doing wrong?

Minima Bomber, how am I supposed to ninja up the wall? Holding D and jumping accomplishes nothing. I went back and explored per instructions, but still can't double jump nor land a bomb on the platform with the upgrade a couple screens back.

I can't get sniping to work in Tango Strike. The tutorial said to hold your mouse over the target without moving until you locked on, but he never does. Did I miss something in the tutorial?

@Aegeus, are you using a sniping rifle? I haven't played past the tutorial yet, but it did specify that the sniping mode will only engage if you have the PSG-1 and the other sniper rifle selected.

I only tried Minimia bomber as it seemed the only slightly good game, I was wrong. I know it was designed in a week and glitches can be expected but the mechanics (obviously not a glitch) are awful, the bombs don't roll, they bounce, and sometimes they stick to surfaces. The directional keys are bad - asd? You mean awd.

I Minima Bomber. The bomb physics were too odd for the first part to be enjoyable. I really like how there's somewhat of that "choose your own way to get to the other side" however.

I threw the bomb right next to the vertical pole (where you get the bomb upgrade). The bomb lands there, and then about half a second later the bomb JUMPS backwards to where the 3 crates are. Sometimes the bomb just sits there and erratically jumps around.

The Thing with 40 Eyes Girl has one major flaw. Looking at the bright squares causes your eyes to create a dark afterimage that will partially cover up the next gray square. It is especially bad when the game cycles between two or three squares.

Just a guess, but does the music for the thing with 40 eyes girl happen to be

Never going to give you up?

I can't get past the first mission in Tango Strike. Where is the tool kit?!?

Username: You have to buy it before the mission begins.

JohnB, thanks for the reply. The buying GUI sucks, hit any directional key and the mission starts, ugh. I scrolled through all the guns but never saw the tool kit, and I haven't figured out how to choose a different player to shop for, I'll work on it some more.

Thing with 40 Eyes Girl was good - although I noticed that the "beat" in-game ended up varying from where the actual beat of the music was towards the end. A shame really, could have been tightened a bit better (Love that track on rhythm-games though, works really well with Audiosurf too)

Minima Bomber was... Filled with a LOT of "false difficulty". As in, it was difficult not because the levels were designed to be difficult, but because the mechanics were sloppy. I found it a ridiculous chore to aim bombs correctly (Always throwing at full power + ridiculous bounces, or shooting off randomly when the fuse is about to go, esp if aimed at a corner = INCREDIBLY difficult to aim at anything in particular), and parts where you had to force yourself to walk rather than run were just irritating. Another one that could have done with some tightening up, unfortunately. (Moreso this than the first)

@S_Glasgow: Have you unzipped all the files from the zip, or just the executable? You need to extract everything, or else it doesn't have any of the configuration files it needs available to it.

On XP (and maybe on Vista?) Tango Strike needs to be "Run as" Administrator. If I run Tango Strike as a non-admin user, the tutorial just infinite loops.

I downloaded the zip, I unpackaged it into its own folder, went to open the program and received that message. Don't know what I did wrong. I wish I could be more help, but if I could, then I'd probably have already fixed the problem

The Tasty Static website seems to be down (at least for me). =/

Tango Strike has one horrible problem. Two words: Ammo Starvation. On the third mission, where you have to sweep an entire office building looking for both hostages and secret plans, there are simply not enough bullets in your basic handguns to clear a path to your goals. I did buy the sniping pistol (HK something) for Johnson, but there's a weird glitch where if you switch away from him, his weapon changes back to the Berreta and the HK vanishes, and with it, your sniping ability. It's a charming game with a good mechanic, but it's full of fake difficulty.