Normally, I'm not much of a shmup fan. Three of the four games featured below, however, happen to be shooters. And I happen to have enjoyed them. Which is neat! Sure, they're decidedly less "serious" than most games in the genre, but still, you shoot stuff, so that counts, right?

Little Bee (Mac/Windows, 3.5MB, free) - Little Bee would like to fly to the beehive and collect as much pollen as possible on the way. Using the [arrow] keys to move, simply avoid the obstacles while nabbing bits of pollen from the tops of flowers. Your goal is to collect 50, and if you get hit, you have to start all over again. This cute little game was programmed by Simon Czentnár with music co-creted by Nicklas Nygren (Nifflas) and Kevin MacLeod. 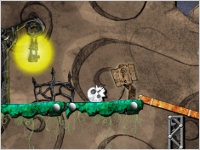 Skull Daddy (Windows, 13.8MB, free) - A preview build of Christopher Mathes' physics-based puzzle game. Similar to Eets in design, you are given a number of tools to put in place while the action is on hold. Once you build a path to the goal, click the skull and it starts rolling, hopefully along the safe and sturdy road you so carefully constructed. Just ten levels are available right now, with only a few materials with which to build, but the game shows a lot of promise!

Attack of the Deadly Mutant Fishies (Windows, 4.1MB, free) - A visually simple boss-based shooting game of a very different sort. Instead of manning a high-powered flight vehicle with guns and missiles ready to destroy enemy ships, you're a mermaid who sings to fish. Take on ten bosses with nothing more than your lilting vocals and a few hit points.

Carpe Universum (Windows, 18MB, free) - A shooter by Wyrdysm Games built around aggressive gameplay as opposed to fleeing from every bullet you see. In addition to half a dozen or so types of weapon attacks, your ship has the ability to roll to the side to dodge attacks as well as charge forward to damage your foes. As if this weren't unique enough, enemies spawn in time with the music, so when the background beat kicks up, you'll have to start paying more attention.

Skulls is just a bad game, even for a demo, for one no tutorial.

AotDMF is really cool. Amazing what people can do with GameMaker!

Press Z to sing, for those who are stuck.

carpe universum looks fun, but it doesn't run right. when I open it it starts up with a tutorial, but moving leaves ghost images of the ship that never fade everywhere, and bullets don't appear anywhere

I have the same problem as tenkuchima

Little Bee was just terrible and frustrating. Also- I got all excited cause I saw that you can download it for your mobile phone and researched how to install it. Turns out you need some ID number which the creator didn't post. Oh well.

In Carpe Universum you can DO A BARREL ROLL!!!

Jillian, thank you for playing Little Bee. You can contact me on my homepage (czentnar.try.hu) if you really want to play it on your mobile phone becuase I don't know yet what the problem was but if you could explain it I could help or find out something.