Got a little bandwidth to spare? We've got a fresh batch of downloadable games to clutter up your hard drive and eat up your precious weekend time. Most of the games have what we like to call a "classic" look or feel that hails from the days when polygons were nothing more than scribbles on your high school math notebook.

Dive (Windows/Mac, freeware, 1-3MB) - Remember the blocky graphics, primitive sounds, and basic gameplay of the old Atari gaming systems? Dive is a not-so-subtle nod to the simpler days of gaming where an arcade-style idea could keep us entertained for hours on end. Control a little diver guy as he makes his way deeper into the ocean, avoiding sharks and trying to keep his oxygen supply full. Believe it or not the game does have a proper ending, and for such a small download it gives its weight worth of fun many times over. 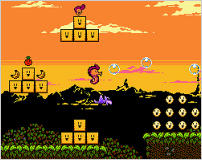 Barbie Seahorse Adventures (Windows/Mac/Linux, freeware, ~5MB) - Don't panic! This game has nothing to do with plastic dolls! Instead, Barbie Seahorse Adventure is a platformer that took one of the top spots in April's PyWeek game design challenge. You play a cute little seahorse trying to get to the moon. Isn't that beyond adorable? The visuals are breathtaking and level design consistently keeps you interested. Just one question: what's up with the purple mohawk?

MSOIDS (Windows, freeware, 2.8MB) - It's Asteroids... but with spazzed-out vector graphics and a hopping chiptune musical score. Aim and fire with the mouse and move around the screen with the [WASD] keys. As an added bonus, tap the [spacebar] to shift the color palette. An online high score table keeps track of who managed to keep their eyes focused the longest. 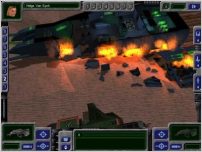 UFO: Alien Invasion (Windows/Mac/Linux, freeware, ~260MB) - It may be a hefty download, but plunking yourself inside this deep war strategy game might be worth it. Similar to the X-COM games, UFO: Alien Invasion lets you control a secret organization charged with defending Earth from a brutal alien attack. Build bases, assemble your teams, and engage in turn-based combat against the wily foes.

Huge X-Com fan here. I was unaware UFO:AI was free. A great big thank you John for this one.

Dive is amazing. I was completely sucked in. Worth playing to the end. Barbie Seahorse Adventures feels like an overlooked NES classic.

MSOIDS is yet another genius work by Cactus, who is, without a doubt, one of my very favorite indy game designers. This game isn't much more than an unusual graphics demonstration, but the simplicity belies the unusual mind it took to create a game that looks that way, and the technical mastery it takes to make it look easy.

Although Alien Invasion is certainly a great game in its own right, it's not really done yet - there are a few key features that are still missing from the game, and it won't feel complete until they are implemented (interceptions would be nice!). Also, quite a few bugs. I would have suggested waiting until 2.2 came out, but there's really no telling how long that will take, because it's being developed completely for free.
Great game though. It will be a gem of remakes when it's finished.

Has anyone else tried downloading Barbie Seahorse for Mac? When I try to run it, almost all the text within the game is gibberish, like little square U's or O's.

Barbie Seahorse worked fine for me. Does everything in the game besides the text work for you?

As far as I can tell, yes. I looked on the forum on their website, and (some) others have complained about the issue but there's no publicized solution.

That's too bad. Luckily, the text isn't very important in this case.

What file do you get for a Windows XP? I want to get alien invasion, but i don't know which files i need. I need help! (I used the sourceforge link.)