A smattering of games have reached your eyes this weekend, begging you to answer just one question: exactly how much is a 'smattering' anyway? Serve yourself up a helping of Sauerbraten if you're in the mood to shoot some baddies, and puzzle fans can delight in not one but two games to send their neurons in a tizzy. Always careful to cater to my adventure gaming brethren, you'll also find a fun little adventure title full of pirates! 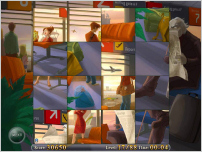 Zoom Book: The Temple of the Sun (Windows, demo, 23 MB) - While it may sound like a racing game where you drive books around a track (how cool would that be?!), Zoom Book is actually an interesting take on the matching subset of puzzle games. You're presented with a scene that pulls itself apart right before your eyes. Click and swap tiles to make the picture whole again, then marvel as the image solidifies and zooms in (or out) to reveal the next connected puzzle. It's an oddly captivating mechanism that does wonders to propel the story and connect each puzzle with the last. Definitely worth a look if you dig casual puzzle games and want something a bit different. 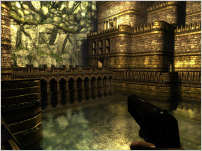 Sauerbraten (Windows, Mac, Linux, freeware, ~190 MB) - Yet another game whose name could be misleading (hint: it's not a Cooking Mama rip-off), Sauerbraten is a free open source first person shooter for all three major platforms. Think classic Quake with a stronger emphasis on mindlessly blasting enemies and you have a good idea what to expect. Sauerbraten has both single and multiplayer modes and comes with a level editor. 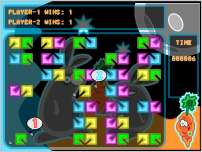 Biniax-2 (Windows, Linux, freeware, ~5 MB) - A deliciously cerebral logic puzzle game by Jordan Tuzsuzov, Biniax-2 takes you exactly three seconds to learn to play, then the rest of your afternoon to figure out how to win. Pairs of colored shapes descend from the top of the screen. You control a lone shape at the bottom of the screen and can eliminate any of the pairs if your piece matches one of the colors. After you destroy a pair, your color changes and you're off to destroy another group. It sounds simple on the surface, but figuring out which pieces to eliminate so you don't trap yourself can be frightfully difficult. 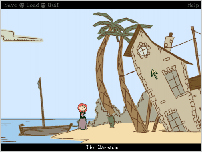 Nelly Cootalot (Windows, freeware, 15 MB) - A pirate-themed adventure game that draws inspiration from the Monkey Island series in more ways than one. You play Nelly, a "fearsome pirate and lover of tiny and adorable creatures" who is charged with investigating the disappearance of a fleet of birds by a dead pirate's ghost. The visuals and dialogue are so much fun, even adventuregameaphobiacs will have a great time.

Sauerbraten looks great, but I'm not much of a fan of blowing up stuff mindlessly, like you said (specially quake, blargh, i'm more of an half-life guy). Any chance I will enjoy it?

Much love for Nelly Cootalot. I was able to solve it without using a walkthrough (yay!) but it wasn't too easy, either. Plus, the jokes are actually funny.

My cat is stuck on the fish... any hints?

Wow, Zoom Book is much more fun than it should be, given the simple concept. It definitely succeeds to create a captivating atmosphere with the artwork, music, children-bookesque narration, and all. And the difficulty seems to be "just right" for story-driven casual game play - not really too challenging, but fun, forgiving and smooth. I enjoyed that 60 minutes.

In Nelly Cootalot, I'm stuck right after I get the disguise, used the fierce caturglar on the dog and I need to get on the rocket, a least I think that's the next step.

Glad to see Nelly Cootalot up here. It's a great game, played it a few months ago. More adventures, please!

...Say, by projecting your voice.

Hit the pipe with a big rock and talk to it.

You need to draw the cat's attention away from the fish

Certain sea-creatures have ways of hiding themselves when confronted with danger.

Throw some squid ink in there.

I did that and now the baroness keeps saying 'I don't take fashion advice from pirates' :P

Not sure whether I need to start over or something.

nevermind, figured it out :)

I'm just not getting something with 'Nellie Cootalot'.

After arriving at The Barnacle, all I've managed to do is have the barman tell me that I can't enter the Rogue's Gallery without making a donation.

Otherwise, I can't talk to the barman, or the fellow at the bar, or attempt to pick up the map on the bar.

And I can't seem to walk past The Barnacle to get to anywhere else...?

Andrew: the game's GUI pops up when you click and hold your left mouse button when you're over something you can interact with (like Monkey Island 3 or Full Throttle, if you ever played those). I went crazy trying to figure that out my first time, too, but turns out it's mentioned on the game's website.

hey, jay-is-games cryptology department! can i have a wee bit of a hint for that stupid

(i dont know if that should be a spoiler, but better safe than yelled at ;) ) decoding stuff has never been my strong suit...

Wow, Nelly Cootalot is absolutely perfect for my tastes. I LOVE video games that play and feel like cartoons, and Nelly is nothing but. And wow, the jokes are just nonstop. I wish there was a way to give that dude some paypal or something - I'm in for $10.

Note on the Nelly Cootalot walkthrough that was posted (since I couldn't quite figure out how to email the author):

In the walkthrough, s/he explains how to decode the pirate's oath, but doesn't seem to understand the why of it. So I thought I would explain: the note that you find ("Quik! Gowd, slva n c b the pryz. -JMF x") is the key. When you look at the message outside the bar, just change around the alphabet until it echoes this message, and you're done. (Of course, it's also entirely possible to solve it as per a normal cryptogram.)