The following message was stolen from artbegotti: This episode of Weekend Download has been brought to you by Triangles. Triangles are three-sided shapes that have three corners with internal angles that add up to 180 degrees. Triangles come in several varieties, including right triangles, equilateral triangles, isosceles triangles, obtuse triangles, and more! Triangles are also well known for their structural stability in architectural design. So go out and try some triangles today! "Triangles... We're Not Square!"

Tile World (Mac/Windows/Linux, ~1MB, free) - Created to emulate the gameplay of the classic Chip's Challenge, Tile World is a simple top-down puzzle game where you collect keys to open doors and gather computer chips to unlock the exit portal. Special boots allow you to walk across water, fire, ice and moving platforms unaffected. Surpisingly deep gameplay and plenty of levels to challenge you make this one a winner.

Red Spheres (Windows, 1.7MB, free) - A simple puzzle game where the goal is to turn all of the black spheres red. Clicking on an orb will toggle itself and adjacent spheres, so work yourself out of the corners and plan your moves carefully. A very elegant and stylish game. 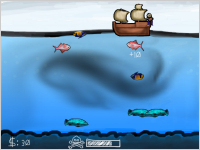 Pirate Fishing (Windows, 4.8MB, free) - An experimental game by Petri Purho (Kloonigames) made in five days. Pirate Fishing is a simple arcade game where you play a pirate trying to catch fish for profit. But why use a pole and hook when you can just dump oil in the water? It's sad, but effective, and the more fish you poison the more cash you rake in. Love the Star Trek background music!

Run for It 2 (Windows, 2.6MB, free) - A vector-based racing game where you control a runner in the foreground who must collect gems while dodging spikes and flying baddies as he traverses the twisty passageways. The quasi-3D style is great, reminds me of arcade games in the days of old. Simple gameplay and a catchy musical score will keep you hooked.

I see plenty of circles and squares in this Weekend Download, but where are the triangles?

I want to download Tile World, but the linked page isn't loading. Should I keep trying or just quit?

Tile World's page isn't working for me either. I LOVED chip's challenge, looking forward to some pseudo-nostalgia!

We've uploaded the Windows version to the JIG server until the Muppetlabs site comes back online:

(The Mac and Linux versions can be found at the site orangeupurple lists in the comment below this one.)

I have used tileworld as an object lesson with my students dealing with planning and patience. I found it at this site: http://members.allegro.cc/ThomasHarte/osx.html some time ago (last year I think). Its one of my favorite games. My students loved it also.

I can't get Pirate Fishing to work. Anyone else having this problem?

It looks like we're in the same boat. I extracted all the files, and it didn't work, and neither did re-installing.

Jay, the Windows version of Tileworld you're hosting seems only to come with the intro level sets. Anyone know where to get more levels?

I can only see the two intro files for Tileworld and none of the others in the folder.

So I followed the link from the readme of Tile World to http://groups.yahoo.com/group/chips_challenge/files/ and it won't let me get in. I'm wrestling with this stupid verification stuff and it doesn't want me to get in.

re Tile World on Linux: if you're using Debian, there's a package called tworld.

All I can find for Tile World are the introductory levels. Are there more? The intro levels just made me want to play...and play...and play. Is there a way to get more levels?

Any level that's playable in Chip's Challenge will work with Tile World. Here's a great list of user-made stages:

You'll need to do a quick and free registration with the Yahoo group to download those files. Took me all of four seconds and I was downloading away.

Level 8 in Tile World has me flummoxed.

I've stopped the fireballs the the brown block but I can't quite figure out how to get to the end block.

I didn't realize the traps don't change when the button was pressed.