This week we have what is perhaps the strangest Weekend Download offering of all time: a sequel to a ten year old game originally packaged with Chex cereal. Yes, it's as odd as it sounds and yes, you have to have some pretty serious nostalgic yearnings to really get into the game. But hey, Chex cereal looks like miniature waffles, so how can that be a bad thing? 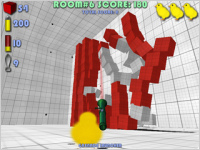 Kumoon (Mac/Windows, 6-9MB, free) - A hybrid third-person shooter and physics-based puzzle game, Kumoon puts you in control of a fuzzy chick with an arsenal of weapons at its disposal and one goal in mind: knock down all of the blocks in the room. Bumping a brick will turn it from red to gray, and you must send them all toppling using as few shots as you can. The game is tightly scored and leaves very little room for luck. Much more challenging than it may seem, you'll spend quite a lot of time fine-tuning your shots on some of these stages.

Archibald's Adventures (Mac/Windows, 8MB, demo) - From Rake in the Grass, the studio behind Larva Mortus, comes a title created in the style of Lost Vikings, though with less of a puzzle slant and a greater emphasis on action. You play the young boy Archie who finds himself trapped in a mad scientist's mansion. Skate your way through over two dozen levels in the demo, and the full version scores you well over 100 stages to complete. There's a great variety of puzzles in the game, both easy and tough, and I found the experience remarkably gratifying from beginning to end.

Mission Extreme (Windows, 2MB, free) - A chunky-pixeled run and gun shooter in the vein of the classic Contra series. A terrorist organization has kidnapped 20 hostages, and as a guy with a gun, its your job to rescue them.Use the [x] key to jump and [z] to shoot, the rest is up to your own mad platforming skills.

Chex Quest 3 (Windows, 7.5MB, free) - Yes, you read that right. Chex, as in the cereal, and Quest, as in... well, as in a first person shooter total conversion of Doom. Oh, and "3" as in the third in a series. The original Chex Quest game came packaged with the cereal back in 1997, and a sequel was eventually released. Now, ten years after the first two games had their epic run, the artist of the original game has polished up another installment in the breakfasty saga. Play it for the nostalgia. You know you want to.

Yaaay! Kumoon is a game I suggested! Albeit months ago ^_^; But no matter, it's still a really great game and I look forward to playing it again (especially since I have my new super faster computer now!)

I do know I want to, and I was beginning to think that CQ3 would never show. Guess I was wrong.

Archibalds Adventure is excellent! I played the 2 demo sections and it was addictive and fun. The visuals remind me a lot of Nitrome.

Kumoon is genius and should get more recognition.

The guy has made a bunch of other great games too.

Yes! Jets'n'Guns GOLD is one of his masterpieces too. I got lucky one day because it was for free at game.giveawayoftheday.com

Has anyone ordered the full version of Archibald's Adventures? I was thinking of doing it, but I balked when I saw that entering my address was necessary. Can't I just download the full game instead of having to wait for it to arrive by mail? This is the 21st century; waiting for things is out of style!

Either I'm getting something wrong about Kumoon or it's a super hard game. Took me about 50 tries just to beat the second level...
The graphics are great though.

Hey, can anyone provide a Kumoon walkthrough?

Kumoon is an interesting idea, but it was kind of ruined for me when I realized

You can just push the grey blocks into the red blocks. It's just too tempting to use that trick to beat every level.

I played the Archibald's Adventures demo, and it was easy and fun. I went & bought it, and the later levels are less puzzle-driven than guide-the-balloon-type figure with EXACT precision and timing. Not so fun. And you have to beat 8 levels in one section to see any of the levels in any further sections- and guiding a drifting balloon-type mechanism around is really HARD. I couldn't even get one level in that section. So if the whole game was like the demo, or maybe got a LITTLE harder, that would be great. But it gets into guide-the-balloon-against -the-fan-don't-hit-the-spiked-wall territory.

Actually, that's the only way that some of the levels can be beaten. It would be impossible to bring down all the boxes in one shot on some of the later levels with them being so spread out.

SonicLover: The full version of Archibald's Adventures is actually what you download when you play the demo. Going through the ordering process gets you an unlock code which you receive immediately via e-mail, then the full version is ready to roll. IIRC you don't have to enter your mailing address if you buy using PayPal, but it's required for credit card purchases.