A few short, experimental-type games this week, including one from prolific Game Maker designer cactus, a two color game where you are a wild boar, and a game where you control a dark sun to capture golden butterfly/angel-type things. And just to make sure you don't go mad with weirdness, there's a nice relaxing mahjong game to tame the inner beasts. 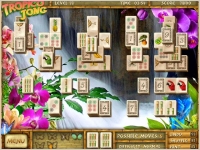 Tropico Jong: Butterfly Expedition (Windows/Mac, 10MB, demo) - A nice looking mahjong game where you take on the role of a hobbyist out to discover butterflies on Tropico Island. The basic mechanics follow the usual mahjong setup where you pick up matching tiles that aren't trapped by other pieces on the board. But because you're searching for butterfly tiles, the mahjong element becomes a means to an end. Over 100 levels to play, 400 butterflies to find, and great user-friendly features that make finding matches as easy or difficult as you like.

BlockOn! (Windows, 1.6MB, free) - An experimental platformer by cactus that involves both building and run-and-jump-type gameplay. Use the mouse to place blocks that form a path to collect all the red objects on the screen. Then, hit the [spacebar] to activate your character and run through the level you just created to make it to the exit. Spikes and enemies appear on the ground you creat to make things a bit more interesting.

INNO-vation 2007 (Windows, 1.1MB, free) - A two color Japanese-made platformer where you control a wild boar that's constantly on the move. Jump across blocks and grab power-ups, avoiding spike traps in the process. A very simple game with a charming Engrish translation, but it still manages to be a fun play.

Phyta (Windows/Linux, 4.5MB free) - Your cursor is a dark sun, and the giant vine at the bottom of the screen always grows towards it. Ensnare the golden angels by growing the vine around them to progress through the game. A very mellow and atmospheric game with as much or as little artistic meaning as you want it to have.

Is Ino-vation supposed to be really small?

question... does anyone yet know how to use items?

First the small screen irritated me and I didn't see the point. Then I got the point, sorta, and started to enjoy myself, kinda, and the game ended.

All in all it's not really a waste of download, but I think if people dig this kind of games they should definitely check the Jumper series or the Untitled Story on http://www.mattmakesgames.com/games.php if they somehow missed Jay's earlier coverage of them.

BlockOn! is fantastic and unbelievably clever (as would be expected - it's from the genius that is cactus); highly recommended.

I just beat INO-vation... and I have no idea how.

BlockOn was way too short...
so was Ino-vation (there is a spelling error: inno-vation instead of ino-vation)...

They are fun games but dont expect to play them for more than 10-15 minutes...

Mahjong isn't one of the games i enjoy and Phyta doesn't look too entertaining...

All right, I played through INO-vation again to try and get all the items. I have to say, I love this kind of game, where you can easily play it without even realizing how many secrets there are.

And there's even a secret code:

At the title screen, press left and right in this order: L L L R R R L R. You can play in "Lunker Mode" with a black boar, who only has one heart, and can apparently die from falling a short distance.

:o I go to Jayisgames to submit Phyta, and I'm greeted by it on in the latest post! Freaky!

Speaking of, I got to the 5th level of Phyta, and I got the sun to be as intricate as possible, but catching more angel-things didn't do anything. Does anyone know what's up? Is that the end of the game?

Block On was fun, but occasionally it would generate levels that were impossible to beat. The trap placement algorithm would be improved by making sure that the spikes always had space to jump over them.

@Meesh: Yeah, that's the end of the game there. Which is kind of disappointing, I really enjoyed Phyta... XD

Oh our language is so funny. I just had to laugh about "you are a wild bore". It's one of those translation problems that is mostly our fault, not that of the translator. I have yet to think up what exactly a person who is wildly boring would be like, but the unintended oxymoron is great.

But where is Ino-vation after you download it? The only .exe I could find in the folder I unzipped was something called "act_test.exe" and it does nothing..

Phyta wont work for me, I click on the fullscreen .exe file, but all it does is pop up a black screen for about 1/2 second, then dissapears, can someone help me?

I can't catch the golden thingy in Phyta after level 2! it just weakens the vines and floats through! is there a trick to catching it?