You awake rather late in the morning, the sun bursting between the blinds it's been banging on for hours. Your head hurts a bit, and your stomach aches ever so slightly. What was that you ate last night, anyway? Veggie lo mein? Groggy, you pull yourself out of bed, flip on the trusty computer and connect to the Internet. Your favorite website immediately opens, and your dreary face brightens as they rest on the sanctuary that is Weekend Download. 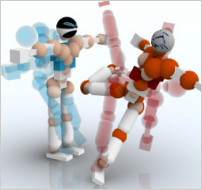 Toribash (Windows/Mac/Linux, 16MB, free) - A slow-paced, turn-based fighting game that lets you sculpt a battle one muscle movement at a time. Choose whether the points on the ragdolls will contract or expand to set up some pretty amazing stunts. It takes practice, but when you get the hang of it, you won't put it down for a very long time. Needless to say, there's a lot of blood and violence in the game, so keep the kids in the other room while you plan out your next uppercut.

In the Woods (Windows, <1MB, free) - A short text adventure with a setting and story that might seem a bit familiar. Or maybe it's just your imagination? Either way, why not grab that basket of food and head out into the woods to deliver it to grandmother's house? Watch for wolves, and don't think there aren't a few surprises to be found in this grim game.

The Sewer Goblet - The Wu-Tang Clan and the Wu-Tang Baby (Windows, 9.5MB, free) - From the same twistedly parodical minds that brought us Barkley Shut Up and Jam: Gaiden, Sewer Goblet is a roguelike RPG that casts you into the depths of a dungeon to rescue the Wu-Tang Baby. Hunt down treasure, defeat enemies and gather equipment to make your journey possible. As with many roguelikes, once you reach the bottom you have to work your way back up before declaring yourself the victor.

The Power (Windows, 4MB, free) - An action platformer that ditches the puzzles in favor of shooting and exploration. Expect loads of weapons, boss fights, items, upgrades, and a neon-lit visual style that, if you ask me, is pretty cool.

I remember suggesting Toribash back in September. Back then, it cost $20, so be glad that it's gone freeware now.

I'm surprised that Toribash hasn't been on here before (it's currently on version 3). At any rate, it's a great game and well worth enduring the learning curve. If you get a bored/frustrated with normal matches, try using the various add-ons or start watching some of the replays, then press P (I think) to take over halfway through. I would also recommend extending the default time length of each match.

KILL GRANDMA! That was the first thing I tried, made me laugh so hard when it worked...

i loved the game,"the power"it's awesome so far!but now im stuck at the part where you have to fight the ninja people and there are like 4 in a row and no saving either.besides that,i loved that game though :D

I couldn't believe Toribash was free when I saw it!

In The Woods doesn't work for me. I really wanted to play it, but everytime I try it, an error shows up (0xc0000135). Any suggestions?

I got the good ending in The Power. Just out of curiosity, what is the bad ending?

The online community of Toribash is excellent. Thanks for finally putting this up. My brother is one of the top 25 rankers, and he has some pretty epic replays saved.

blieber, the bad ending is just the king calling you unworthy if you haven't collected all of "your stuff."

Toribashi always frustrated me in a huge way: I never understood the hype around it and how much people loved it. Frankly I still don't see a reason. I know how to play and played it myself but it never caught me.
But it's me and those who love it are many so I must be wrong, I know :(

So in In The Woods, after I eat the meat... what next? I've tried everything I can think of... and although

killing the grandmother and leaving both end the game, neither seems the right ending.
I've taken the axe, given her the basket, asked her about everything I can think of... and no good :(

gotta try them out.

I'm having the same problem. Is it possible those are the only 2 endings?

I suppose it only has those two endings, but they feel so wrong...

@bioLarzen - the game is really cool and initially very fun, but I've found I need to be in the right mindset to play it. And unless you're really driven to discover and create the motions needed to make cool things happen, I can see it not being a game that stays on one's harddrive for very long.

I could use a hint in how to proceed in The Power - After I got the second suit upgrade, I can't find anyplace new to go.... Any clues?

I pursued Toribash, and it's AWESOME. I'm having a great time playing it, and I'm getting rapidly better. It just takes some getting used to.

However, one of the most interestings things is the ability to mod. I'd love to try it out, but I have no idea how. There's lots of modding tutorials, but all for people who already know what they're doing. I can't seem to find a complete beginners guide anywhere. If anyone has luck with that, please tell me here or email me at [email protected] If you do, I will express my thanks and you will physically gain nothing. How can you pass that up!?

I love text-based adventures and played them to death back in the 80's but I find "In the woods" pretty frustrating. You are basically on rails, never able to do really do anything except the obvious. If you try to look something specific, 95% of the time you will get a description of the area instead. When you try to talk to "people", they seem only to be able to answer four or five things, and that's it. Oh, and "Sorry, I didn't understand that"-syndrome is pretty heavy.

I've found two endings, both of them pretty unsatisfactory. One is that you exit the house, and the other is when you hit the grandma with axe. The second one is kinda badly written, so you really cannot discern from the text whether you killed the wolf, or killed grandma who has dined on the wolf earlier and decided to keep the head. The latter option would be cooler, though.

If there are other endings, I cannot find them. The "grandma" simply does not want to talk about anything, and you don't seem to be able to do anything. Has anybody managed to get further?

baba44713, from looking at the comments on the download page, I have to assume that those are the only two endings, and you're right about the writing on the one. It has potential, but really does not deliver. Oh well.

Hello.
This is VolcanoX.
I am a major fan of toribash.
So glad that it was reviewed.
Too bad my review wasn't good enough.
:
Hope to see you guys on.

About In the Woods:

On the page, the author says that "there are two endings, but the boring ending isn't one of them." Presumably that's the one where

so there's probably one besides

I assume it has something to do with following the traditional story, but I can't figure out how to do that for the life of me.

I think I found both endings for In the Woods.

The first one happens when you

The second happens when you

look under the bed.

Toribash is questionably the best physics game ive ever played.