Our main course this evening is a heaping plate of voxels served on a bed of romaine and topped with bits of rock from an underground jail cell. Following that will be a tiny space ship served in bite-sized pieces that must be consumed within three seconds.To wash that down feel free to eat as many bugs as you see fit.

Voxelstein 3D (Windows, 30MB, free) - A remake loosely based on the classic first person shooter, Wolfenstein 3D, using Ken Silverman's Voxlap engine. For the uninitiated, Voxlap is build around voxels, pixels living in a 3D world that function as building blocks in much the same way as polygons. Voxelstein 3D is just one short level but serves as an excellent showpiece for the engine. Having an almost fully destructible environment makes for a very fun time!

Made in Wired (Windows, 1MB, free) - Similar to the Four Second series of games (or Wario Ware, if that's your cup of tea), Made in Wired features a series of lightning-fast minigames centered around a shmup theme. You only have a few seconds to understand and complete each game before you're thrown into the next, so you might want to take a deep breath before firing up this game. 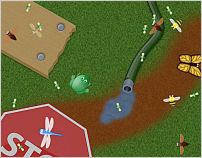 Bullfrog (Mac, 8.3MB, free) - Bugs. Never liked 'em. Frogs seem to love them, however, which is a bonus in this game. The six legged critters have invaded your home, and as a mighty bullfrog you must devour as many as you can. It's a cute, simple, relatively easy and kid-safe arcade game.

Only three games?! I'm a BIT disgusted. I always seen about 5 games in WD. I hope it would not change.

Q. Is there a cheat code?
A. Yes. But you will never figure it out.

Made In Wired has a Mac port, along with some ports of other shmups by the same people/in the same style.

Q. Is there a cheat code?
A. Yes. But you will never figure it out.

well it IS a joke, you can use the wolfenstein cheat... search around more before accusing ppl pl0x

The cheat will restore health, give the player all weapons and ludicrous amounts of ammo.

please, don't forget that the JIG staff is not there to serve us, so please, try not to feel "disgusted" just because you didn't get 5 games this time.

By changing the values in the config file, you can transform the knife into a chainsaw-like cutting tool. Used in conjunction with the unlimited C4 you get with the cheat code, you can blaze a trail of destruction through anything that stands in your way. Muuhahahahahaha!

Also, anyone know the significance of the numbers on the safe?

You can also get the chain gun legitimately, at the beginning of the game.

jump over the boxes (or hack thru them with the knife) in the room behind the first door to the left after you exit the first room, theres a pic of bush next to the door.

anyone figured out the safe code yet?

behind the light gray wall in the entrance hallway to the room with pictures of the pope. Use the explosives to blow open the wall

there is a room dedicated to ken behind the door with a chain across it next to the safe room, once again, blow up the door.

Made in Wired is excellent amounts of fun. I've been playing that one for a while and got up to around level 30 in mode 2.

Anyway, great site!
But question -- what is the best way to find all of the
Windows downloads featured throughout the archives? I'm
trying to build a library of free game/demo installers.

Check the tags for Windows. You'll have to go through the WeekendDownloads by hand, though.

It was so obvious once I found it out!
There are several treasures in there.

You say "If that's your cup of tea" as if the five second series wasn't a blatant rip off of Wario Ware.

I agree with Exoduster. I'm not sure why you even bothered to mention the Four Second games- they're absolutely terrible and derivative.

It's also worth noting that "Made in Wired" is a direct reference to the original Japanese title for Wario Ware, "Made in Wario".