Hangovers, guns, and retro roguelike games. Sounds like a typical Saturday night in the 80s. This weekend, however, we're celebrating the good ole days casual gaming style, which results in less money spent, fewer blackouts, and absolutely no inexplicable bruises. 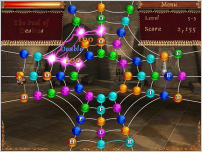 Rainbow Web II (Windows/Mac, 24MB, demo) - A colorful and uniquely varied puzzle game that does a great job making you forget what genre you're supposed to be experiencing. Not only do you have to line up colored orbs (which can only be swapped with other orbs connected via web), you also have to spell words, find hidden objects, and complete a sliding puzzle or two. It's an extremely varied game, especially for a match three puzzle title, all set in a beautiful fantasy world with a gorgeous storybook presentation. 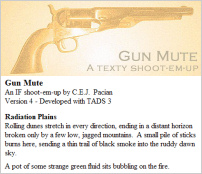 Gun Mute (Windows/Mac/Linux, <1MB, free) - Set in a futuristic wild west, Gun Mute is a great piece of interactive fiction that strips away a few of the genres conventions without sacrificing story or gameplay. You can only move forwards or backwards, and you don't have to worry about gathering tons of items and using them in odd ways. But puzzles are still there, they're still tricky, and you'll do a lot of shooting, which is... unusual for a text adventure.

The Hangover (Windows, 1.3MB, free) - Inspired by games such as Passage, The Hangover takes you through each stage of recovering from, shall we say, overindulgence in certain grain-based beverages. Perhaps not as deep or meaningful as, say, The Marriage, but is an interesting experiment nonetheless. Comes with a seizure warning for a very good reason.

Powder (Windows/Mac/Linux, ~1MB, free) - A tiny, graphical roguelike that would feel right at home on the Game Boy Color. Descend into the depths of the dungeon, fighting monsters and gathering loot, until you reach the foul daemon known as Baezl'bub. Slay the beast in heroic combat, then ascend twenty five levels to the surface with his black heart.

I've said it before and I'll say it again: The Hangover is not a game.

In other words, don't try this at home?

When reviewing demos, could you mention how the demo is limited? I don't bother with time-limited games (I think that includes everything from Big Fish), but content-limited demos (like Puzzle Quest) are great.

Ow, my ears. Ow, my eyes! Where did you find something like The Hangover? That was really painful, but I guess that was the point.

I wish my hangovers were as exciting as that. The ability to spin 360 degrees in the air and no headache? Sign me up.

Sweet! I'd always ignored the WDs because I figured none of the games would run under Linux. And extra sweet, because I love IF :)

(I keep meaning to go back through the archives and see if any of the more interesting games will run properly under Wine.. but honestly, it's often not worth the hassle.)

I would strongly recommend that people play Gun Mute, especially if you don't usually play IF games. It's great fun and the puzzles make you think, but none require any of the ridiculous leaps of logic often found in IF, such as combining the crab with the broom. Also, it launches as an executable, so you don't need to get any other software for it.

I want to play a game where you combine a crab with a broom. Does it exist, or are you a big tease?

I am especially enjoying Powder. It seems a bit less punishing than Nethack, and the graphics are adorable.

I have a few questions!

1. Where would be the prefered place to post an 'This is now officially my fave gamehead site'comment

2. Could there be a genre slot for the increasing prevelant 'brain training' type of game? I dont see it as fitting into puzzles or arcade comfortably

3. Am I a loony or does this background look like a closeup of a green jumper/dishcloth?

4. Im putting a brew on who wants a cuppa?

Gun Mute was surprisingly unique and refreshing. Thanks for posting it. Here, I even made a walkthrough for you guys (which shouldn't be necessary, really, since it's a rather short game - but anyways, maybe you're like me and didn't get the perfect score on your first try).

Note: a lot of the looking around and examining things in the walkthrough below is optional, or merely to pass time (used instead of typing "wait"). And yes, in most fights timing IS essential. When in doubt, always seek cover and try to observe your opponents attack pattern. Also, many enemies cannot be shot at directly - examine your surroundings thoroughly to find things to shoot instead.

Under the Gallows:
look at elias
kiss elias

Rowdy Juanita's Saloon:
look at rowdy juanita
drink wasteland wine
nod OR shake head
*** THE END ***
Congrats, you should now have all (20/20) points!

There's also a slight exploitable bug:
When using "give gun to ..." at your first encounter (with Sue and Hank), you draw your gun without anyone noticing it. If you then continue to shoot the two, they will continue talking (but still register as dead).

Typing 'xyzzy' in Gun Mute is pretty funny. Just don't do it unless you want to die.

For anyone interested, Rainbow Web 2 is also available for Mac OSX from SugarGames.com.

I submitted Powder. I've been totally addicted to it since I found it a few weeks ago. It has incredibly rich and balanced gameplay, having been developed over 5 years and over 100 releases. It has a much smoother sense of progression than nethack, I find. Indeed, as Snowy put it, it's much less punishing. There will still be times where you'll get teleported into a room of enemies too powerful for you, or fall into a pit of spikes and die, but precautions seem generally more effective, and the learning curve is more comfortable.

Is anyone else having trouble getting The Hangover to run at all? I'm using Vista, and double-clicking on the executable produces no visible results. (I suppose I should try compatibility settings or something.)

Vorpal:
In Gun Mute, I got my final, 20th point by

shaking my head, even though the game didn't seem to specifically alert me to it when I got the point. According to my full score list, the point was awarded "for forgiveness", and failing to shake my head would only result in a final score of 19/20, with the point for forgiveness being left off my list.
I didn't follow the walkthrough though, so it's possible you did something slightly differently than me.

No, you are correct, you definitely have to