She is tolerable, I suppose. But she is not handsome enough to tempt me. Bingley, I am in no humour to give consequence to young ladies who are slighted by other men. Go back to your partner and enjoy her smiles. You're wasting your time on me. Just give me a few Weekend Download games and that's all I could ever need. 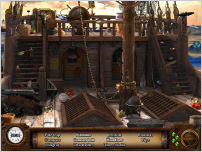 The Count of Monte Cristo (Windows/Mac, 47MB, demo) - A new hidden object adventure based on the Alexander Dumas novel of the same name, The Count of Monte Cristo follows (loosely) the same mystery/crime-tinted footsteps of Cate West - The Vanishing Files and Miss Teri Tale while sticking fairly close to hidden object convention. Investigate suspects to determine who is guilty while finding items and playing mini-games in-between stages. It's a lengthy and challenging item hunter with unique locations and an engaging setting.

Seven Minutes (Windows, 2MB, free) - From Virtanen, creator of Kaipuu and Painajainen, comes another simple yet meaningful YoYoGames' GameMaker project. Seven Minutes puts you in the shoes of a creature who has seven minutes to live. How would you spend your time? Striving to complete the game? Exploring each screen thoroughly? The game lasts exactly seven minutes, so you'll soon find out... 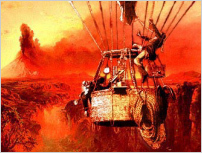 To Hell in a Hamper (Windows/Mac/Linux, <1MB, free) - A one-room text adventure game starring Professor Pettibone, Victorian balloonist who can't seem to reach an altitude of 20,000 feet. Soon he and his companion will be burned by an erupting volcano, so naturally its your job to save their hides. The puzzles are light, the pacing is brilliant, and the humor is... humorous! Nominated and recipient of several Interactive Fiction awards, so you know it's good. You'll need an interpreter to play the game, so grab the appropriate one before downloading the game file: Gargoyle (Windows), Spatterlight (Mac OS X), Zoom (Unix). Instead of downloading the game, you can also play it right in your browser window. But, you know, it's not the same.

DoomRL (Windows/Linux, 2MB, free) - Remember ASCII-character-based roguelike RPGs? Remember Doom, the first person shooter? Remember that Weekend Download where we featured a Doom game rendered as a roguelike? (Hint: It's the one you're reading.) Imagine the gore-filled carnage of Doom flattened, pixelated, simplified, pixelated again and turned into characters on your keyboard. Poof, it's DoomRL. It's a concept so strange you just have to try it.

Seven Minutes looks great, and DoomRL looks interesting. I wonder why it is 2 MB for an ASCII game...

I just tried out Seven Minutes, it has very tough platforming because I don't think I beat it all the way through.

However, I disappointed a bit by the fact that there was no exploration aspect. It was entirely linear, with only one way out of each room. I think if the creator added just a little more depth, not too much that it would be too hard to do in seven minutes, it would make it a more enjoyable experience than it already was.

The ending was depressing. ;_;

According to the game description, the game isn't over until you're seen the credits. Which means the depressing ending isn't the only one. Speaking of which, does anybody know how to get the good ending?

If you make it to the depressing ending, it pretty much will spell out what you need to do.

Stay in the first room for 7 minutes.

You can get the good ending by

Not leaving the first room after touching the blue orb. If you just wait out the seven minutes, you get the good ending. Try it.

best jig ever. and the quote is from darcy himself this time (just like i suggested...)

and seriously, i will pay someone to make a pride&prej game.

well it isn't a video game, but I just picked up a book as a present for a friend called Lost in Austen which appears to essentially be a Jane Austen Choose Your Own Adventure book. i find the concept hilarious.

Wow I really love To Hell in a Hamper.

Man, that Hubert really has been

stuffing his coat with stuff

Here are some hints:

"Search" the coat - and get everything you find

You should cut the coat.
Cant cut it you say? Perhaps it has a weak point.
How is it held together? ;)

Now that you found the stuff

- GET RID OF IT. It ain't as easy as it sounds though. Most things has a pupose before you throw it away.
But dont worry. Things have a way of showing up again. If it does... maybe it's meant to be.

Ha, you can try to murder Hubert with the mallet. Just do kill hubert.

wake the stupid dog? The clock doesn't seem to be the answer, since you can just toss it, and the trombone is broken.

Are you sure you can't fix the trombone?

Won't let you hit the dog with the trombone?

I figured it out.

I guess it's a bug or an oversight that they let you toss the mallet before getting the cricket ball.

the room with the dissolving tiles on seven minutes is really hard! is there a trick to it?

I bought the full game and I am VERY disappointed, as it is downright unplayable, especially in the minigames:

* Map reassembly: you can inadvertently put a map piece behind a screen decoration and lose it forever, as it is no more clickable. And if you do... you have to start the whole game from the beginning.

* Jewel grouping: it is not skippable and it is (obviously) completely random and sometimes unwinnable. Often, you have to keep trying for dozens of times before being able to get back to the main game.

* Other grouping game: no winning condition is given, so you just keep clicking without a sense until it mercifully lets you move on.

AND most of all, the main game secion is severely unpolished (i.e. "find the chain!" in a screen with 7/8 different chains, of which only one is actually right).

Bottom line: this game is so obviously rushed to be unplayable and very, very annoying. Avoid it like the plague, especially as there are so many alternatives.

It's not a bug or an oversight; you don't need the mallet to unblock the trombone.

Just try hitting Hubert with the trombone instead of the mallet!

i purchased the count of monte cristo and find myself dead in the water by a sudoku puzzle. i have a medical patch i have to wear that makes it nearly impossible for me to concentrate on numbers. i struggle when concentrating on objects, but with a little work, i can overcome those. but numbers? no way. can someone help me? i can get the puzzle to you easily, if you are a sukoku buff and you can get the solution back to me. i have several minutes left on my timer, but i realized pretty quickly i needed to not waste my time on my feeble attempts.

I love Sudoku puzzles and would be pleased to help you with it. Just post the grid of numbers here and I'll post the solution for you within a short time. :)

thank you. stand by. i'll get right on it.

By the way MarydaleEd, it just occurred to me that you could get a much quicker response by using an online solver such as:

...Not that I don't want to help you by solving it myself, I just think the above solver would be a whole lot quicker than I could do it myself. :)