It's old-school RPG fest here on this installment of Weekend Download! Three out of five games featured have that special "console flavor" those of us who grew up playing SNES games can't get enough of. Barkley Shut Up and Jam: Gaiden is a must-play simply for its odd setting and premise, while Legacy of Flan turns the RPG battle system on its head and Ethereal Dreams brightens your day with nice artwork. And if you aren't into the role playing scene, give BumperBlast or Teewars a shot for a little more action. 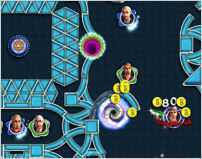 The Sims Carnival BumperBlast (Windows, 32MB, demo) - Another game in the Sims Carnival series (along with previously reviewed SnapCity), BumperBlast is a strange mixture of the Sims franchise with pinball, bumper cars, and the undeniably addictive Peggle. The goal is to tag floating Sims of the same group by blasting orbs across the screen. Performing trick shots, eradicating blocks and collecting power-ups to grant super shots are all part of the fun. Plenty of levels to play around in, although I'm not quite sure I'll ever get used to the idea of disembodied Sims heads floating around on bumpers... 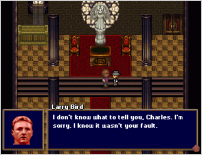 Barkley Shut Up and Jam: Gaiden (Windows, 62MB, free) - One of the most original storylines in an RPG I've seen in a very long time. You play Charles Barkley in a post-cyberpocalyptic Neo New York where basketball has been outlawed due to the use of a catastrophic Chaos Dunk. The basketball theme is everywhere, from famous players making appearances to basketball-based combat. It's a delicious RPG experience that's only slightly marred by timed-action button pressing sequences and copious amounts of swearing. Not for children! 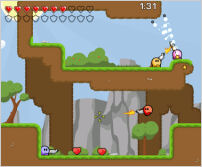 Teewars (Windows, Mac, Linux, free) - A great-looking side-scrolling multiplayer battle game that combines quick team skirmishes with Worms-like weaponry. Play several modes, including capture the flag, and wage ultra-cute war with several weapons and squishy Kirby-like characters. The only downside is it can be difficult to find a server with a steady connection, but when you do, it's worth every minute. 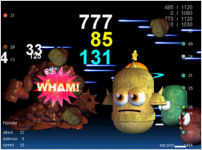 Legacy of Flan: Flan Rising (Windows, 72MB, free) - A game that by all rights shouldn't be as entertaining as it is, Legacy of Flan: Flan Rising is an action RPG with an intriguing battle system. During combat you earn experience and can upgrade and change the color (and thus function) of flans, making enemy encounters a wildly engaging affair. The overworld sections are forgettable, the quests and storyline not very interesting, the visuals a little stark, but for some reason I found myself playing this game for a very long time. 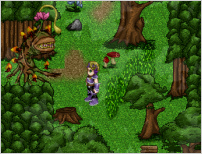 Ethereal Dreams (Windows, 50MB, free) - A fairly standard RPG that stands out of the pack thanks to some nicely-drawn (if slightly cutesy) artwork. Expect a good dose of turn-based battles, spells, quests, items, and equipment in this fantasy world. A unique encounter orb shows how close you are to a battle, letting you skirt around noisy terrain to avoid certain encounters. This is just a demo, as the full game isn't complete, but gives a good taste of what the final product will be like.

hey Jay, the link for Ethereal Dreams doesn't work as I get a cannot find page when I try to use the link.

nm, it worked a second time, not sure if it's just linking from the main page of JIG that it happens or within the entry.

Is there a manual for Ethereal Dreams anywhere? I've figured out most things by trial and error (arrow keys to move char/cursor, space/enter to talk/activate/accept, and esc/x for abort/up-menu), but I can't change item categories in the inventory.

does teewars have local multiplayer or is it only server?

The Sims Bumper Blast is a fun game. Best "Sims" I ever played, honestly. (I hate Sim games.) This one was fun, but I coulda done without the cheering disembodied heads.

There should be a read-me included with the Ethereal Dreams Demo that states all the controls.

Q and W can also be used to change the item category.

Teewars looks fun, but I can't find a server with a low enough ping...

Teewars has a LAN mode. I haven't used it, but it's there...

I'm not having any networking problems with Teewars (on a 12mb/s cable connection). Try turning the video settings down. I don't think graphics are optimized very well and I have to use much lower settings that I would on a commercial game. Also, it is fun. :)

Ethereal Dreams is an exceptionally well done game. I've played many web RPG's and I must say this is the best one I've seen for quite sometime. The characters are believable and there is a good storyline which encourages you to complete the game because you want to know what happens next. The artwork on the face panels is excellently and even the in game art is one of the best for this type of game. Bring on the Full version.

Has anyone finished the Ethereal Dreams demo? I'm in the mountains looking for bandits...

I've found 5 chests and explored two cave entrances, but I'm blocked by a chasm to the north and a rockfall in the caves.

Am I overlooking something, or is this just the end of the demo?

Funny how nobody commented on Barkley Gaiden yet. I think it's a pretty darned good game. Funny at times too. For instance, the two language options in the configuration menu are "English" and "Al Bhed". Seriously, if you switch it to Al Bhed, it'll start making everything hard to read. And all the save points have long speeches about how Japanese RPGs and their related features are cool (a bit fanboyish, really), but presents the idea in an elaborately worded manner, while indirectly discouraging you to use the save feature as a crutch. Anyway, just give the game a shot.

I was about to say the same thing; people seem to be ignoring Barkley when it's by far my favorite of the bunch. It takes itself waaay to seriously, but that's completely intentional. The game is so hilarious that you actually feel silly when you start to care about the story, yet the game pulls off its serious moments remarkably well. All in all, a fantastic indie game among games.

By the way, it is one of two indie games to have a spot on GameFAQs (along with Cave Story). If there are more, I haven't seen them.

Here's the link, complete with an FAQ, maps, and a message board.

Generally high ping is what I expect of online games - I'm living in Australia, and it seems that there's no local servers around here.

push the rock in the 2nd level of the cave, but it landed near a chest on the other side of the water, and I can't reach it!

I can't figure out where to go from here...Do I have to start ALL over?!?!

Just FYI: Al Bhed was a fictional language in Final Fantasy 10, which is what the Barkley game is referencing.

The save points are supposed to be parodies of JRPG fanboys.

Please help - I am stuck on the bit with the boulders to push - what do I do?

I must be missing something, because I can't find where to go to find

the evil tree trunk somewhere in the Fungal Forest. I've been through the forest multiple times and I'm at a complete loss.

@Anonymous: I don't know if you're still stuck, but

@Lily: Ah, this is a common issue.

finally got around to finishing "barkley" the other day... well worth the time. the ending is slightly predictable, but getting there was awesome. i'm actually in the middle of playing it for the third time now, trying to pick up on some things i might have missed before. what amazes me about this game is the fact that there were two separate points in the game where (i'm not making this up) i laughed for a solid five minutes each. totally worth it, and i can't wait for part two!