Nothing like a little nostalgia to start the weekend! Be warned, though. This nostalgia comes with a price. That price is your sanity. Because the games are difficult. But that's good. Go play.

elarel (Win/Mac, free) - Time to torture yourself with pure logic! You have discovered a cave filled with treasure and decided the best thing to do was dive in and collect it all. Problem is there are all sorts of things in the way, such as fences, spiders, conveyor belts, gravity shifters, and other enemies. One part Boulder Dash with a touch of Sokoban, elarel is 22 levels (with 11 user-made levels) of extra-challenging and extra-satisfying puzzle solving. 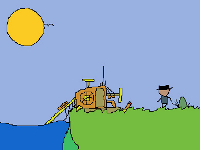 Jerry Clouds (Win/Mac/Linux, free) - Pick up potion, carry to cloud machine, pump some water, repeat. Then... wait for nightfall. Then... NO SPOILERS. A very short and simple game that's more of an oddity than a riveting interactive experience. It's still entertaining, though! Note that the download link is only for Windows. Mac and Linux users should play the Jerry Clouds browser version.

Amulets and Armor (Win/Mac/Linux, free) - Remember first person CRPGs from the '90s? That's what Amulets and Armor is, and it's great! First released in 1997, the game was met with little fanfare. Now a new version has been worked on, making the game easier to play on modern computers with a handful of bug fixes and a native Windows version! Read more about the story behind the game, then start playing, because it's good. Mac and Linux users should download the DOS version of the game and run it using the free DOSBox software.

I only see a DOS and Windows link. How am I supposed to play the game on OSX or Linux?

"Mac and Linux users should download the DOS version of the game and run it using the free DOSBox software."

I realize this thread is as dead as the proverbial door nail, but I just finished Elarel (v. 1.04/23 levels) and thought it was quite good. A tribute to the great old Mac game Blobbo, it has a lot of that game's hair-yanking puzzly goodness. Puzzle games (that is, a game offering a connected group of puzzles) is one of my favorite game genres but alas are quite rare.