Choose your own introductory paragraph! A) I'd rather have something short and informative, but please make at least one joke about cheese. B) I don't have time to read this, I have too many games to play! C) I can't find the parser input line. Help!

Vertex (Windows, 39MB, free) - An early-release demo of a game that's been in production for several years and is still a work in progress, Vertex is on track to be the next massive-hit metroidvania. Inspired by the likes of Cave Story, Chrono Trigger, Spelunky and Super Metroid, Vertex drops you in a world that encourages exploration with multiple branching non-linear paths, upgrades, an RPG-like equipment menu, item shop, and much more. The game already looks and sounds fantastic, and the demo is nice and meaty, so you won't feel sleighted when it ends. You will, however, want more, and with any luck, that dream will come true soon enough!

Rogue Moon (Windows, 5MB, free) - A short physics arcade game where you must try to slingshot yourself from planet to planet. Using an unwieldy energy beam, tap the [arrow] keys to influence your direction. When you're close enough to a planet, you'll attach a beam to it. Sling yourself away, though, and you'll eventually break free of its gravitational pull. With any luck, you'll latch on to another planet and continue your journey forward. Takes some time to acclimate to the controls, but once you do, you'll love the spacey feel and the awesome visual presentation. 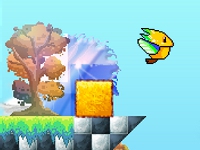 Omelette Boris (Mac/Win, 8MB, free) - A nice little puzzle platformer made in 48 hours for a game jam earlier this year. In Omelette Boris, you start as a chicken, running and jumping around as chickens do. Your goal is to work your way to a special block that transforms you into a rolling egg, then get that egg to a block that will hatch you. Since eggs are fragile, you'll spend your time as a chicken pushing blocks around and stacking bales of hay to form soft landing spots. Good challenge, great visuals, and an all-around good time, especially for a game made in two days!

Hmm. I know that note about the games running under Win7 and being virus-free is boilerplate, so in this case I have to ask if this testing has *actually* been done in the case of Sonic 2 HD...since the page itself warns that virus-checkers claim there's a Trojan in the zip file.

Yes, everything I feature is tested. The Sonic 2 site just points to false positives some anti-virus programs generate. The note there says it's safe.

JohnB - Might want to double check that...the malware I'm now having to remove from my computer says otherwise!

Are you sure it came from Sonic 2 HD? What specific malware did you find?

In the meantime, I've removed the game from the post until this can be re-verified tomorrow.

Jay - certainly seems to be. A 'setup.exe' ran when I clicked the link and instead of Sonic HD it started an install for 'MyStart Incredibar'.
I stopped the setup asap however not before it hijacked my browser (replacing the homepage and bypassing entries typed into the address bar to a 'MySearch search engine'). Looks like Malwarebytes has cleared it so no lasting damage. Wasn't running anything else at the time so have to assume it was the download link on the Sonic HD page.

Rogue Moon was a nice experience, although it felt like they could have done more with the story. It feels like it ends rather abruptly...

As for the S2HD debacle, I've heard that the "trojan" is due to problems with a misbehaving staff member behind the scenes. From what I've heard though, it should actually contain one? Still, the scare Kenickie's posted is worth investigating.

Checked again, using both an anti-virus program and two different malware scanners, and everything's clean. Very likely your source was from something else, there's also no setup.exe in the download as well as no attempted toolbar installs. If they really do have a staff member who's misbehaving, like JDGA said, we'll leave it off the article in case something screwy goes down in the future.

Jay/John B
Just for info - I've just tried to replicate the problem I previously had and it looks like the issue I was getting was through the 'Mirror 2' link (presume I clicked this in haste the first time). Following this link leads to a big green download button which again tries to install a file named setup.exe which needless to say I'm not proceeding with!!

The main download link appears to download a legit zip file though my virus checker now flags a malware warning whenever I try.

I'm no expert so all I can say is it seems as though the download is the cause here. Just wanted to update you as I know you (and all the reviewers here) value the integrity of your links highly. I don't consider this integrity has been compromised in the slightest though I do think there is a risk attached to the Sonic HD download.

Despite having gotten here after this whole malware mess, I think I can understand what happened to Kenickie. When downloading files from certain other websites, I've occasionally seen banner ads designed to look just like "Download" and "Play now" buttons, presumably to trick viewers into clicking them.

So the game itself was most likely innocent of all charges. Our unfortunate gamer simply fell for a malware ad link.

@soniclover perhaps you're right... I did wonder this myself and it's something I usually keep my eye out for. The warnIngs On the download site plus the fact I was duped still don't sit well with me but c'est la vie... Let's just 'game on'! cheers guys. K

I appreciate you reporting your experience, and I think it's best that we just leave the game off this week's selections to prevent anyone else falling trap to what you did.

Well, after the debate these annoying 'DOWNLOAD THIS' banners caused, time for some frustration venting!

Does anyone managed to get past the

Didn't try much yet to be honest, but I tend to get frustrated on how difficult it is to get a hit, let alone kill it. Anyone any ideas or should I just keep trying? ;)

Duh, power of posting, just had to be quicker and smarter. Solved it. Now battling with what I expect to be

the final boss thingy, it's relatively easy to kill the surrounding things, but the big eye is a pain!