A rousing mix of games this week, featuring pleasantly strange free releases alongside some sturdy demos. A bunny who likes to yell? A demon that can live in a candle? That'll get you to sit up straight and start downloading some games!

Deity (Windows, 180MB, free) - When was the last time you thought "Man, I could go for a good isometric stealth action game right about now!"? It was probably quite recently, and since you wished it, a team of students at DigiPen made it come true! Deity is a short mouse-controlled game where you play as a demon who is damaged by strong light. You can move around by leaping into light sources or possessing guards via a similar mechanic. As you snuff out light and travel through shadow, you'll also learn to string together chain movements to really take foes by surprise. It's a great little game that shows a lot of promise, but at the moment it's rather thin on content. The team does have plans to release more levels and a level editor in the future, though, so this unique experience is far from complete!

ˆ_ˆ (Windows, 3.5MB, free) - The master of short-form adventure games, Ben Chandler, creator of Annie Android, Eternally Us, brings us another bite-sized retro game that has, perhaps, the most unusual name we've seen for a release we've seen in months. ˆ_ˆ is the story of Julian who is, apparently, the father of the were-bunny race, but he's not so happy about that role. Your job, then, is to help transform him back into a human being, using a combination of biting and headbutting! Not as smart or meaningful as Ben's other releases, perhaps, but it more than makes up for it with wackiness. 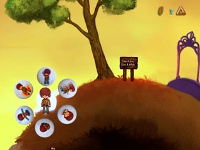 Pitiri 1977 (Windows, 56MB, demo) - Your brother was kidnapped by aliens, but with your special skills, it's a good bet you can get him back. This 70s-styled platform adventure sends you across all kinds of crazy landscapes, challenging you with physics puzzles and harrowing jumps while providing you with a series of psychic abilities. The artwork is phenomenal, and the storyline is charming enough to keep you playing on its own. Pitiri is slow to start, but once things pick up, you'll be good and thoroughly hooked on this budget-priced title.

I saw ^_^ on another site last week. The gimmicky name enticed me.

The game is silly and unorthadox, but overzealously so. What otherwise might be charming nonchalance becomes just a little bit irritating. This unfortunately dovetails with the puzzles, which I found illogical and reduced ^_^ to a "just try every combination until you win" sort of game.

That said, the graphics and, hey: bunnies!

I'm wondering, does Pitiri 1977 really provide you with a series of physic abilities, or are they in fact psychic abilities?
Anyway, I had a look at the trailer on the game's website. It looks pretty, but not really that interesting...
And I'm not sure why the developers think 1977 is so exciting. :-P

I have 3 records, the magic spell note, and the feather. I have the balloon, and it is hovering over the hat.

Ooo, looks like lots of good games out this weekend... so many...so little...I wonder if I can take off work all next week?

diety_setup.exe removed as containing a threat by Norton Internet Security. I assume this is a false positive, but holding off on installing/playing this for now.

Right-click is the look. Try looking at things.

Thanks Mystify! Now I'm stuck in the same part as you AHHAH figured it out already?

troas: It's a false positive. I downloaded and scanned everything myself before featuring it, and not with Norton.

@LuckMage26
Nope, still stuck. Try everything on everything has failed me.

@LuckMage26 and @Mistify
it seemed to me that when you talk to the balloon, it goes the opposite way. So try this :

Now i found the hair of the witch, but I don't know how to get it :(

oh well I finished ^_^! it's nice, I love Ben Chandler's works, but in this one sometimes you can't logically understand what you have to do... By the way I really loved how he decided to show us the credits of the game :)

Hahah finished it too... cool ending xD but sort of click-untill-you-find-the-solution game, as someone said earlier...

Just tied the witch's hair to the balloon,after getting it with the box guy, aaaand send it to her..

I figure being a werebunny you have certain abilities like ...

biting or headbutting it

but I can't figure out how to do it

The balloon will not go lower for me. I tried getting it to stop above the crow and I tried saying RAAAA to the crow but nothing happens, the balloon just stays put. If I try talking to the balloon here of course it just goes to the left.

Am I missing something here?

Ah! Got it! I suppose it helps when..

you figure out how to work the gramaphone properly

remember how you got the feather off the row before? Headbutt the headstone

I've finally finished! Tricky game with clues not being obvious but still good

Thank you IrishDoris! I had been trying to just talk to the crow normally.

I assume I have overlooked something blindingly obvious, but

how do I get the balloon? I have 3 records, feather, rose, spell, and the receipt, but no balloon. I can't figure out what to do with the cart, either.

@booper613
There's someone at the cart who is currently invisible (and dead). Do something nice to get their attention.

Use the rose on the headstone.

namely "Heartbreak Toast", "You Can Bank on It", and "Happy Leg Jamboree"

a feather, a coin, and a note

that used to be a kite that contains a spell.

The following has happened:

I annoyed the vampire until he left

a rose, which I

placed on the headstone.

Now I need to

destroy the coin. HOW?

If I had not read other people refer to

a balloon, I would be utterly unaware that it was an item I needed to get at some point.

@ray9na
Have you tried playing all of the records?

Y'know, I saw that thing before, but I hadn't noticed clickability.

Is it possible to paint yourself into a corner?

maybe if you looked at things from the other side, aka

I have 3 records, spell, feather. I've used the rose on the ghost. The music note won't let me open a bank account. I can't open the trapdoor. I can't get the box to do anything. I can't interact with the lamp or the piggy.

I clicked through the spell word options, and got the right combination on the first try, without

I lost my 5c to the bank before finding the ghost, and the receipt doesn't work on the note, the ghost, or the cart

Don't worry about the account bit. Try the other option.

Well, that sucks! If memory serves, the receipt ought to work on the

Is it possible it's glitching because you skipped a step it was expecting?

got the receipt too early. That, or casting the hat spell before reading the unfolded kite.

Oh well, have to restart.

I agree. The credits were very cleverly done.

get the vampire to wake up? ive tried biting, poking, talking, tickling him with a feather and headbutting him.

...solve the puzzle of the instructions on the kite, and you'll be exactly where you need to be.