This happy weekend time, we are proud to present: fun games! Really, really fun games. It's like, if you wanted to get a bunch of games together that were just plain fun, not so much challenging, not so much brain-taxing, just awesome fun, then you'd assemble something like what we have below. And then you would go play them and have some of that fun everybody's always talking about!

Mecha Spider Island (Windows, 14MB, free) - A lone ark sails the skies to deliver animals to the Earth. An extremely sci-fi-related time vortex occurs, leaving only two animals: a giraffe and a frog. Then the rift combines the two, and somehow a gun comes into play. Now, you are the giraffrog, leaping across 2D retro terrain, shooting mechanical spiders as you climb your way to the top to defeat the ultimate robotic arachnid foe. Mecha Spider Island is everything awesome about retro games, featuring level design and gameplay that screams "unbridled fun" and a soundtrack that, if it were any happier, it would be illegal in some countries. Do yourself a favor, go play Mecha Spider Island!

Grief (Windows, 14.4MB, free) - From Magnesium Ninja Studios, creator of free downloadable indie games such as Bun-Dun and Everclimb, comes a game about happiness, sunlight, sorrow, and darkness. And puzzle platform adventuring! Trot through a nicely-drawn 2D world as you switch between the light world of optimism and the dark world of pessimism, each with its own exclusive obstacles, platforms, and abilities. In the light, you can jump higher and will find orange pieces of ground to stand on. In the dark, you can crawl under tight spaces and stand on blue platforms. You must creatively use these abilities to grab the teddy bear in each level, and the game doesn't shy away from making you do some serious thinking to get the job done. 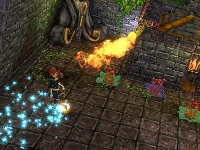 Terra: Legend of the Geochine (Windows, 283MB, free) - A curious little experiment created by students at DigiPen Singapore, Terra: Legend of the Geochine is a fantasy-themed 2.5D action/exploration game that puts you in control of both a character and the environment. You have a fairly standard set of objectives and moves at your disposal, moving in the four basic directions along with attacks, jumps, and a spell or two. The neat part is you also have control of the world itself, holding a button on the mouse to tilt the screen in any direction. Naturally, tilting the world moves everything on the screen, opening up possibilities for a number of labyrinth-style puzzles and other orientation-centric gimmicks. A very interesting concept that's just simple enough to work yet complex enough to be interesting, and the artwork is of top quality, too! Note: Terra requires Source SDK Base 2007 and Steam to run. If you don't have either installed, first download Steam, then go to "View" followed by "Tools" to grab the Source SDK Base.

Terra is an interesting concept, and I'd like to see it expanded into a full-scale title. The only real issue I had with it was the spore-like enemies (the ones that roll around); in most cases, they appeared by dropping in from above, leaving you with no time to deal with them. It didn't help that they had the ability to roll around in spite of how you leaned the room.

Still, another well-made concept piece from DigiPen; hopefully, Valve will take these guys in to turn it into something bigger.

The scream on one of the levels on grief ruined the mood of the whole game for me entirely. It's on the level where the ghost like things first start showing.

Things like that completely ruin the ambience specially if you start out as a seemingly melancholy game where the player seems to be a girl having trouble.

shame too because the music was what really got me playing so I raised the volume.

thanks but you can keep your messed up game.

Well see, the scream was in the "Bargaining" stage of the game, which is the of the most disconcerting and abstract moments of the Grief cycle. Grief explores the Kubler-Ross Model through gameplay, and I don't know if you've encountered anyone going through clinical depression or even just plain sadness, but it tends to miss with your mind at least a little bit.

The game takes place in the girl's mind and that stage was a culmination of her psychological strife at it's most primal. Yes the game is melancholy, but it's also dark and brooding and the scream only helps the ambience, not shatter it.

Sorry for scaring you.
-Worthington, Lead Designer and Writer of Magnesium Ninja Studios

P.S Thanks for the feature Jayisgames! We love you!

Well see, the scream was in the "Bargaining" stage of the game, which is the of the most disconcerting and abstract moments of the Grief cycle. Grief explores the Kubler-Ross Model through gameplay, and I don't know if you've encountered anyone going through clinical depression or even just plain sadness, but it tends to miss with your mind at least a little bit.

The game takes place in the girl's mind and that stage was a culmination of her psychological strife at it's most primal. Yes the game is melancholy, but it's also dark and brooding and the scream only helps the ambience, not shatter it.

Sorry for scaring you.
-Worthington, Lead Designer and Writer of Magnesium Ninja Studios

P.S Thanks for the feature Jayisgames! We love you!

@Worthington: Can I just say that you did a fantastic job on Grief. Nice gameplay, nice story/meaning and the music fits perfectly (as well as being beautiful).

Grief: dont understand the L button.. in the first level it is shown I press "L" near the L ground but nothing happens - tried both in dark and sunny atmosphere. any help?

L is the "ability". In optimism, it will repel a Manifestation (ghosts) sending them back, and in Pessimism, it will allow you to hide from them, letting them pass you by.

Thanks! The music is courtesy of Nik of Nikgames. Check out his stuff, he's a great game maker.

Holy cow, the third game mentioned by us on Weekend Download! I know Worthington already gave a little mention, but we really have to thank you guys at jayisgames.com for featuring our games. When Everclimb was first featured, we went ecstatic over the post. So once again, thank you jayisgames.com for the feature

-Caribou, Sound Design and Sit Around and Watch the Others Work guy at Magnesium Ninja Studios

Wow, thanks for featuring our game.

@HeroForge : Tilting actually did make the spores roll a little bit slower, maybe not slow enough though. Hard thing to balance and get right.

As for how they appeared, yeah we had a few other ideas, some which you see in game. But should have probably made it consistent and not so sudden.

I can't find the source SDK base. any help?

- Go to your library of games.

- Look for the ALL GAMES drop down menu

If you still can't find it, you need a Source game like HL2, TF2, Portal, etc... for it to appear under tools.

And thanks for featuring Terra.

Grief was so frustrating in the later levels, it took a while to set some things up, and then one little mistake and it's back to the beginning. Nicely thought out, I couldn't imagine it being challenging at all but it really does get quite difficult after level 12. I don't know what screaming thing someone was on about though.

Grief was an excellent game...until I got to level 7. That stage has me completely stuck. I know that I'm supposed to

use the multicolored ball thing to change the last or so optimism portal to pessimism, but how am I supposed to get it over there?