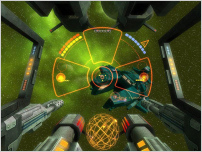 Protector (Windows, 73MB, demo) - A gorgeous 3D shooting game that puts you in the seat of a stationary turret floating in the stars. As meteors and mines zip in your direction you must destroy them before they crash into the planet or damage your turret. The unique 3D map shows you from which direction baddies are coming and forces you to find (and oftentimes zoom in) and destroy them one at a time. While the action takes some time to heat up, eventually you'll level-up your guns and encounter faster, tougher enemies that will force you to choose between your own safety and the planet's. Hint: choose the planet. A fun and intense game that's a real treat to look at and to play.

Chromatron (Windows/Mac, <50KB, free) - Chromatron is a series of wonderfully evil puzzle games. The laser-and-mirror concept is familiar to many (see Reflections and Aargon), but Chromatron has some unique pieces of its own to twist your brain around. Until recently the original game was a free sample to entice players to buy the sequels, but now all four games are free for download. (Cheers to Shep and Dan for sending this in!)

HoldoffRed (Windows, <2 MB, free) is a simple shooter game with some RPG elements that give it a suprising amount of depth. You are a heart that needs to defend itself from woes by shooting them. You gain levels with points you receive from shooting your enemies which you can use to upgrade your health, energy, or damage. Keeping a good balance between the three stats is extremely important in surviving later levels. With 8 unlockable special attacks, and several unlockable modes, this game will keep you coming back for more, and is perfect for a quick round or two on your coffee break. (Thanks, Kero!) 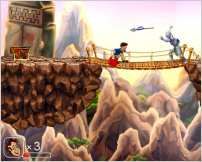 The Tuttles: Madcap Misadventures (Windows, 100MB, demo) - An arcade platform adventure game with a touch of zany. Oh, and there's a flying van you get to pilot! You'll recognize a few of the voices in the game, including Bob Saget, Dave Thomas, Jamie Lee Curtis, Dave Coulier, and William Shatner. Best of all, 75% of the game's purchase price goes to Starlight Starbright Children's Foundation and benefits seriously ill kids and their families. It's a great little platformer made for a great cause.

Jumper Redux (Windows, ~2.3 MB, free) is a challenging platformer from the maker of HoldoffRed and An Untitled Story which puts you in the place of a robot who is trying to escape a science lab. The levels in this game do get difficult quickly, but none are impossible. With two modes to choose from, Original and Redux, there's loads to keep you occupied and frustrated for days (or weeks if it takes you as long as I did). And with multiplayer mode you can even race against your friends online to see who can finish the fastest or with the least deaths. (Thanks, Kero!)

Oh man have I wasted a lot of time playing Hold Off Red. Great game.

You don't actually 'download' The Tuttles demo to your PC the way you'd think. It downloads within an online screen.

Ignore what I just posted. That was for the Dvix player. Kind of a messed up site.

You know what? Just forget the Tuttles game till someone posts a walkthrough on how to download the demo.

The Tuttles demo link is on the main page. It's the big icon towards the middle on the right side that says "Download". The demo link at the top leads to a video preview, which admittedly is confusing.

Jumper incompatible with vista? Mine just 'stops working' immediately after I open it. I'm using Vista through Bootcamp on a macbook.

Jumper is a little finecky about opening. As soon as you open it don't switch windows, just let it do its thing. If that doesnt work try running it in compatability mode. Otherwise i don't know what to tell you :(.

Jumper:Redux is a remake of the original Jumper game, and there is a Jumper 2 available from the Helix Games website.

The online highscores for Hold Off Red don't seem to work (and apparently never have, according to the forums at Helix Games). It sounds like the best that people have managed is 39,000 points and Wave 21. I got up to 26,000 and Wave 20. How has anyone else fared?

I've also unlocked all but one color, and I don't know what else I need to do (except maybe play a large number of times - I'm only at 50 games so far).

Combos are a necessity to get a high score. I've had the best success using the "bounce" special.

Jumper is cool, but the difficulty is punishing.

I have reached 6-1 and find it utterly impossible - I just cannot pass that first downward slope "gap" in th electric field right after you pick up the gold star. I think the physics engine is messing with me - the gap has an angle of about 45 degrees yet gravity pulls Omgo a few degrees less so I always die right near the end.

Is this level passable with keyboard or you need an analog stick to even try?

I've cleared the original Jumper (all levels are passable, although some are very hard). Just don't give up! (Not even in Sector 7, in which I almost did)
In my opinion, Jumper Two should also be in this Weekend Download list, since it has some brand new moves, hidden gems in each level (providing a great replay value), lots of unlockables, new bosses, better graphics and sounds, a new story, a level editor and the good, old and vaguely passables obstacles. Did I mention it's only 2.5 MB?
If anyone wants to download Jumper Two, this is the link: http://www.helixgamesinc.com/games/JumperTwo.zip

HAPPY BIRTHDAY JAY!!! (a little late, but I guess it's OK)

I agree baba, that slope in 6-1 seems impossible.

Has anyone else had their virus-scanner trigger when trying to download the Chromatron games, other than the first one? Mine keeps going nuts..

HoldOffRed is so frustrating! I got to 103 for a combo (normal) but I died and can't get custom mode! AGHHH! I NEED HELP! Please???

My hint to you for HoldOffRed: Press space alot. I still need more than that to help me though...

I got custom mode on Hold Off Red, but I'm not exactly sure how. I had played around 85 total games, and I already had some pretty good scores (25000 +), including combos of over 100.

I don't know if this was the trigger, but Custom did show up for me after an especially good game - 35000 points, and a super combo of 120.

No wonder I can't get the last color - according to this forum:

As far as Hold Off Red is concerned, I'm a big fan of the Brute special. The health and energy restoration is invaluable in later waves; for best results, target one of the big yellow Woes.

Yeah, I've gotten the furthest with Brute. On later levels, there are enough woes on each wave to recharge the special, and you use Brute to recharge your health each time. I'm so close to the standards now - I've managed 63,000 Normal (lvl 25) and 16,000 Hard (lvl 16).

Where is a walkthrough of the secrets in each level of The Tuttles Madcap Misadventures? There are 41 levels, 26 of which are available after you beat the game once.

Umm, I really need help with 'The Tuttles.' I am stuck on chapter seven and I am really close to being done. Please help me!

I am trapped on level 14 with the mom in the jungle.I can not get the last item and I can not get onto one of the platforms. I am really needing some assistance!! Please help!!!!!

ok. it was 'hard' to find, but i found a new place to download it from. YAY! http://www.mattmakesgames.com/games.php

[Edit: Thanks, zace. I've updated the links above. -Jay]