It's time to make with the games! Or, to play the games that have been made for playing! Several fun little diversions below, and if you ignore hyphens (which, let's face it, we all do), each one has a one-word title. Isn't that... neat? 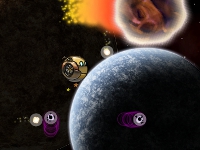 Bun-Dun (Windows, 18MB, free) - In the beginning, there was nothing. Then there was Bun-Dun. Bun-Dun decided to create everything, so he made the universe. Then, Bun-Dun made himself. Looking out into the universe, he decided it was very empty, so Bun-Dun set out to collect energy so that he could make worlds filled with things to interact with. Help Bun-Dun out by guiding it around each stage, collecting good energy and avoiding just about everything else. The story and sense of imagination is a great wind-up for a simple sort of game, but it's charming and oh-so enjoyable from start to finish. Bonus: Bun-Dun is from the creator of Everclimb!

Candles (Windows, 101MB, free) - If you ate up games like Amnesia and Penumbra, Candles is just your thing! A dark, first person exploration game, you find yourself trapped in the forest with little more than a few torches to show you what's around. Some imps have taken over your house, and you must use the light to clear them out. A remarkably atmospheric game, best played at night when you're feeling extra timid. It's on the short side and is not without its glitches, but well-worth the experience.

Monica (Windows, 7MB, free) - Gravity-flipping games are all the rage, especially after VVVVVV graced our screens. Monica is another simple puzzle platformer in that vein of titles. Once upon a time, a little girl was feeling lonely and bored. She wanted to find someone who loved the color pink, so she invented a playmate for herself. You are that imaginary friend, walking and hopping through 20 levels trying to color all the blocks pink by touching them. Tap the [spacebar] to reverse gravity, pulling off some mid-air stunts that would even impress fans of VVVVVV.

I don't regret the few minutes spent with Candles. That's a good thing! ;)

Most bugs are harmless. There is, however, something that bothers me more:

There is a very specific way of turning the handle of the generator and If you don't find it right away you won't know if you just need to keep turning infinitely or it actually needs fuel, as the letter said. After that's done, one would expect to see the end of the game or at least some sort of message.. I was surprised when walking aimlessly in the house clicking the bed gave me the end of the game I was expecting!

Hmm, Bun-Dun was okay. It does what it does pretty well. Candles is a great "free" version of Amnesia, I think. Just one thing: I have a computer that runs Amnesia flawlessly, but Candles really stutters for me when I play it. I also touched an Imp, died, and the game stayed black instead of going back to the main menu. Ah, well, I guess it IS free.

I just started Candles. I'm stumbling around in dark, can someone point me in the right direction to get me started?

I found the second streetlamp and torches. And I can see two more torches up high in the distance, but when I try to make my way over there I seem to fall in a hole or something? If there's another way to go I can't make it out.

@HulaZombie
Maybe you need to adjust your monitor or there's too much screen glare, because you should be able to see the path even in the dark.

Monica was a very nice clone of VVVVVV. But, there are only 20 levels, most of them are quite easy, and the unlockable thingy is disappointing.

@Diego
My monitor is set as bright as it can go. My graphics card doesn't do well with dark games, I guess this one is too much for it :(

I tried finding my way by trial and error, but no luck. Shame, I loved Penumbra and really wanted to play this one.

There is now also a Mac version of candles. And if you have problems, the author Lasse is giving help in his blog.

Well, if I remember well, it's pretty much a straight path from light to light.