Confession: every writer behind the scenes at JIG is secretly some kind of mollusc. We hide it quite well, wearing suits and blazers and little thingies in our hair. But when you watch us walk, you start to wonder if something's a bit off. When you see us dance, you're sure of it. 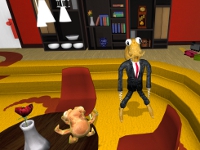 Octodad (Windows, 336MB, free) - Fitting in is never easy. Especially when you're an octopus masquerading as a human dad! Created by students at DePaul University, the same university that housed the creators of Devil's Tuning Fork, Octodad is one of those games that mirrors itself in the control scheme. Moving Octodad in 3D is an exercise in imprecision and hilarity, as you must pick up and swing each leg individually, sliding the mouse around to gain ground. More often than not, you'll end up in a funky position. Gripping objects is handled in the same manner, and you'll probably knock over more things than you'd care to admit. But it's awesome to play around with, and the story keeps you driven to move forward and explore new rooms. Don't raise suspicion, try to blend in, and you, too, can be a successful Octodad!

Maze of Space (Mac/Win, 9MB, free) - So, you remember that guy named Petri Purho? The one who made all those cool games, including Crayon Physics? Well, here's another experimental game crafted for the love of the art. Maze of Space is a roguelike RPG with visuals inspired by his other experimental game, Post I.T. Shooter. Crawl through the chunky pixel passageways, uncovering squares of territory as you move. Fire your weapon to take care of enemies, and pick up any loot they drop for your own personal use. You'll find equipment to increase your stats as well as gain levels, so most of the basic trappings of an RPG are here, minus the bloat. Note: Only the original version of the game is available for Mac. Version 1.1 for Windows features a few fixes.

Snakes of Avalon (Windows, 63MB, free) - A short adventure game with a whole lot of dark comedy, drinking, and possibly a guy who refuses to leave the loo. You start off more than a bit tipsy at the bar, unable to buy another drink, and believe it or not, things go south from there as you discover a murder plot. Four acts to play through, filled with hallucinations, surreal events, and a lot of mystery. This is one weird game. Also note: this isn't exactly the best sort of game for the younger crowd, in case the description above didn't quite convey that!

Anybody else having problems with the Octodad game crashing and giving a 'not responding message'? The first time it did that was in the daughters room when the game lagged out then crashed. The next one or two were while the game was loading and the latest was just about when the movie sequence for the sons room was to end (right at Octodad doing game face)

Anyways, going to try a few settings to see if it will stop crashing, otherwise I have no idea why.

Maze of Space would appear to have Great Dungeon in the Sky sprites.

Same here. Octodad crashed for the third time when I said forget this and uninstalled it.

That game is unstable as it gets.

I updated my video card driver and that didn't help, also it crashed again, this time right after the end of the tutorial.

Maze of Space is a good example of why experimental games usually don't do well. The concept behind the graphics is pretty interesting in theory. Painted pixel art? Cool! In practice it turns out you just want to zoom out by about 4x so you can actually see something, which would completely negate the effect.

Now to rest my bleeding eyes.

smjjames, I'm having the same issue here. Wish I knew how to fix it because this game is hilarious.

I found "Maze of Space" to be interesting even though at first it was difficult and looks zoomed in, after about four deaths, I got some kills and then better weapons and armor.

I haven't tried Octodad yet, saw the trailer, I thought I saw something about a update doing about graphic cards and a better version in the news. Hope that helps.

I'm judging by the screenshot, but it looks like Snakes of Avalon was made with Adventure Game Studio (it's a freelance LucasArt style adventure game engine, so if you want to make your own games, it's a choice).

@Miles O'Toothpaste: Yea, it crashes unpredictably. The best you can do is to report about it on the game forums. It doesn't help that the crashes seem to erase saves.

Also, a whole bunch of people are having similar problems on the forums, so... yea, its not isolated.

They are trying to fix it but they need some info (as posted on the forums there).

@Person of Awesome: So *that's* why it looked familiar... You are correct.

I just beat of Maze of Space on my 6th try. Not too hard once you've picked up a few good items. Fun game :) The shakycam and the slow movement have apparently been corrected in v1.1, which is only available for Windows right now.

Other than that, it was absolutely charming. The animations and voice overs were great, the presentation was handled well, and the goofyness and lack of control were great as concepts. Just not great when the little control you do get doesn't respond properly.

The Great Dungeon in the Sky was part of a compo on TIGSource where all players had to use a common set of public domain sprites. That's why a bunch of games have used those same graphics.

Maze of Space using those same characters has nothing in common except they dipped into the same set of public domain sprites.

OctoDad is better than OctoMom!

In the end credits of Octodad, does anyone know if...

...destroying all the strawberries and flowers does anything?
I was down to the last rose when the sequence ended.

signing in as a guest but wanted to say I thought Maze was a beautiful game. Wish I had a good sunday afternoon to indulge. Yes, a bit straining on the eyes but the aesthietic is so beautiful.

I had some trouble with Octodad - namely that half the time the legs wouldn't actually lift when I told them to lift, making climbing stairs literally impossible. Had to reload a couple of times due to that.
That and for some reason the fridge door seemed fused shut? I could grab on to the handle absolutely fine, but it wouldn't move anywhere. (After rebooting the game I got a similar glitch but this time managed somehow to do it)
I'm unsurprised that it runs quite slowly to be honest as my graphics card really isn't up to scratch, and I'm sure it would be very fun (I've enjoyed the bits I have played) but at the moment it ends up being more frustrating than anything due to the issues above.

Main problem I had with Maze of Space wasn't the narrow view, but the INCREDIBLY slow movement of the character. It makes dodging basically impossible and backtracking very tiresome.

The other problem is that it becomes VERY easy with a decent armor and a few levels (I had 90% dodge at the end and took only 1 hit from the boss... a crit).

Though it had the item collection aspect of rpg/Castle in the sky, and the effects that the weapons did were different and diverse, it really didn't matter as you just spammed the attack button once you were next to them.

The art work was basically the only reason I bothered to finish it.

PLEASE help me. Octodad crashed before it started, it said this. "Installer integrity check has failed. Commoc causes include incomplete download and damaged media. Contact the installer's author to obtain a new copy.

More information at: hhtp://nsis.sf.net/NSIS_Error" What can I do? It installed perfectly, what happened? Please help, I really wanna play this.

I got it fixed, yay.