Space Funeral (Windows, 46MB, free) - RPGs are a thing of the past. RPGs wrapped around a parody are the new thing. Space Funeral takes itself slightly less than serious with its setting, design, and overall... well... everything. It's best not to ruin too much of the experience with details, but suffice to say, old-school RPG fans will appreciate many of the design elements, while everyone else will get hooked on the remarkably fast and non-verbose gameplay. Do yourself a favor and attend this space funeral, even if you're not an RPG fan.

Cell.Protect (Windows, 12MB, free) - A simple little shooter game with an aesthetic that will remind you a bit of flOw. Protect the cell in the center of the screen by swimming around and shooting the incoming spores. Proteins are generated after each kill and will increase your health, but everything else is up to your own vigilance. Nice, simple atmosphere makes the game remarkably pleasing, and the simple gameplay is a great hook. Note that Cell.Protect is still under development, as this isn't the final version. 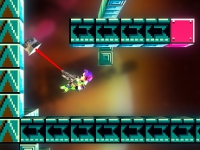 STREEMERZ 2: Godspeed Towards Oblivion (Mac/Win, 14MB, free) - Remember the grappling game from earlier this year called STREEMERZ? Well, if you're clever, you'll note that this is a sequel to said game, only now it's grown up quite a bit. Mr. Podunkian's action game continues the gameplay set up in the original, taking away your ability to jump but giving you a useful grappling hook (I mean, STREEMER) that can attach to most walls and pull you around. It's a bit short, but the action is solid, and the crude humor is so over the top, you'll roll your eyes on more than one occasion. Oh, and because of the crude-like humor, keep this one in reserve for the adults.

Soooo
Am I the first?

Just played through Space Funeral. It's pretty fun, altough hard to carry on sometimes (because of the weird graphics I think). I feel I missed a few things along the game (perhaps that led to better items and some other jokes...), but all in all it was an easy game to play. And the ending,well. I expected it at some point, but didn't think it would really be that way. Anyways, an enjoyable and quite fun experience! =)

It should be mentioned that STREEMERZ 2 was created for an Indie Kombat challenge against Chevy Ray Johnston (Skullpogo) and Sophie Houlden (Boxgame), where part of the challenge is insulting the other entrants while ripping off their games.

As someone who enjoyed STREEMERZ, I was loving everything about the sequel.

Somehow all the early difficulty (I didn't complete it) came from grappling around overhangs. Maybe it's frame rate dependent but I found them almost impossible and gave up.

Streamers just keeps crashing, which is a shame, since it looks interesting. I guess I'll just watch the walkthrough to see what happens.

Cell.Protect is not fun. Its hardly a game at all.

Does STREEMERZ 2 require having played STREEMERZ - or rather, is it better if you've played #1 first? I ask because #1 is Windows-only.

Anyone having DirectX issues with cell.protect?

i am the developer of cell.protect, the directX issues may be caused because you don't have the latest directX update, try updating directX from microsoft website.

Space Funeral was amazing although I get the feeling I'm missing loads of cool secrets.
Here's the non-obvious stuff I found:

-Saved the knight in the swamp cave with the Big Blood. Gives you a skill scroll for a move that confuses the opponent or something.
-Released a bunch of mummies into Rip-The-Blood's fortress by going past the main entrance and messing about in the side entrance first.
-Found a purple elixer in a room with a giant head looking right. Secret panel in wall where the head is looking. When used in battle does a lot of damage.
-Found a crystal skull in a pyramid, don't know what to do with it though.

Did anybody else find anything?

Sorry, still no joy. Downloaded the June 2010 End-User Runtime. Installation fails with a message about not trusting a cabinet file and checking Cryptographic services. I checked and the service is running.

Perhaps this issue is related to the fact that I am running Windows7 64-bit?

yes, the problem may be caused by win7 since Construct games have some issues with it, sorry no luck for you...