Another Ludum Dare, another bunch of cool experimental games to play! This competition's theme was "enemies as weapons", and each entry did something slightly different with the concept.

Fail-Deadly (Mac/Win/Linux, 15.5MB, free) - Here's a fun idea: a tactical game where the object isn't to win, it's for both players to destroy each other! Place units as the cursor changes. Depending on which side of the field you drop them, either the red or the blue team will take control. Don't let one side get too powerful or you'll risk winning. Er, losing. Winning the war, losing the game. That's it. Keep things balanced until the nuclear launch timer depletes, then it's mutually-assured destruction for all! A browser version is also available. And P.S.: Fail-Deadly took the highest place in the Ludum Dare voting. 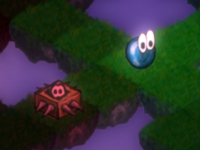 Unarmed and Dangerous (Windows, 2.2MB, free) - A lovely little isometric game that puts you in the role of a tricky little blob with eyes. You see, you don't have any weapons (unarmed, even?), so in order to beat each level, you've got to trick the sliding spike things into crashing into each other. This involves hopping around the grid, triggering them to move, hopping to safety, and figuring out how to make them meet. Quite a tricky game in some places, and very satisfying on many levels.

Isolation (Windows, 2.1MB, free) - It seems you're dead, which is a bummer. But it also seems like you're on an island with a bunch of weird creatures. This platformer takes the Ludum Dare theme literally and allows you to gather enemy items as powers, using the snake as a whip, octopus things as air bombs, etc. Use each new power to gain access to more of the island, and continue digging as deep into the game as you can. 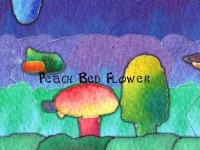 The Lair of Fungal Wonder (Mac/Win/Linux, 6.6MB, free) - It's time to scan some fungi! This unique shooter tasks you with getting close to different fungal species in order to scan them. The problem is, floating spores like to attach themselves to your craft, and once they latch on, they start firing, and this is a very delicate ecosystem. Work your way through the slowly-scrolling caverns as you avoid everything you can and scan every little mushroom in sight.

Uhm, can I get a link to the browser version of Fail Deadly?
Thanks.

It should perhaps be pointed out that Ludum Dare 18 had more than 200 entries, and this is just 4 of them.

I believe this is the web version for Fail-Deadly. Unity crashes for me so was unable to load it though.

Anyone have a walkthrough for Isolation? :) I have the double jump bomb thingy and the snake whip, can't figure out exactly what to do next after crossing the water.

Devlin, I think your next step is to make your way to the next-higher door in the tower. If you're having difficulty making it to a ledge, you jump higher when you have a moving start (and even higher once you dash-then-jump).
From there, you'll make your way into a higher entrance of the green dungeon, and you should be able to continue from there.

Turnip: It's there. It's the same link as the other files.

Does Isolation not work on Vista? I get the intro where "God" is talking to you, but after wards only get a black screen. If I press ctrl during the intro, I get the title screen but upon pressing enter, only see a brief glimpse of the game before it goes completely black.

I have trouble playing Isolation. After the intro, which was presented smoothly, I pressed enter, then the game screen appeared before quickly fading to black immediately. No keys were responding except the escape key. Is it part of the game or is it a glitch?

Any hints on getting past the ghosts in isolation? they seem to be

which kinda makes sense, but.... Also I assume that

I can get a dash power from them

but not sure how.

Evan, you'll need to upgrade your whip to continue. Instead of entering the dungeon with the ghosts, try climbing up that side of the tower. The next door in will take you to the top half of the green dungeon. Remember that you can drop bombs for a small 'double-jump' effect, and you jump higher when you're moving.