New releases from either Daniel Remar or Ben Chandler, both highly-recognizable figures in the indie community, is always cause for fun-type celebration! Their games aren't as widely known in the mainstream gaming community as they should be, giving us cool people that smug, superior feeling of having a secret source of great entertainment.

Hero Core (Windows, 2.5MB, free) - Explore the vast cave network inside of an asteroid taken over by the war machines of Tetron armed with little more than a jetpack and a blaster. Hero Core is a very Metroid-esque kind of game ripe with upgrades, enemies, and twisty, connected passageways that can only be fully accessed after defeating certain bosses or tripping generators. It's amazing how atmospheric the game is using no more than two colors and chunky pixel visuals, but you'll get pulled in right from the start. Created by Daniel Remar, author of Iji. 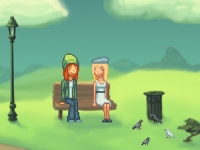 Eternally Us (Windows, 43.5MB, free) - Another short adventure game by Ben Chandler (author of Annie Android, Featherweight, and others) and Steve Poulton, Eternally Us tells the story of Flo and Amber, two close friends who have known each other since childhood. They are separated while feeding birds at the park, and it's your job to bring them back together. Eternally Us is pretty light on puzzles, but the strong tale of "love, life and friendship" is masterfully done with good voice acting and excellent visuals.

I appreciate the mention as usual, John.

However, it must be mentioned that Eternally Us was a team effort, and Steven Poulton worked at least as hard as (if not harder than) me to build this game.

Hope everyone enjoys it :)

Since DeceasedCrab started his Let's Play of Hero Core two or three days ago, I've actually been looking for it, because it does look like a pretty cool game. So, thanks for putting up a link.

I haven't played much of "Eternally Us" but what I have played is deeply moving and an absolute treat. I love Ben Chandler's work. You're right JohnB, I do feel a bit smug about being able to play this game.

Come on Jay is games, you guys constantly review tons of games that deserve it a lot less than hero core

I thought Eternally Us was a beautiful representation of the grief cycle. As someone who works with teens dealing with grief and other issues, I found the game quite moving. I'm even considering showing it to some of the clients, to see how they can relate with the characters and feelings addressed in the game.

On 'Eternally Us' am at the gates with statue and chest, cannot go any further as nothing seems to be happening. I even looked at a walkthrough but the glow worms haven't appeared. Any help anyone?

Hero Core is an EXCELLENT game. I managed to 100% it in just over an hour, and I'm definitely going to play the next two difficulties all the way through when I get a chance.

Hero Core is an absolutely fantastic game -- the retro and very fun gameplay, the music, the atmosphere, and it's even a game that people with not-so-great computers (like myself) can appreciate!

(Incidentally, I don't think this counts as a spoiler, but since this is my first comment and out of the interest of "better safe than sorry..."

Opening the herocore.sav file with Notepad out of curiosity gave me a very unexpected laugh!

I only found Hero core and Iji a few days ago but I've been playing them heaps!
They are both really addictive and have tons of replay value.

I agree Hero Core deserves a full review.
I've beaten all difficulty levels on 100%! Actually, the

Citerako difficulty level (connected to the plot of Iji) is a lot easier than Hard mode.

Tons of replay value and unlockables.

Hero Core is awesome! I beat the Normal and Annihilation modes.

I'm stuck in the Annihilator Factory area of Hard mode. Those Annihilator guys are just too difficult for me. Two different fights with them are more difficult than any bosses I have encountered.

I also vote that hero core gets its own review.

I get an error message after I walk through the door after the purple dude. The games shuts down.

I'm also stuck at the part with the gate and statue and chest. I've tried every combination of clicking on stuff I can think of and nothing happens. I even followed a walkthrough..

(why would you need to investigate objects in a certain order anyway?)

Okay, I hate to double post but I figured out the statue part...big fail on the game maker's part.

turns out you can right click to look at things; investigate everything 3x...I had to browse all the blogs about this game before someone mentioned the answer

WOW. Just played through Eternally Us and I have to admit, I was almost crying at the end. It was so perfectly crafted and made a lasting impression. Worth the download by far.

Hero Core is by the guy that did Iji?? Instadownload! I'll try to get back to tell you what I think. If I remember. If I can stop playing :)

gmpilot: Sad to hear you got stuck because of this, but the fact that you can right click to look at things is hardly a secret - it is written in the game's readme; and as for:

Having to examine everything in the scene 3x - you do not. You merely have to look at everything (I admit the plaque is perhaps a bit smaller than it could be.)

Sorry to hear that this was such a sticking point, hope you enjoyed the game anyway.

Eternally Us was an interesting game, but I couldn't help but remember the old adage "show, don't tell" as I was playing.

There's a very heavy handed sense of sermonizing and I think the story could have been more powerful without it.

A great example is at the end where the game shows you each section along with the exact stage of grief it represents...the game just needs to let the player think about this on their own. We don't need to be spoon-fed nor do we need long spiels on the importance of letting go or how hard people hang on to life. Etc.

Most of these are well worn cliches anyway.

Just let the story play out. Let the players be drawn in by the imagery and the plight of someone looking for a friend. Pair back dialog and avoid anything that sounds like it's trying to philosophize.

I really think this good game could be a fantastic game if given room to grow.

I'm aware that it's a hard line to walk and easier said than done. I also want to emphasize that I enjoyed the game and got something out of it.

Herocore was really fun! I finished it with 95% though - I just can't kill the Eliminator! Any tips, anyone?

Practice! It took me about 6 tries to finally kill him before he got away, but in the end it wasn't that hard. Once you learn his movement patterns it becomes fairly simple. You really just need to learn to lead him and shoot slightly ahead of him. Also, having the highest weapon upgrade won't hurt. ;)