It's the first Weekend Download of 2010! We thought we would go easy on you while you break in your new calendar, so all of the games below have a light download footprint. You can handle a few megs worth of games, can't you? Sure you can!

ArGeeBee (Windows, 1.8MB, free) - An excellent game by Nandrew that blends genres and ends up playing like a puzzle game crossed with The Lost Vikings. Ar, Gee and Bee each have their own abilities and control schemes. Ar moves as if the level were a top-down game, fighting monsters by running into them. Gee can move green blocks to make them match, but only one move per block. Bee can run and jump like a standard platform character, and his goal is to turn the generator on in each level. By using each character's abilities in the right order (and by conserving resources, of which each character has an ability that consumes them), make it through all 20 levels of the game. The idea feels a bit strained at first, but after you complete the tutorial missions, the fun really sets in and you won't be able to get enough of this game.

Opera Omnia (Mac/Win, 6.3MB, free) - A minimalist but brain-bending retro-styled puzzle game from indie game developer increpare. You play a historian in a fictional universe who must prove migration paths to and from cities in the past. Using a machine equipped with a timeline, you set routes with the mouse, move the time slider a bit, set more routes, and so on, until you can prove the desired population numbers in the present. It doesn't make a lot of sense in writing, and to be honest, it won't make much sense when you first play. Once you get it, though, Opera Omnia will impress you with its inventiveness and subtle but challenging gameplay. 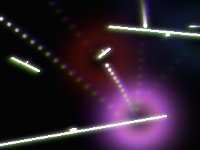 Audia (Windows, 6.1MB, free) - Not a game, but an experimental music toy by Bitfortress creator Davioware. Create ball spawners, note bars and gates on the screen, then tweak the sounds they make by moving the objects around. As the balls appear and bounce, you get music. Or, at least, you get sound. The controls are a bit mucky at first, but if you fiddle with the program for long enough, you can create some surprisingly coherent tunes, all of which can be shared using the game's save/load interface.

Opera Omnia++:
I found it less challenging than disturbing. I always kept wondering if there had been ways to disprove the professor. And technically there is an infinity - but since the preconditions and tools are fixed, the only way to do that would be not to win the game.

I can't play Audia :(
I get Runtime error and note "An unexpected error occurred and the application was terminated. We apologise for the inconvenience. Please report this problem to the application developer."

What have I done wrong?

berniem: Stick with it! ArGeeBee is an excellent game, I'm surprised how much I enjoyed it.

JohnB: I have already downloaded DirectX 9.0c so it shouldn't be a DirectX error.

JohnB: I did stick with it (and managed to solve the dreaded level almost instantly after posting :)).

But now I'm hopelessly stuck at #17 - no matter what, I always end up one resource short. :( Any hints?

haha, posting comments seems to clear up my mind. very trick, that one!

berniem: I'm hoping I'll experience the same revelation simply by posting this question, but can you share any tips on how you got past level 17 in ArGeeBee? Thanks!

I liked Opera Omninia, the 2nd level had me stumped before I figured out the game. Its hard to work from the effects to the causes that made the effects come into place

you need to start with blue, and NOT take the powerup next to you.

take the powerup in the lower left. you need to jump up to lure the 6 enemey to drop down, which will create a path for red. you may need to do some finagaling to make sure they are resting on the bottom appropriately for red to kill. Jump over and run to the exit.

hope thats enough of a hint

Without giving too much away, any tips for levels 19 or 20?

Thanks, Mystify! That was all I needed.

well, first off, the green blocks are in the way of everything, so you obviously have to start with gee.

solving the green block puzzle is really the only challenge here. a few hints:

the green bombs will explode at the end, so any leftover green blocks next to them will be destroyed.

you can't afford to blow up any enemies, however, the bomb in the lower left can be ignited safely

red will have to clear the enemies out before blues turn

destroy enough blocks with hte lower left bomb to allow the others to pass through htat region. Walling it off will not work

link to a image of it right before blue gets in the exit:

as for level 19, I have not solved it yet, but I have some thoughts

red cannot reach all the enemeies at first, so green must go before red

if red kills the boss directly, it will have to take at least 2 energy, leaving one spare for otehr things

blue cannot reach the upper platform without a boost, and the greens there cannot be made solid, implying you need a freeze mine in that area

this would take up your spare energy, and hence, you would not be able to leave any green blocks

the green block that starts between green and red cannot be removed where it is, and if it is moved up, the only direction it can go, then the only possible way to break it will seal red in. Red cannot escape beforehand since all of the enemies are blocked off by greens.

since all of these requirements:killing the boss with red, placing a mine with blue, and leaving a path with green, cannot all happen, then something else needs to be done.

I suspect this is luring the boss over to the mine to get killed, but while I can achieve that, I don't know how to activate the bomb. it may be possible for red to walk into the bomb and set it off, and win anyways because the boss is dead, but that is just a theory. I have not actually managed to test this

red suicide bombing the boss did NOT seem to work, though I was over the energy limit for blocks, it did not check it, it just lost.

Mystify was on the right track, but the trick is to lead the boss directly into the bomb. Ar is not needed at all; thus you can safely get rid of that green block between him and Gee.

yeah, suicide bombing red into the boss does not work. I managed to do it and come in under the energy limit, but it was still a failure