Exploration is most of the reason why many of us play video games. When a developer crafts an entire world for you to play in, it's easy to get giddy with the concept of probing every corner and climbing on top of every boulder. This week's selection features several games that are heavy on the discovery aspect of gaming. Whether it's a magical world filled with moonlight or a dark pixel cave, you never know what's around the corner until you look... 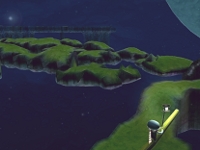 Dreamside Maroon (Windows, 62MB, free) - A truly beautiful game that will have you enchanted from the moment you start playing. A third person exploration game at its core, Dreamside Maroon is all about Aster and his wish to reach the moon. Using a lantern on a stick, Aster can control the growth of a vine in any direction, using it to climb higher and explore some of the strange floating islands in the night sky. It's a breathtaking (but brief) experience that's as magical as it is imaginative. The tiny screenshot to the right doesn't do the game justice, you should download it to see its full glory. 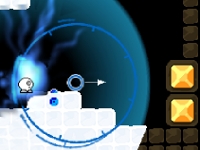 Focus (Windows, 17.5MB, free) - A brilliantly-executed platform puzzle game by Jesse Venbrux, creator of the Karoshi series of games. In Focus, you take control of a little guy trapped in a cave stuffed with traps, missile-firing robots, and lots of other baddies. Early on you learn how to use "focus mode", an ability that lets you teleport yourself anywhere the blue circle extends. Momentum is applied when you teleport, allowing you to move yourself to surprisingly exclusive parts of the screen. This mechanic is superbly implemented and the puzzles require you to think of new ways to use it in almost all of the 50 levels. As Venbrux put it himself, "very solid, difficult-but-let's-try-one-more-time gameplay".

Saut (Windows, 6.2MB, free) - If Canabalt were a downloadable game and the main character couldn't run, it would be Saut. The nighttime world is filled with hazards to avoid, and as a blocky little character who can only leap forward, it's tough to stay safe. Explore the landscape by controlling the distance of your jump with the [spacebar]. It's difficult to do at first, but once you get the physics down, you'll have a great time!

Dreamside Maroon tells me I need Open GL 2.0. What is it and does it interfere with anything I already have on my computer?

I'm at the series of levels where there are just white misslebots progressing in power, and 4 sets of 4 blocks, with spikes all on the floor and a blue gem, and the focus sphere keeps flashing for literally no reason. And I'm starting to get annoyed at this too, because now the levels are dependent on reflexes, not puzzle solving. But the flashing hasn't happened before, so I want to know if it's a bug or something.

i wish Dreamside Maroon worked on 64bit vista... i got the same error message Matt got but i just assumed it was because its not compatible with 64bit... if anyone has any updates as to how we could get this to play for us then please let us kno... i'm really kind of hyped up for this game lolz thanks :)

Dreamside Maroon is a fantastic game. The controls are a bit squiggly at first, but once you grasp them it becomes awesome. The ending gave me goosebumps.

It feels like something That Game Company would make--and that's very high praise from me.

I can't get Dreamside Maroon to work. It installed fine as far as I can tell, but when I run it, I get a short loading screen, then music starts playing and I get a blank screen and the process stops responding. Using 32bit XP Pro.

Focus seems like a fun game, but i'm stuck already with the first traveling laser! Can't for the life of me figure how to get past the traveling laser to the exit… I keep trying different things but I just can't seem to get it. I'm sure its right in front of me but … any hints ?

I wonder if along with the "tested for windows vista" we could also get a "tested with 32/64 bit, because that really messed me over as well. Oh, the sacrifices us technologically savvy must face!

Most of the comments have been for dreamside maroon and focus (which from what i've read, I'm going to HAVE to give a try)

I had a LOT of fun with Saut! The physics were great and I loved the one button control. My first playthrough I got 196 deaths, and on my second, I only got 87 deaths and VIP status. DEFINATELY worth a try if you haven't.

sorry for the double post but i cant get focus to work. I downloaded it, unzipped it, then tried to run it. I got:
"ERROR in
action number 1
of Alarm Event for alarm 0
for object objZeroZero:

When the laser is moving towards you, activate your Focus bubble and move the circle to the edge closest to the laser. Wait until the laser passes the circle and then release; you'll pop out on the other side.

Having technical issues with Saut. It works just perfectly on the title screen, but when I jump out of the "made for the minimalist competition" screen the screen turns black and nothing happens.

Thanks Neddo ... i must have tried that a few times, did what you said and i popped out on the other side ... thanks ..

I just finished Focus with almost 400 deaths. First of all, I'd like to thank my painfully slow computer for making the game lag whenever I activated the Focus thing: while I could just turn off the distortion effect to stop the lag, I honestly doubt the later levels would be possible with the game running at full speed. Second of all... wait, there is no second of all. I'll just say this game is hard. Insanely hard. So, if you excuse me, I'll go play something easier. Like IWBTG.

Saut (how do you pronounce that?) is just awesome. I love the one-button controls, and the cool soundtrack. Very challenging and fun. I haven't beaten it yet, though.

I'm having the same trouble with Dreamside Maroon as the others. :/ It kind of sucks because the concept sounds awesome and it installed fine... D:

Dreamside maroon.. kinda COOL!
Really haven't played anything like it before. :D

In Dreamside Maroon, I can install and load it fine but when I start playing am I supposed to get a screen filled just with stars..? Using the movement controls and growing the vine make me move around in the stars which I did for ages with nothing much happening but then what...? is it a graphics problem ? help :(

I'm having the same problem as Sheer Cold in Saut. in fact, it turns blank if you don't do anything! That means I can't play any of these games. DM, because the graphical requirments are cleary 1,000,000 times more then the graphics card I have, Focus because I already watched a Let's Play of it, and Saut because it's broken.

Mh, kinda disappointed with focus. Yes, 50 levels and so on, but by now, I am really bored because it is really repetitive by now.

Uh, yeah. ANOTHER screen with mines and an EVEN FAASTER SHOOTING bot with even FASTER ROTATING missles. That's the FIRST (in fact, around third) time this happens in the game.

He really should have done it like with karoshi, fewer levels, but about every level is something new.

Downloaded and extracted Focus, when it's done loading an error message pops up, saying:

I really like Focus a lot. Ok, i agree it's punishingly hard towards the end (um actually a bit before that) but it's a great dynamic. Actually Jesse Venburx does say in his latest post (http://www.venbrux.com/blog/?p=117) that he has a bit of conflict with the difficulty but it's good that he sometimes makes us work! Excellent new game dynamic though. Let's set the stop watch and see when the first 'homage' appears.

Dreamside Maroon is beautiful. I can't wait to get a good hour to expliore although the controls are a little fiddly to get used to.

Saut... Well if we're talking about difficulty levels!!! I am having problems with it but that's more me and my impatience. I love the look of it and look forward to going back to it.

Focus has too many error messages.

Focus has so much potential (great idea, nice implementation, nice music also), and ends up so frustrating it is infuriating. The level design choice made after level 10 or so I find inept (and incomprehensible). The gameplay turns into nothing more but a frantic keyboard tapfest, which would be fine for a few intense levels - but not for 40 in a row which are just clones of each other, with more and faster missiles. I ended up deleting the game from my computer in a rage around level 35, which I think was compounded by the high expectations I had from the first levels. I can only hope there will be a Focus 2.0 where the promising base mechanic is explored in different directions.

For anybody having trouble running Dreamside Maroon, could you send us an email at dreamside.maroon.game[at]gmail[dot]com. Put "BUG" in the subject, and list what the bug is and your system specs. We've had a couple other reports, but the more info the better. Hopefully we can nail down what is wrong. Thanks for the support :)

I'm going to echo some other comments on here. I liked Focus...for a while. Then it got to be just more and more of the same, only harder. Give me puzzles, not random running away from burning stuff or stupid fast missiles. Not sure I really care to finish it at this point.

I know this sounds a little nitpicky, but shouldn't the word "Canabalt" in the description of Saut be a hyperlink to the review of Canabalt? Just throwing that out there.