RUUUNNNN!!!!! Escape games of the non-point-and-click variety are well-represented in the indie gaming community. What could be more basic than "get away from the thing that's chasing you"? Three of this weekend's titles focus on running away from something really scary (or, er, being that scary thing). And you'll have a good time doing just that!

Restraining Order (Windows, 40MB, free) - Earlier this year, we featured a lovely little game by the name of Restraining Order. Well, now the game's all grown up and ready to impress with bigger and better everything! This running-type game is more about chasing, as you play a monster of a character out to break his restraining order. Leap over cops or attack them with your claws as you slowly close the gap between you and your target. If you get caught, you don't have to start the level over, removing that pesky feeling of failure, and each level something new is added, like new police with different abilities. There's a lot of wild music, a lot of crazy visual effects, and even more wacko stuff once you charge through a level or two. So. Worth. Beating! 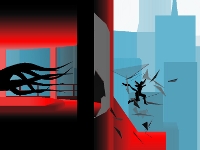 rComplex (Windows, 47MB, free) - Similar to Canabalt in a number of ways, rComplex is one of those "jump and slide to avoid stuff" games where your character is constantly running to the right. This time, though, you're running from a mass of tentacles and you've got a shotgun (with only twelve bullets) to fend it off temporarily. Created by two people in about a week, this proof-of-concept demo is surprisingly full of style and polish. 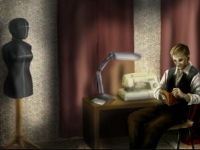 The Marionette (Windows, 95.7MB, free) - A first person adventure game that puts you in the role of Martin, a sculptor about to complete his latest work when he receives a mysterious package. After opening it he loses consciousness, waking up later to find himself outside an unfamiliar house. Point and click your way through this dark game, gathering items and answers as you do. It's a full length game, so expect to drop a few hours into it and do a fair amount of reading and exploration. The payoff is a rich atmosphere and intriguing puzzles. 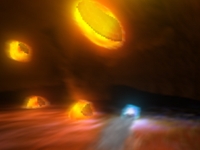 Igneous (Windows, 114MB, free) - Imagine you're a cube sitting inside of a volcano. Now imagine a ball of fire is chasing you. What would you do? Run, of course. Igneous is a beautiful game where your only goal is to run away from the ever-present ball of flames. Level design is a bit bland, and after a few run-throughs you'll wonder if there's anything more to the game than simple avoidance (there isn't, really, but it does get much more exciting). The lighting effects are beyond gorgeous and must be seen to be understood. Worth a (free!) romp or two just for that! Created by a team of students at DigiPen.

The Marionnette is great, both storywise and artwise, but sometimes, the things you have to do barely makes any sense. I know it's some kind of surreal world, but I often had to take wild guesses at actions seemingly random, that would only make sense once discovered.

The marionette is a really fascinating game, at least on a visual basis (macabre overtones aside). In general, I never really notice the work and effort put into a game's visuals unless they are something almost obscenely spectacular (IE: a majority of what comes out for the PC in the non-casual market nowadays.) But when the person making the game forgoes all other methods, and instead picks up a brush and paint, it offers a layer of depth that under any other circumstances would be impossible to achieve. There is a lot of debate in the artistic community as to whether or not video games should be considered a form of art. This game is another example of why they should, in the most literal sense.

I'm not sure what to think about Marionette. The artwork is gorgeous but gameplay is a little lacking. And for some reason it shut down on me half way through! Oh well.

Igneous is very well-made. I love it. It's too short for me, and the provided levels get old fast, but the fast paced action of it makes for an extremely exciting game while it lasts.

I really like The Marionette, although lots of people probably would say it's too easy. For me, it's just about the first game I've managed to run through without cheating, not even a little bit. Until now, that is!
I'm just at the final scene and I'm missing

one piece of the scrapbook page.


Are you supposed to have picked it up along the way? If so, where?

Is it in the room with the dead guy? Or can you go backwards? I've tried the tunnel but just walked for ages...

Do I really have to start all over and look for that little ittybitty thing, that would really annoy me.

the scrapbook page to continue at all, or even to get all the endings, unless you're really that curious to read what it says.

The game allows you to continue without solving every available puzzles.

But, in that case, how do you get past

the creepy botguy in the chess room? I only got four traps, and when I put them out side by side, he walks through one of them, but if I place them in pairs of two, he just walks around them. Is there a hint in the little dollhouse-thingy outside?

There's a hint in the dollhouse indeed.

Your weapons are traps; you therefore need to trap the mannequin.

The dollhouse shows the possible movement of the mannequin.

The chess pieces show where to place some of the traps.

Wait for the mannequin to make a move first. Then, place a trap direftly in front of it. It will move to sidestep the trap. Place another trap directly in front of it again. Eventually it will be cornered and forced to step into a trap. It's easy then to place your last trap in front of it to kill it.

I am having trouble to download Restraining Order, as clicking the link leads me to a page that never loads. I've tried to clear the cache and cookies, but that didn't solve it. I think this is related with the URL, since sites ending in .ca have never worked for me.